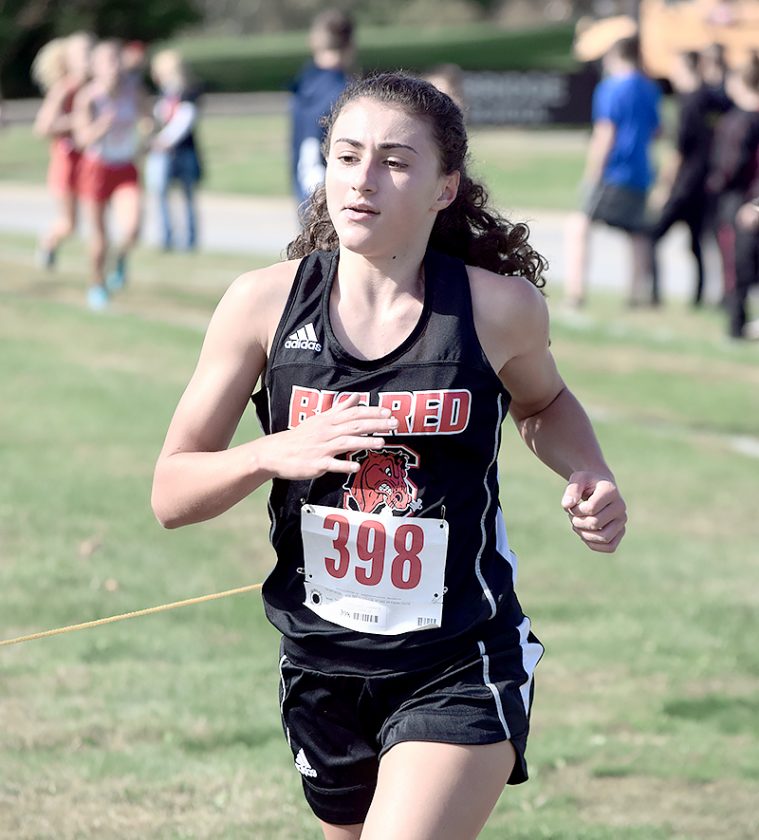 CAMBRIDGE — It’s reached the point of the cross country season where place is more important than time.

Several area harriers and teams produced places that were good enough to extend their season for at least one more week during action at Saturday’s Eastern District Cross Country championship held on the sun-drenched Cambridge City Schools campus.

Martins Ferry and Buckeye Trail’s girls advanced collectively to the regional, which will unfold next Saturday at Pickerington North High School, in Division III. In Division II, St. Clairsville qualified to run again as a squad.

Along with those teams, six individuals will be in the mix at the regional.

St. Clairsville’s girls finished seventh overall with 222 points to earn a trip to next week. The Red Devils were led by individual qualifiers Allyson Evonek, who was 12th overall and junior Maggie Marody, who was 18th. They ran times of 20:47 and 21:25, respectively.

Other Red Devils to figure into the team score were sophomore Haven Brak, sophomore Shay Baker and junior Victoria Trouten.

Steubenville’s Anastasia Crisante was the first runner not from Tuscarawas Valley to cross the line. She was fourth overall.

Martins Ferry finished third with 91 points and had three runners qualify in the individual portion of the event, too.

The Purple Riders were led by freshman Josie Hancock, who finished fourth overall in 20:52. Senior Chloe Hill was fifth in 20:53. Sophomore Hannah Hupp was 11th in 21:35.

Other Riders to figure in the team score were freshman Jaqulynn Gill, who was 25th overall, and senior Hope Lewis.

“I felt like the girls had a really solid race,” Ferry head coach Chrissy Lewis said. “The girls seem solid and strong. We’re recovering from those injuries earlier in the season. We’re going to fight and scrap and do the best that we can next week.”

Buckeye Trail grabbed the fourth of five team slots with 141 points. The Warriors were led by All-Ohioan Kathryn Williams. She took her first steps toward a return trip to National Trail Raceway with a district championship. She toured the 3.1 mile course in 19:40, which was 56 seconds faster than her nearest competitor.

The only other area team to qualify multiple runners to the regional was Bellaire, which will send senior Katrina Davis and freshman Bethany McElfresh.

Davis posted a sixth-place overall finish in 21:02, while McElfresh was one spot and 21 seconds behind Davis.

Returning state qualifier Livi Beard finished second overall to earn a trip to Fairfield County. She posted a 20:36 for the silver medal.

Before any thoughts of the regional, which is slated for next Saturday at Pickerington North High School, a 3.1 mile race stood in the way.

When the dust settled, two teams and four individuals are returning to practice this week to prepare to make a push toward the state meet, which is slated for Nov. 2 at National Trail Raceway in Hebron.

Similarly to the girls, the Martins Ferry boys will be heading to the regional meet. The Purple Riders earned the third-place spot in the regional with 122 points.

Coach Chrissy Lewis’ team, which won the OVAC 4A title two weeks ago in Guernsey County, was thrown a curveball before the race began. One of the Riders’ top seven runners informed his coach that he couldn’t go because of an injury. Lewis quickly got her “eighth runner” warmed up and to the line.

“All in all, we ran pretty well,” Lewis said. “We had our guys who we are used to being back up in the front back up there. We had our guy ready to go, he jumped in there and ran well. It was a little chaotic.”

As for what lies ahead, the Purple Riders head coach knows her team will have to step it up even further.

“We’ve told the kids it would be a miracle (to qualify to state), but we’re open to miracles,” Lewis said. “I know these kids will do the best that they can. We’re going to have to rest this week to give ourselves a chance. I don’t think it’s physical, but we’ll have to keep calm.”

Other Ferrians to figure into the scoring were senior Michael Buksa and sophomore Trent Lewis.

Harrison Central will send a pair of runners. Junior Logan Laney was 11th overall in 17:28 and senior Eric Leech was 22nd in 17:53.

Bellaire’s boys, which won the OVAC Class 3A title earlier this month on this very course, finished with 113 points to snag the final qualifying spot in third overall.

The Big Reds were led by the meet’s overall runner-up in junior Jacob Defibaugh, who ran a 17:01 and was 11 seconds back of Caldwell’s Mason Ackley.

Junior Brenen Craig and freshman Andrew Rupp were the second and third Bellaire runners to cross the line in 16th and 17, respectively. Bellaire’s other scorers were freshman Devin Schramm and junior Ryan Hicks.

Barnesville’s Tyler Jenkins earned a berth in the regional by virtue of finishing 10th in 17:51.