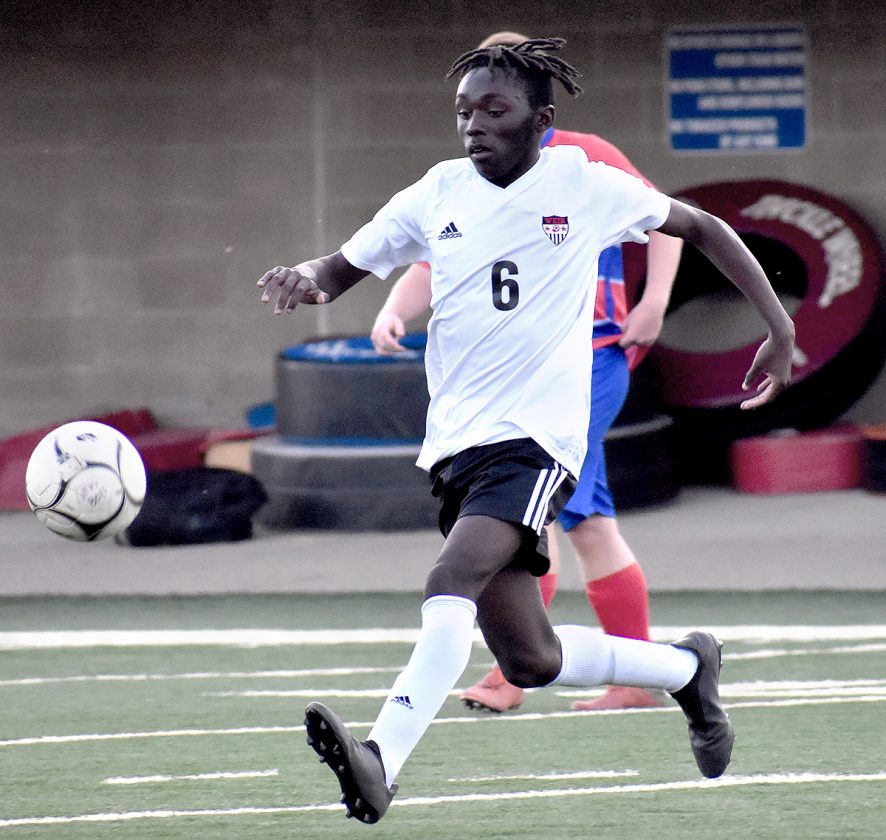 WHEELING — Throughout the season, Wheeling Park coach Mario Julian has noticed that even though his team has played strong in the first half, his players come out and play a stronger second half.

Such was the case again Tuesday evening against Weir. The Patriots scored four goals in the second half — including three in the first 10 minutes — as they defeated the Red Riders, 5-0, at Wheeling Island Stadium.

“It’s been a theme all year, and we’re getting ready for playoffs,” Julian said about having a stronger second half than first. “We do have to start playing better in the first half if we want to go a long distance in the playoffs. We talk about it all the time. I don’t know what it is. I don’t know if it’s the few adjustments we make at halftime help that much. I think we have to come out in the first 40 minutes and play a little better.”

Wheeling Park (17-1) wasted little time in the second half. Cole Meredith found the back of the net just less than three minutes in to put the score at 2-0. Meredith also scored the final goal for the Patriots.

Andrew Glass also got in on the scoring about three minutes later. Jason Pennybacker capped the scoring rampage in the first 10 minutes, as he put the score at 4-0 with 30:33 left to go in the game,.

“I didn’t think we played that poorly in the first half. I think we were taking long- range shots and had a little bit lack of focus in the final third,” Julian said. “But, then I had to let them know that’s not the way we play. We got to get more opportunities in the attack and get closer range shots. In the second half, we had closer range shots for sure.”

The Patriots had a few opportunities in the first half, as Brody Wall had a good look on goal, but the ball hit the top of the post. Less than a minute later, Pennybacker also attempted a shot, but the kick went a little right.

With 22:28 left in the first half, Ethan Williams ended the scoring drought, as he tallied the first goal for the Patriots.

“I was real happy with the first half,” Weir (11-6-1) coach Matt Kopp said. “I went in and told them that it’s the second-best team in the state, ranking-wise. They might be the best team in the state, but I think it obviously comes down to case of fitness. We’ve had games here, and there where people were playing on and off with injury. It’s hard to keep up with a team that’s clearly fit in comparison to us that seemed tired in the second half. I think the will to play was still there, but it’s just difficult to play with their skill and fitness as time grew on.”

For the Patriots, Zach Calvert also had three saves.

“Weir is a prideful program,” Julian said. “They’re going to play you hard no matter what their record is. We knew they were the second seed in the OVAC tournament. We feel really good where we’re at, except we would like to get a few goals in the first half.”

Despite their recent setbacks, the Red Riders are the top seed in the WVSSAC Class AA/A sectional tournament. They will host a game on Oct. 23 against the lowest remaining seed.

No. 6 seed Magnolia travels to third-seeded Oak Glen on Monday, while No. 5 seed Tyler Consolidated heads to fourth-seeded Trinity Christian. Wheeling Central is the second seed and will host against the higher remaining seed on Oct. 23.

The sectional final is on Oct. 26 at the highest remaining seed’s field.