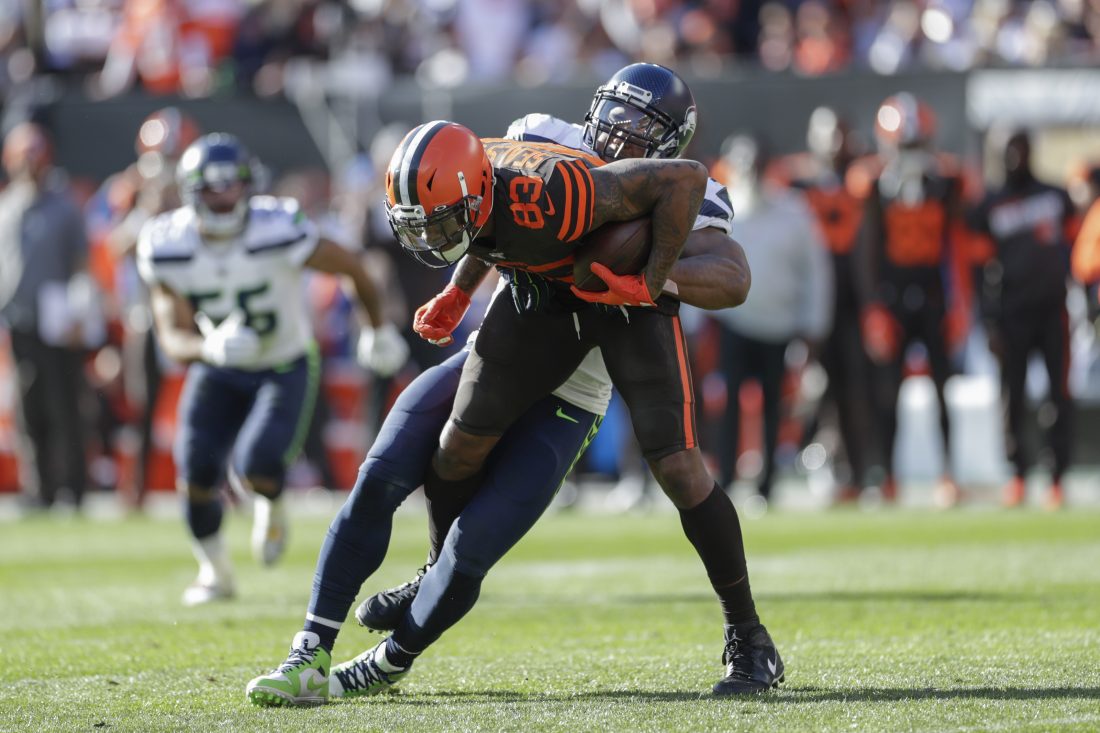 Cleveland Browns Ricky Seals-Jones (83) is tackled by Seattle Seahawks middle linebacker Bobby Wagner (54) after a pass reception during the second half of an NFL football game, Sunday, Oct. 13, 2019, in Cleveland. (AP Photo/Ron Schwane)

CLEVELAND (AP) — As rap music thumped from the large sound-system speakers sitting atop lockers at one end of the room, several Seattle players stood on their chairs and danced.

This was their party.

On the road, the Seahawks make themselves at home.

Russell Wilson threw two TD passes and ran for one, Seattle’s defense forced four turnovers and Chris Carson scored on a 1-yard touchdown run with 3:30 left as the Seahawks rallied for a 32-28 win Sunday over the mistake-prone Browns.

The Seahawks (5-1), who are 3-0 on the road for the first time in 39 years, gave up touchdowns on Cleveland’s first three possessions before storming back.

“If we want to be a championship team, we have to win these types of game,” Wilson said.

He connected with wide receiver Jaron Brown on his scoring passes, and Seattle’s cool quarterback scampered 16 yards for a TD. The Seahawks, who have shown a knack for winning tight games, were last unbeaten in their first three road games in 1980, when they went 4-12.

“These guys are all together,” said Seattle coach Pete Carroll. “They’re committed. They care, and they’re playing for each other.”

The Browns (2-4) were hurt by their own miscues. They couldn’t overcome three interceptions, a fumble, blocked punt or quarterback Baker Mayfield’s hip injury.

Cleveland fell to 0-3 at FirstEnergy Stadium, and as Browns fans filed out, many were wondering what has become of a season they couldn’t wait to get started.

The Browns also came out on the short end of several questionable calls by an officiating crew that had its hands full.

“The refs are never an excuse,” Mayfield said. “I will probably get fined for saying this, but it was pretty bad today. … It ticks me off.”

Mayfield’s three picks raised his NFL-leading total to 11, and the second-year QB still hasn’t found a rhythm. Trying to bring the Browns back late, Mayfield, who went to the locker room in the third quarter to be evaluated, was intercepted by Seattle’s K.J. Wright with 2:41 remaining.

The Seahawks defenders celebrated the game-clinching turnover in front of Cleveland’s Dawg Pound section, which pelted them with cans and other debris.

Wilson then ran out the clock as the Seahawks moved to 5-1 for the third time.

“It was a crazy game,” Wilson said. “It was a battle. We were down 20-6 against a good football team with a lot of great players. We kept believing something great was going to happen and, sure enough, it did. In the fourth quarter we found a way again.”

Carson’s short TD burst capped an efficient 79-yard drive by Wilson, who showed his usual poise and precision after the Browns had taken a 28-25 lead on Nick Chubb’s 3-yard TD run.

Wilson finished 23 of 33 for 299 yards and stayed error-free. He has yet to throw an interception this season, and to this point, the eight-year veteran is outplaying every other QB in the league.

Mayfield, on the other hand, is struggling. He completed 22 of 37 passes for 249 yards, but he forced several throws and made a deliberate attempt to get the ball to Odell Beckham Jr., who finished with six catches for 101 yards.

Carson gained 124 yards on 24 carries for the Seahawks, who lost tight end Will Dissly in the first half with an Achilles injury. Dissly, whose rookie season was ended by a knee injury, left the stadium on crutches with his foot in an immobilizing boot.

Even after the Browns scored on their first three drives and opened a 20-6 lead, Wilson wasn’t rattled.

He hung in the pocket and took a big hit from linebacker Joe Schobert — his teammate at Wisconsin — while completing a 17-yard TD pass with 22 seconds left in the half to pull the Seahawks within 20-18. Seattle’s 2-point conversion failed, but the Seahawks were back in it after the Browns got greedy moments earlier.

Instead of running the ball, first-year coach Freddie Kitchens called a pass play and Mayfield forced one into the end zone that was behind Jarvis Landry, tipped and intercepted by safety Tedric Thompson.

“You can’t move the ball if you turn the ball over,” Kitchens said. “Simple as that. Execution. I have to call better plays, but it is execution and turning the ball over.”

The Seahawks had one of the season’s best TD celebrations when four players lined up and mimicked boy band N’Sync’s “Bye, Bye, Bye,” complete with choreographed dance moves.

The Browns scored on the first play of the second quarter to go up 20-6. It was the first time Seattle allowed an opponent to score touchdowns on its first three drives since Dallas did it in 2008.

Mayfield didn’t participate in the pregame coin toss, his absence notable since it came just days after San Francisco cornerback Richard Sherman said the quarterback disrespected him by not shaking hands prior to kickoff.

Browns: Mayfield downplayed his hip injury, which happened on a first-half scramble. “It hurts, but it’s a physical game of football,” he said. … DT Daniel Ekuale sustained a head injury in the closing minutes.

Browns: Have a bye next week before traveling to New England on Oct. 27.