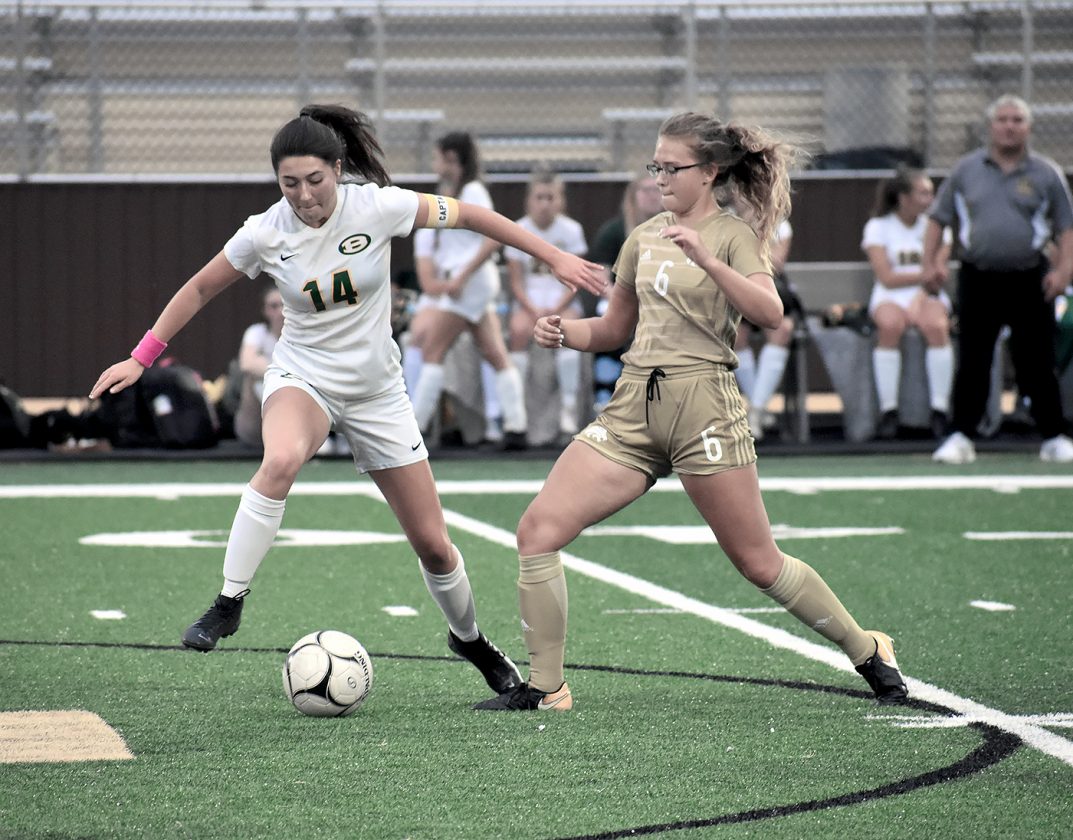 MOUNDSVILLE — It was just another day at the office for Zara Zervos. The John Marshall junior used her speed to her advantage and tallied two goals en route to a 2-0 victory over Brooke during a West Virginia Class AAA Region 1, Sectional 1 semifinal matchup Monday evening at Monarch Stadium.

The victory for the Monarchs sets up a match against Wheeling Park for the sectional championship Wednesday at Wheeling Island Stadium.

“I think the girls did a really nice job of position playing. They stayed where they belonged and communicated extremely well,” John Marshall coach Ted Zervos said. “They never got frazzled at any point and time even when there was some pressure on. They just played their positions, made some connections and cleared the ball out when needed. They just played together as a team. There didn’t seem to be any sense of urgency, and that was nice. It was kind of a controlled pace all evening.”

Zara Zervos put the first point on the board for the Monarchs with about 16:14 to go in the first half. She used her speed and got behind the Brooke defense. Closing in on the goal, the Brooke keeper came out to defend. Zara Zervos, then went right and buried it in the back of the net.

She tallied her second goal of the game with 2:10 left in the first half off of a Tessa Tordella assist.

The Bruins, though, had a few opportunities to cut the lead before the half. On the possession after the Monarchs’ second goal, Brooke had a close look at the goal. However, John Marshall goalkeeper Isabella Anderson did not budge and denied the Bruins of a goal. It was her eighth save of the night as she had a busy first half. The junior keeper finished with 12 total saves.

“She’s one of the better goalkeepers I’ve seen this year if not the best,” Coach Zervos said. “She just works her tail off. She communicates and is the general back there that tells the defense where they need to be. Her instinct, her reactions are just lightning quick. She’s a hard one to get a ball past when she is on her game.”

Brooke had another chance to cut its deficit in half before halftime, but a shot hit the crossbar with about 2:50 before intermission.

“We controlled the first half, we made two mistakes and they scored on them,” Brooke coach Elias Hannaoui said. “They took advantage of our mistakes. We tried to make changes in the second, made switches, but their goalie had an awesome game. She made some awesome saves. We took a lot of shots on goal and nothing went past her.

“(Zara), we couldn’t stop her and she knows where to stand on the field. I’m proud of the girls. They came along, they tried hard and never gave up, but it its what it is. Now we have put this behind us and think about next year.”