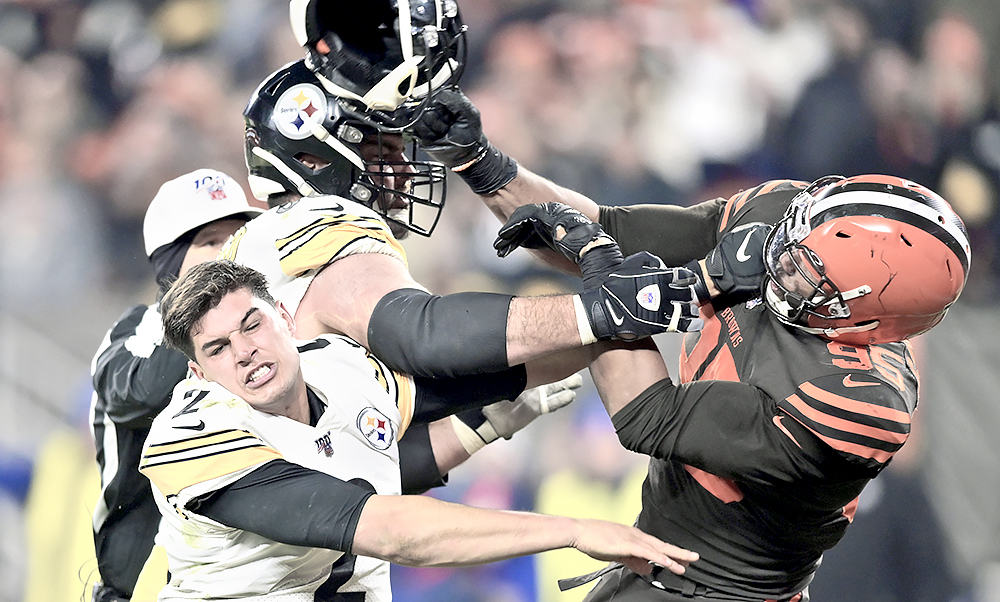 CLEVELAND — The Browns were seconds away from a season-changing win when Myles Garrett lost his composure in a moment of rage rarely seen on an NFL field.

Garrett tore off Pittsburgh quarterback Mason Rudolph’s helmet, wildly swung it and hit the QB in the head, a shocking act that will likely result in a lengthy suspension for Cleveland’s star defensive end and perhaps cost the Browns any chance of making the playoffs.

Garrett’s outburst came with 8 seconds left in Cleveland’s 21-7 win over the rival Steelers on Thursday night, a game that will not be remembered for anything that happened in the first 59 minutes.

Garrett faces a stiff NFL suspension and Steelers center Maurkice Pouncey will likely be disciplined for kicking Garrett in the head.

“I lost my cool and I regret it,” Garrett said. “It’s going to come back to hurt our team. The guys who jumped into the scrum, I appreciate my team having my back, but it never should have gotten to that point.

Players from both sidelines spilled on the field during the melee, which began after Garrett wrestled Rudolph to the ground well after he completed a short pass on a meaningless play. Garrett, Pouncey and Browns defensive tackle Larry Ogunjobi were ejected.

Rudolph got his hand on Garrett’s helmet first as the players grappled on the ground, but Garrett escalated the brawl after he got back on his feet. He yanked the helmet off Rudolph and slammed it into the top of the quarterback’s head.

Rudolph threw his arms in the air in disbelief after the impact, and Pouncey retaliated by punching and kicking Garrett.

“I thought it was pretty cowardly and bush league,” Rudolph said. “I’m not going to back down from any bully. I felt like I had a bone to pick with him. I appreciate the line always having my back, but I was angry.”

Mayfield said he didn’t speak with Garrett, but he expects his teammate to be accountable.

“This is a physical, violent game and there’s moments if you don’t keep your cool, bad things can happen and he knows that. It’s inexcusable and he knows that,” Mayfield said. “There’s no other way around it, he’s going to own up to it and he’s going to handle it and this locker room is going to have to come together because this is going to be a soap opera on the outside much like the media has portrayed us to be for the whole season.”

The incident overshadowed a win that put Cleveland back in the playoff picture and breathed some life into a season that had been slipping away.

Browns receiver Odell Beckham Jr. was shown replays of the brawl on the NFL Network set.

“It’s ugly,” Beckham said. “It’s not something we want in the NFL.”

Rudolph, a second-year player who took over for the injured Ben Roethlisberger in Week 2, has already missed time this season with a concussion after he was knocked unconscious from a helmet-to-helmet hit by Baltimore Ravens safety Earl Thomas.

Several Pittsburgh players were eager to give their views on what happened.

“I don’t know how he got to the point that it’s OK to use a helmet as a weapon,” said Steelers defensive tackle Cameron Heyward. “I know we play a sport that’s violent, but it should never have gotten handled like that. That dumb stuff shouldn’t be allowed.

“For someone to use a helmet as a weapon is uncalled for. I know you’ve got to ask me the question, but he’s got to answer for that.”

Before the ugly ending, Mayfield threw two touchdown passes and scored on a 1-yard plunge as Cleveland held on to defeat the banged-up Steelers for just the fourth time in 10 years and improved to 2-0 in the AFC North for the first time.

The Browns (4-6) have won two in a row after dropping four straight, a skid that put coach Freddie Kitchens’ job in jeopardy.

But Mayfield’s 8-yard TD pass to undrafted rookie tight end Stephen Carlson with 5:25 left helped clinch a rare win over the rival Steelers. And a softer upcoming schedule has eased the pressure on Kitchens and given the Browns some hope they can end the NFL’s longest playoff drought.

The loss was especially damaging to the Steelers (5-5).

Without them, Rudolph didn’t have enough help and threw four interceptions.

In the third quarter, Steelers rookie wide receiver Diontae Johnson got concussed from a vicious hit by Browns safety Damarious Randall, who was ejected.

Browns running back Nick Chubb had 92 yards and went over 1,000 this season.

Despite the injuries, the Steelers were within 14-7 entering the fourth quarter after Rudolph connected with Jaylen Samuels for a 3-yard touchdown pass.

The Browns have been wrapped up in drama all season, and that was the case again Thursday as the team released wide receiver Antonio Callaway just hours before kickoff.

Callaway, who served a four-game suspension for violating the NFL’s substance-abuse policy earlier this season, was benched by Kitchens for arriving late to Sunday’s game against Buffalo.

The Browns are one of 11 teams committed to attending former quarterback Colin Kaepernick’s workout in Atlanta this weekend.

Owner Dee Haslam said didn’t know who from the team would be at the workout to evaluate Kaepernick, who hasn’t played since 2016 and became a polarizing figure when he kneeled during the national anthem to protest social and racial injustice.

“We are in support of anybody getting an opportunity to play football,” Haslam said. “We love that.”

Steelers: Along with the others, Pittsburgh lost LB Olasunkanmi Adeniyi (concussion) and CB Artie Burns (knee).

Browns: Safety Morgan Burnett sustained an Achilles injury in the first half and didn’t return.

Steelers LB T.J. Watt took down Mayfield in the third quarter, giving him eight sacks in five career contests against the Browns. Watt has at least one-half sack in seven straight games, the longest active streak in the NFL. 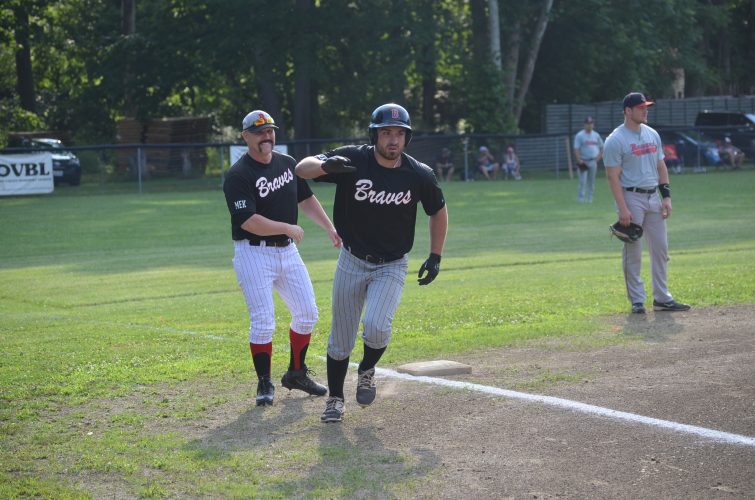