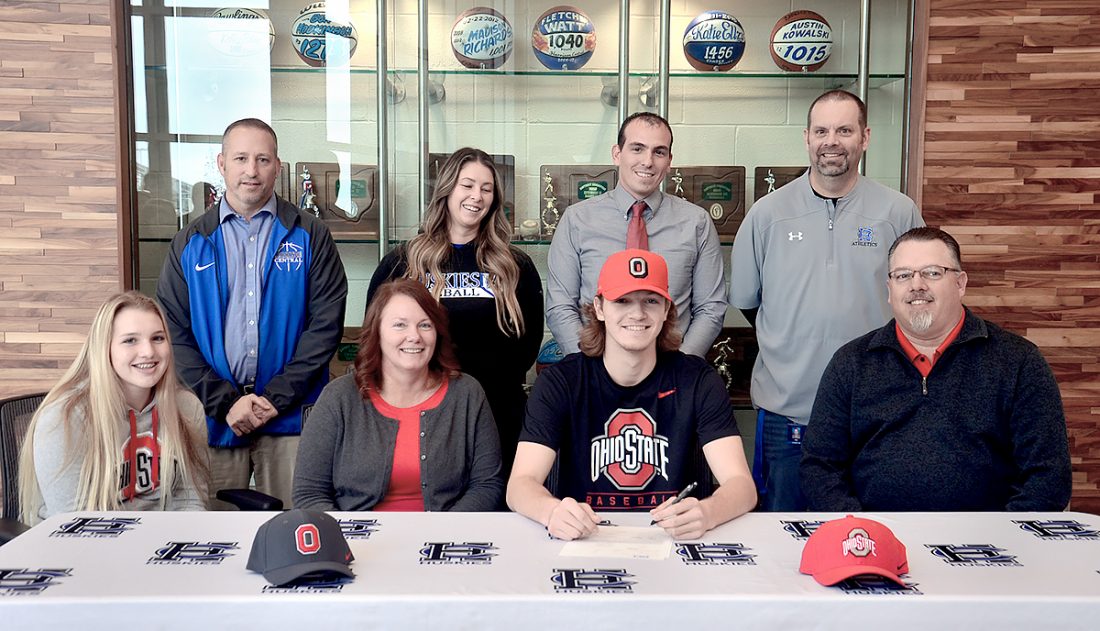 CADIZ — Andrew Clelland can finally take a deep breath and exhale. It seems like the Harrison Central senior has been holding his breath for quite some time while waiting to realize his life-long dream.

With the simple stroke of a pen Wednesday afternoon, Clelland, surrounded by family members, friends and school administrators, signed his NCAA National Letter of Intent to attend Ohio State University on a baseball scholarship. He had committed to the Buckeyes in February after withdrawing an earlier commitment to the University of Pittsburgh.

“I can relax a little bit now, more than I could before,” the 6-foot-6, 195-pound Clelland said. “It’s definitely a great feeling for sure. It’s something that I’ve dreamed about my whole life really. To be able to get this done and out of the way is a big relief.”

“When I went up there for my visit and then a camp, it was an entirely different feeling,” he said. “I could feel the brotherhood. I could feel the connections the players had, and the coaching staff was great.”

The Huskies’ standout won’t be the only Ohio Valley product on the Buckeyes roster in the fall. He will join Steubenville’s Alec Taylor (redshirt freshman outfielder) and the Toronto duo of Nolan Clegg (sophomore outfielder) and Nate Karaffa (freshman infielder).

When asked what position Ohio State was projecting him at, he said, “As of right now, I’m going there as a two-way (player) at pitcher and first base. I’d like to think I’m alright at both, but I love to pitch. Pitching is my thing.”

Clelland, who will begin classes in June, said he will have to get bigger and stronger to compete at the NCAA Division I level. His fastball has been clocked at 90 miles per hour on the radar gun by various scouts, but he’s not limited to it.

“You’ve always got your fastballs (a 2-seam and a 4-seam), but I love my changeup,” he noted. “My curveball is also a good option.”

Not only a standout on the baseball diamond, Clelland ranks in the top five of his graduating class. According to Prep Baseball report, Clelland is the third-ranked player overall in Ohio’s Class of 2020. He also is the second-rated right-handed pitcher. Nationally, he ranks 266th and 88th.

“It’s a great moment for our program, but I think, when it comes to these moments, it’s a bigger moment for Andrew and his family,” Harrison Central head baseball coach Mike Valesko said. “We’re just happy to be a part of it. We just want to do anything we can to help him a long the way.

“Of course we’re excited for the Harrison Central program, but moreso, we kind of take this moment to just recognize Andrew and his family and all the work and time that they’ve put into this.”

Valesko said with Clelland getting this (signing) out of the way, it should allow him to relax some.

“Ever since he’s been in eighth grade we knew of the talent he had,” Valesko added. “People have to realize that it is always a work in progress. Everybody wants that finished project when he’s in the eighth grade or a freshman, but that’s just not how it works. It’s been a process, but, without question, he’s been the most talented player we’ve had come through here.

“With the work he has put in this offseason, I can’t wait to see the season he has this year. I think he’s going to really explode on the scene and just have a monstrous season. Now he’s got the weight of the world off of his shoulders, so he can go out and have some fun.”

Clelland will be eligible for the Major League Baseball draft next summer. While his high school numbers haven’t been eye-popping, it is his play during AAU competition in the summer that has scouts drooling.

He acquired his baseball talents naturally as his father, Ricky, was a high school phenom at Buckeye North. He signed to attend Auburn University before getting drafted in the fifth round that same year. He eventually pitched in the farm systems of the Montreal Expos and Los Angeles Dodgers.

In addition to his father, he resides in Harrisville with his mother, Amy, and sisters, Lizzy, a freshman at Harrison Central, and Maddie, a sophomore at Bowling Green.