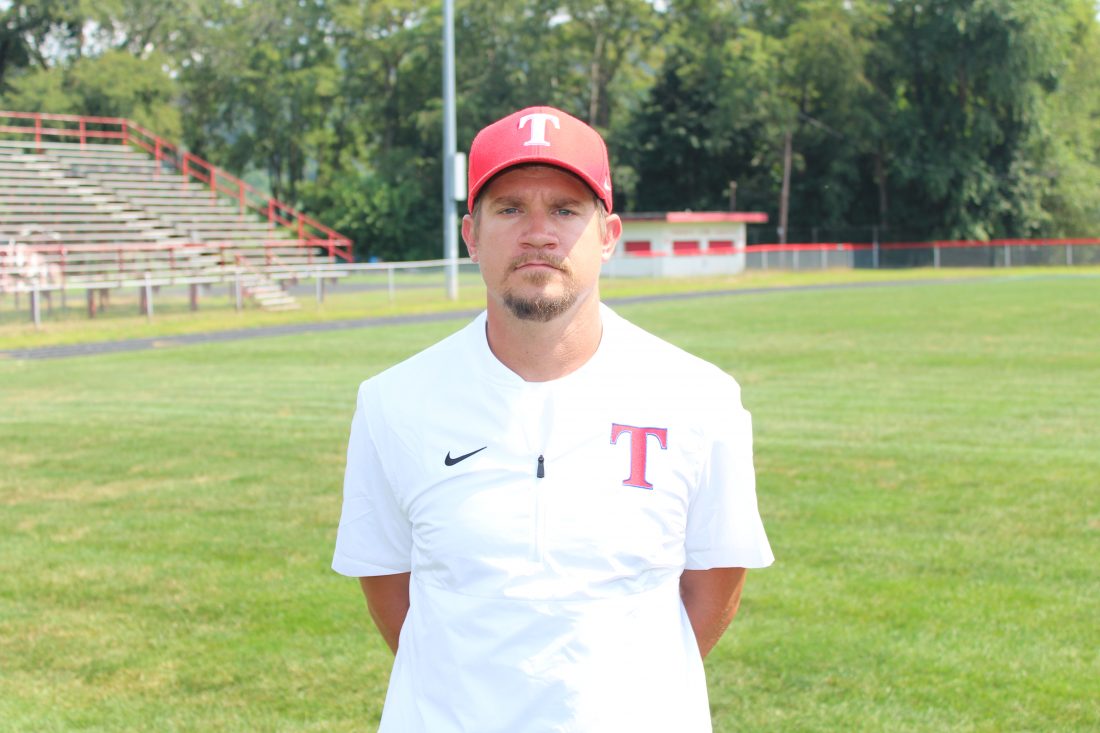 In just his second season as head coach of the Toronto football team, Josh Franke took the Red Knights to new heights.

Although the season ended in defeat, Toronto finished 8-2 in the regular season, captured the third seed in the Division VII, Region 25 playoffs and dealt with the tragedy of a sophomore player last month.

For his efforts, Franke was named the Division VII Eastern District Coach of the Year.

“Wow, really? That’s really unexpected,” Franke said with joy. “I’m honored and very grateful, but it’s the kids. I have to thank the kids for this. They really bought what we want to accomplish in Toronto.”

Franke, obviously, could not accomplish the award without his players. Five of them are honored as first-team members.

Those five begin with senior defensive back Zach Stackhouse, who also was a Defensive Player of the Year finalist. He collected 55 tackles, six interceptions, 11 deflections, three forced fumbles, two recoveries and three blocked field goals in the regular season. He also had 24 receptions for 405 yards and six scores.

“He lives, breathes, eats and sleeps football,” Franke said. “He has a bright future playing the game. He’s that kid, offensively or defensively, who is a big-time player that makes big-time plays in big-time games. When we needed something to happen, he made it happen. I am proud of the young man he’s grown into.”

Stackhouse was a favorite target of junior Caleb Leasure, who is a first-team quarterback. Leasure completed 77 of 145 passes for 1,397 yards and 17 touchdowns in nine regular-season games.

“He was a great leader and came a long way,” Franke said. “He wasn’t even sure if he wanted to play football after his freshman season. Caleb ended being our starter for five games last year and was thrown into the fire. That experience for this year, he was less than 100 yards and two touchdowns short of breaking the school record for a single season. He gives us a lot of excitement for next year.”

Also on offense, senior Garrett Dozier is a first-team running back. He compiled 984 yards on 188 carries and eight touchdowns.

“He’s one of the hardest working kids I’ve ever been around,” Franke said. “He’s constantly working out in the offseason to get ready. Hard work payed off, and he fights for every single yard he gets. By far one of the guys everybody on this team looks up to. We call him thunder and lightning. He’s hard-nosed, old-school and bullies his way to first downs.”

“He changed his position last year. We knew he would be a handful for teams to protect,” Franke said. “He’s very aggressive and quick off the ball. He’s built like a linebacker. He was in opposing teams’ backfields before they realize. I hate to see him go. He’ll be hard to replace.”

The final Red Knight on the first team is senior linebacker Tristan Thomas. He compiled 100 tackles, 11 for a loss and six pass breakups.

“He’s another senior leader and another captain of our defense,” Franke said. “He did many hours of film study on his own. He knew every adjustment on the field. This was his second year he’s called this defense. He’ll be a tough one to replace. It’s a big hole to fill.”

For his and the Crusaders’ efforts, three were named to the Division VII Eastern District first team.

The first is senior running back Jeffrey Dawson, who led the offense all season long. Dawson had 169 carries for 863 yards and 14 touchdowns.

“He is a very talented hard runner that knows how to get north to south when he needs to,” Agresta said. “He was one of the more dependable backs I’ve ever worked with and it was a pleasure to work with him.”

Senior linebacker Anthony Simmons, Jr. paced the defense with 134 tackles, seven for a loss and a pass breakup. Those numbers were good enough for a first-team nod.

“He’s a very physical football player and was born to play linebacker,” Agresta said. “He’ll be really missed on defense. Those are big shoes to fill.”

The final first-team member for the Crusaders is senior defensive back Anthony LeFever, who also was the team’s starting quarterback late in the season after Anthony Gorman was lost with a torn ACL. LeFever recorded 65 tackles and seven interceptions.

“He just had a knack for getting to the football in the secondary,” Agresta said. “Several times the defense needed to step, and he was the person to do that. Definitely a lot was on his shoulders late in the season.”

“What I’ve come to appreciate about him is there were roles people had to fill, and he never complained about filling them,” Agresta said. “He had a team menatlity the whole time. He did anything he could do, even if it meant sacrificing a personal achievement.”