Oak Glen preps for next round against Poca Dots, record-breaking rusher 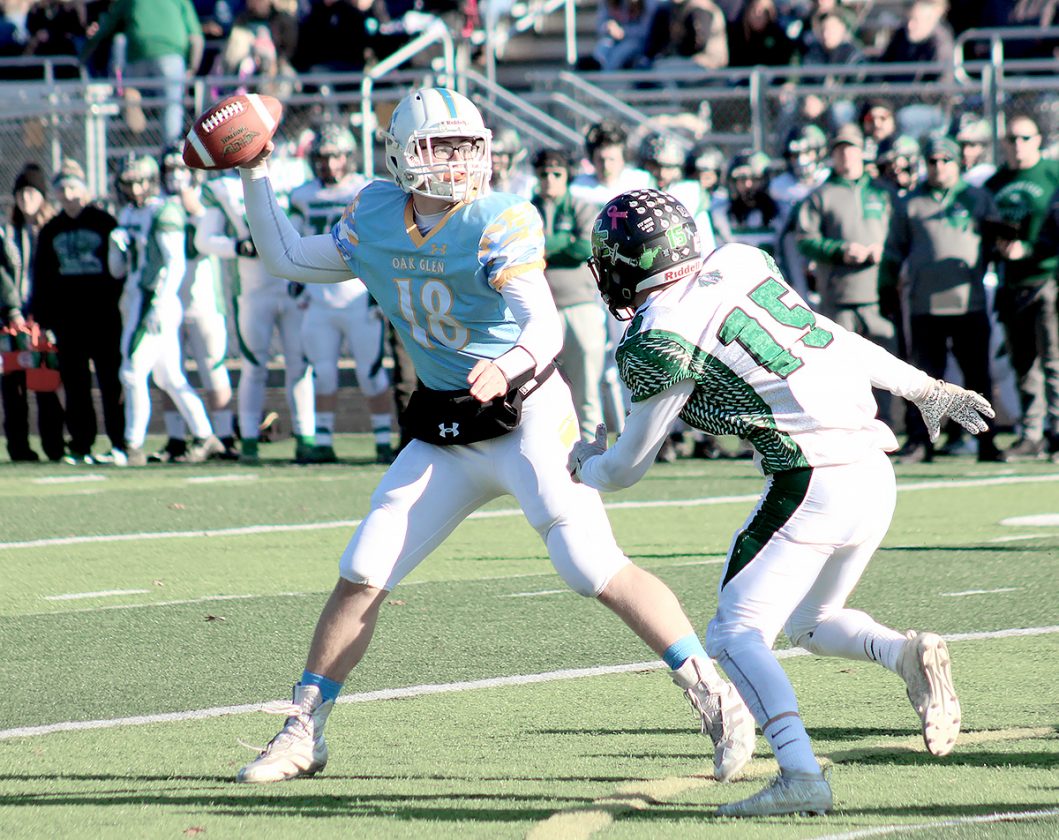 POCA — Something will have to give on Saturday afternoon inside O.O. White Stadium.

Oak Glen, the No. 6 seed in Class AA, has had one of the best defenses in the Herald-Star/Daily Times coverage area all season, but it will face its toughest challenge yet when it squares off with No 3 seed Poca and Ethan Payne, the Dots’ record-setting senior tailback.

Payne, a 6-foot, 215-pound back, enters the meeting with 2,661 yards, 51 total touchdowns and having set the state record for points scored in a regular season. He has led the Dots to their first undefeated season since 1978 and is just three shy of the record for touchdowns in a season.

Meanwhile, the Oak Glen defense that will be trying to stop him — something 11 teams have failed to do so far this season — enters the game allowing 10.55 points and 81.45 rushing yards per game this season.

“We have to try to slow down his momentum by getting hits on him before he can get a full head of steam,” Oak Glen head coach Ted Arneault said of Payne. “The kid is especially dangerous when he gets a full head of steam and is running full-speed. He has nice size at 215-220 pounds, and he really flies. He is tough to bring down. Absolutely, tackling in space and keeping him from getting to the second level is going to be key. He is absolutely deadly when he gets to the second level.

“I think that our team speed on defense is a strength, and hopefully we can use that speed inside the box to keep him from running free.”

The Dots’ offense is not just limited to Payne, though, as it can throw the ball when it needs to, as well. In the team’s 42-27 win over North Marion in its playoff opener, Poca quarterback Jay Cook threw for 140 yards and rushed for a score.

“They are definitely a run-first team. Their strong run game sets up play-action. They like to use that to force you to be more honest in defending the run.”

On the flip side, the Golden Bears have playmakers of their own, averaging 434 yards and 44.64 points per game. That offense will be clashing with a stout Poca defense, which allows 12.36 points per game.

“Offensively, we have to protect the football,” Arneault said. “They are a 4-3 team, very similar to East Liverpool in the way that they play defense. They are a bend, don’t break team. They don’t give you much. You have to play a little bit methodical against them. The way they play defense, we have to play mistake-free football. They force you to earn everything. You have to play methodical against them — they don’t like to give up the big plays.

“If you can’t be patient and be efficient with the football, and you try to be impatient — they are just not going to give up the big plays — you will end up going three-and-out pretty quickly against them. Many teams have done so, and that is one of the main reasons why Poca’s defense has been so successful.”

Those playmakers for the Golden Bears are led by Hunter Patterson, who has 1,054 rushing yards and 706 receiving, with a combined 25 scores. Gage Patterson has 583 receiving yards and nine touchdowns, while Zach Taylor, who did not play against Wyoming East on Saturday, has 556 yards and four scores.

Delivering passes to them all season has been junior quarterback Nick Chaney, with 1,690 pass yards and 20 touchdowns to just five interceptions. Adding a different element to the run game is Paxton Shuman, who has a chance to give the Golden Bears a second 1,000-yard rusher, sitting at 904 yards and 14 six-pointers.

Area fans might remember Poca from last season, as Weir High went into Poca and defeated the Dots, 41-14, in the opening round of the playoffs. Payne was dealing with an injury in that game and was far from 100 percent, being held to just 30 yards on 11 carries. The early exit may have given Poca something to prove this time around.

“I think they are hungry, and I think they have used that playoff game against Weir High as a motivator to come out and improve this year,” Arneault said. “This is their first undefeated season since 1978. They are definitely on an upswing and are pretty talented.”

The trip to Poca is about 230 miles and four hours for Oak Glen. Arneault thinks a couple of trips late in the season have helped his team prepare for the trek.

“We’re going to leave Friday, we’ll stop in Ripley to eat, check into a hotel in Charleston, and we’re going to do a walk through at West Virginia State University,” he said. “We’ll get up the next day, get some breakfast, go over some film and head over to Poca.

“I think the trip to Lincoln County, which is right nearby, was definitely useful. It got the kids in the mindset of knowing what to expect on these travel trips and the strain it takes on the body and what it takes to stay focused.”

Arneault felt that the Golden Bears’ performance in their 55-13 win over Wyoming East sent a message to the rest of the state. They’ll look to send another this Saturday.

“I think some people in the southern end of the state were criticizing our schedule. The schedule is what it is to make playoff games and win playoff games,” he said. “I think we were able to show everybody else, especially maybe some of the people and the media down state, that we play high-quality football up here. The OVAC is good football, and we were able to execute very well against a very good Wyoming East football team. To do that in front of our home crowd for the first time in our history was a big deal.”