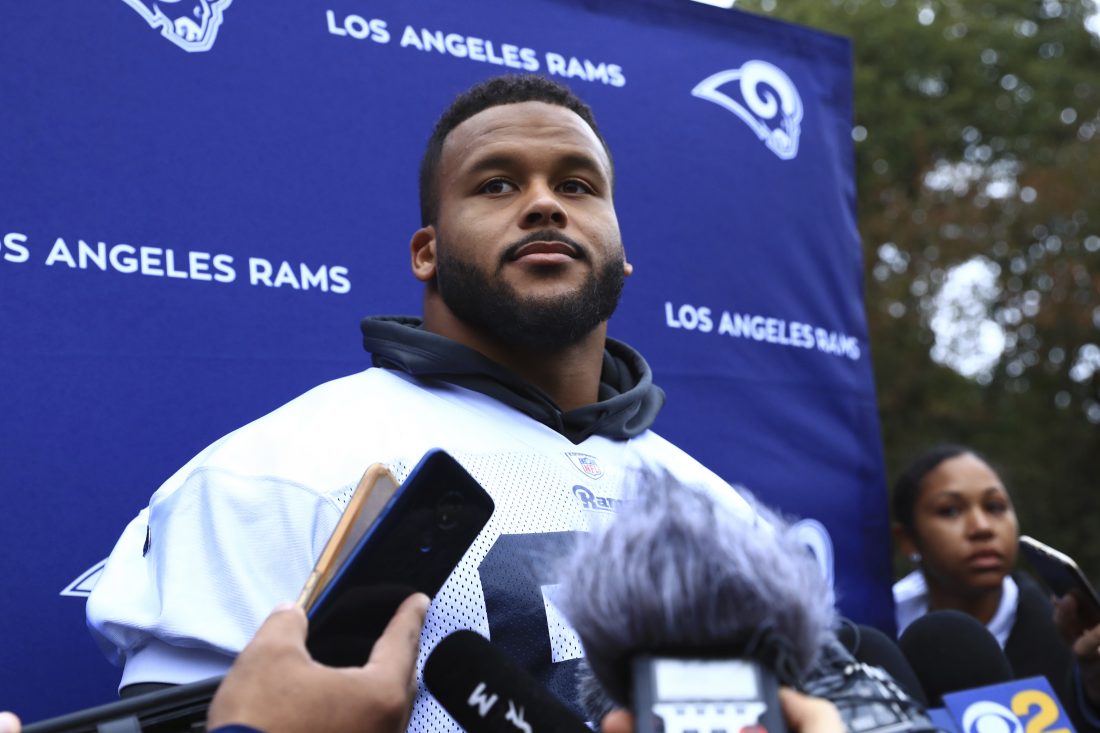 LA Rams Aaron Donald takes part in the press conference during the NFL training session at the Grove Hotel in Chandler's Cross, Watford, England, Friday, Oct. 25, 2019. The LA Rams are preparing for an NFL regular season game against the Cincinnati Bengals in London on Sunday. (AP Photo/Leila Coker)

PITTSBURGH (AP) — The trappings of success have not changed Aaron Donald. Not the millions he’s made. Not the honors he’s won. Not the endless Southern California sunshine or the potentially intoxicating celebrity that comes with making it big in Los Angeles.

Through it all — from his evolution from largely anonymous and decidedly undersized college recruit to arguably the best football player on the planet — Donald’s kept things simple. Work hard. Stay humble. Remember where you came from. All part of a mindset that’s kept the Rams’ star tethered to Pittsburgh even as his innate drive and unmistakable talent has propelled him to heights he could hardly have imagined while growing up in the eastern suburbs.

The understated 28-year-old doesn’t have an explanation as to why he hasn’t been lured west permanently. He’s not sure he needs one. Asked if his subdued personality is a reflection of the blue-collar ethos that’s long defined the city where he grew up, Donald shrugged.

“I don’t know,” he said. “I guess you could say that, but that’s just more my family. My parents raised me that way.”

A way that will be on full display on Sunday when the Rams (5-3) walk on to Heinz Field to face the Steelers (4-4) in what will be equal parts business trip and homecoming. Los Angeles needs a win to keep Seattle and San Francisco within earshot in the supremely competitive NFC West. Pittsburgh is attempting to right its season after a 1-4 start. Donald’s presence will have a significant impact on both.

Yet there will be a moment — likely the first time Donald’s familiar No. 99 makes his first play — when his name will reverberate over the public address system and the stakes will slip away. In that moment, the three-star prospect from Penn Hills considered too small at 6-foot-1 and 284 pounds to ever make it to the NFL will have come full circle.

“It’s going to be cool,” Donald said. “You know, I’m back to Heinz Field, where I played college at, and my team I grew up watching and rooting for, to go out there and play in my hometown, it’s definitely going to be a good feeling.”

A feeling that will almost certainly be returned in kind, a way of acknowledging Donald’s deep commitment to his hometown. He’s established the “AD 99 Solutions Foundation “ earlier this year, whose goal is to “change the trajectory of Pittsburgh’s underprivileged youth by providing the necessary resources needed in a free, safe environment so they may excel athletically, academically, and socially.” The foundation offers life skills training, academic support and mentoring opportunities.

“Trying to do our thing, using our platform to help others is a big thing,” Donald said.

Last spring he awarded Pitt, where he won every major award for college defensive lineman during his senior season in 2013, a seven-figure donation last spring to help renovate a portion of the practice facility the program shares with the Steelers.

It’s not unusual for the namesake of what is now called the Aaron Donald Football Performance Center to pop in during the offseason — or even during a Rams’ bye week, as he did earlier this month — to fit in a workout. It’s also not unusual for current members of the Panthers to join in, well at least when their jaws get off the floor.

“When I first saw him, I was like star-struck,” said Pitt sophomore defensive tackle Jaylen Twyman, who asked to wear the same No. 97 that Donald sported for four years from 2010-13. The two connected through Panther defensive back Paris Ford, and soon enough Twyman found himself training with Donald.

Well, “with” might be stretching it. Twyman learned what Donald’s teammates have known for years. You don’t train with Donald so much as you desperately and futilely try to keep up.

“It’s a little dangerous,” Twyman said. “I’m a Tesla, he’s like that Lamborghini.”

The Panthers aren’t the only one who takes notice when Donald walks into the building. The Steelers notice too, pointing out Donald’s dedication to newcomers to offer proof of what is possible.

“He can be used as an example of when we are talking to our young players,” Pittsburgh offensive coordinator Randy Fichtner said. “‘That’s what you do. That’s how you train. That’s how you work.’ He exemplifies all that.”

“That gives a lot of undersized guys a lot of hope,” said Steelers outside linebacker Ola Adeniyi, who at 6-1 and 248 pounds spent the week trying to mimic Donald on the scout team. “Because we get told, ‘He can’t do it. He’s too small.’ But (Donald) is somebody that you look like and he’s doing that at a beast of a level. That gives you confidence to do your best and hopefully it works out for you.”