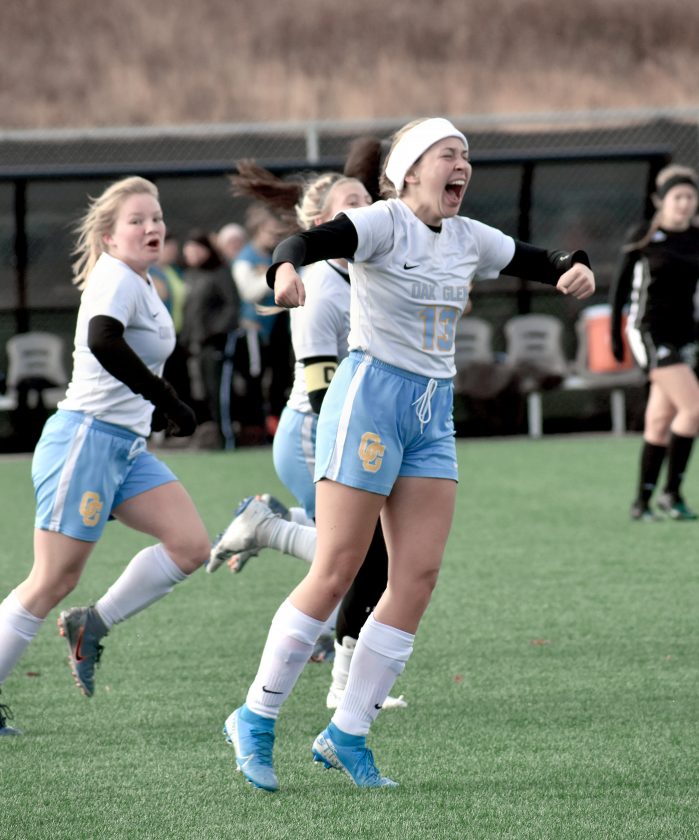 BECKLEY – Tournament time is a special for many reasons, but sometimes it can be as simple as someone unexpected who steps up and plays the hero.

That is exactly what Oak Glen got in the form of Phoebe Molish.

Molish took advantage of a scrum in front of the net and scored the lone goal of Friday’s Class AA/A girls soccer semifinal contest against Winfield at Carter Field, sending the Golden Bears into today’s state championship game for the first time in school history.

“We understand we are going to have to bring a different style when we get down here,” Oak Glen coach Ryan Wells said. “I thought we did that. It has been one step further every year the last three years. You have to prove yourself, especially to big soccer schools in the state and I think (Friday) was our first step toward doing that.”

Oak Glen (18-2-2) advances to today’s championship game at 9:30 a.m. against Charleston Catholic. The Irish defeated Bridgeport, 4-1, in the other semifinal.

Winfield (18-6-1) controlled the possession throughout the contest, but couldn’t seem to put one in the net.

Oak Glen didn’t have many chances. It made the one it did get count.

After a scoreless first half, Winfield was on the attack as soon as the second half whistle blew and barely let Oak Glen cross midfield. But a counter attack allowed the Golden Bears one shot.

Brooklyn Loveland has made a habit of perfect crosses and this one into the box drew out Winfield goalie Christin Walls.

The clear attempt was knocked away and right to Molish, who chipped it into the open net to give Oak Glen a 1-0 lead with 14:50 remaining.

“I don’t really know what happened,” a delighted Molish said. “I saw the ball fly past the defender and Jules was there, I got all mixed up and couldn’t find the ball. All I did was turn around and kick it toward the net and it actually did go in.”

On a team filled with superstar goal scorers such as Reece Enochs (48), Abigail Myers (33) and Jori Alexander (15), it was a girl who had one goal coming into Friday’s game that provided the biggest moment.

Wells got emotional talking about his sophomore.

“Bringing this little goofball off the bench was huge for us,” Wells said. “I told her she was going to get some minutes. We know when Phoebe plays midfield, she can get a little out of position sometimes and press high and (Friday) that was a good thing.

“She did a really good job. She was what we needed. Phoebe is a burst of energy. We needed to win 50-50 balls and she started winning them in the back, so we pushed her up high because we saw the aggressiveness.

“Any time you can see a kid have that type of moment; it means everything. She busts her ass. Her playing time diminished throughout the year, but she sticks it out. She has come a long way.”

Oak Glen was outshot, 9-4. Goalkeeper Alexa Andrews had an eventful day trying to stop the high-powered Generals offense, but was there to knock away everything.

She almost let one slide in during the first half, but was rock solid after that. She was able to keep her composure as Winfield kept attacking, including a loose ball on a corner kick that somehow didn’t cross the line, as well as an Ava Hall direct kick just outside the box that hit off the crossbar.

“The team around keeps me calm because I do freak out at times,” Andrews said. “All I know is that I had to keep the ball out. I think I will be more calm for (today).”

“I thought the adjustments after we talked at halftime were huge,” Wells said. “We were able to put more pressure high. We started with that 1-4-4-4-1 and then went to a 4-4-2 and talked about counters where we could hurt them.

“It made a huge difference. It was the girls figuring things out through that first half. We have been able to do it all year. The girls have learned through the course of the year to just talk. Input we got from them at halftime, we listened and it paid off.”

While the Oak Glen side was in jubilation, the cruelty of soccer where a team can control the game and lose was evident.

“We had probably our worst fundamentally sound game and weren’t playing our possession like we know how to do,” she said. “I think my girls had heart and wanted to win, but you have to have everyone. (Oak Glen) wanted it. I can’t say were as good as us because they weren’t, but that is the beauty of soccer and the terribleness of soccer.

“All it takes is one goal to go in. They were on our side of the field maybe three times (in the second half), but made it count.”