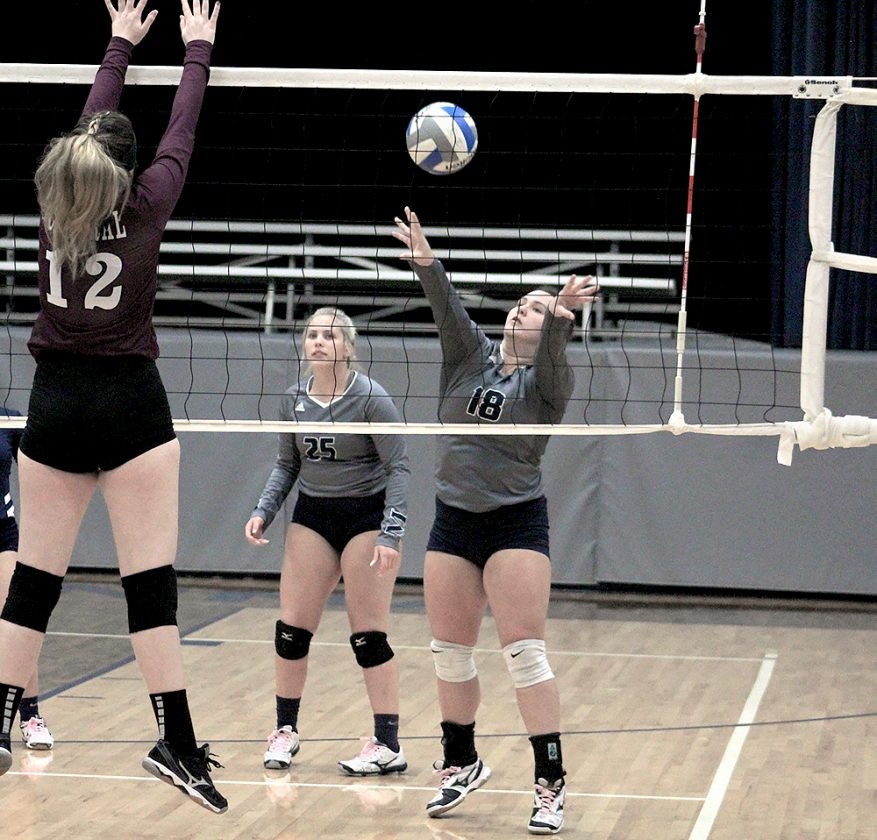 WEIRTON — The Madonna volleyball team came out swinging on its home court Wednesday relaxed, loose, aggressive and having fun.

With the Blue Dons needing only three points for a first-set victory, Wheeling Central called a timeout. From that point on, the Maroon Knights stole all of Madonna’s momentum and firepower.

“Relax. Just relax, and they decided to breathe a little bit,” Wheeling Central first-year head coach Delaney Denniston said regarding what she told her team during the timeout. “I think they got a little nervous, but they just needed to relax. I didn’t really yell at them because I don’t think it helps. They just had to get out of their own heads.”

Despite the outcome, both teams advance to the regional tournament on Saturday.

“That (first set) set the tone for the entire match,” Denniston said. “They really pushed through it and knew it was going to be a tough game. They knew Madonna was home and was not coming here to lose.”

The Blue Dons (8-15) led 22-18 in the first set when the Knights (14-14) took a much-needed timeout. Madonna then took a timeout of its own after two-straight points from Wheeling Central.

All of a sudden, the Knights were ahead, 24-23. The last point was a back-and-forth battle, before Nicole Reasbeck softly dropped the ball that deflected off two Blue Dons and out of bounds.

“We have to learn how to finish because we didn’t finish,” Madonna head coach Pat Kush said. “Then, there were too many mental mistakes and we weren’t aggressive at the net. The first set took a lot out of us. When we lost it, a lot of air went out of the building.

“The girls are always loose, but they were playing not to make mistakes. You can’t do that. But, we don’t quit until the final point. I’ll give my girls that.”

Wheeling Central carried the momentum over to the second set and took a quick 5-0 advantage. Madonna then scored seven-straight points, and it became another back-and-forth affair.

However, the Knights slowly chipped away, led 18-12 when Madonna used a timeout and never let their guard down.

In the third set, the Knights played loose and aggressive, while the Blue Dons were the opposite, playing more on the defensive end rather than on the offensive. Similar to the second set, Wheeling Central pulled away after it was 12-12 to claim the championship. It ended on a 7-1 surge after leading 18-15.

“I have to give Madonna credit. They played tough back and forth the entire night,” Denniston said. “They are a great team. They definitely picked up on our weaknesses and were more competitive this time around.”

Tristen White led the Knights with 10 kills and three blocks. Reasbeck had 14 kills and five digs. Maddie Lemasters tallied eight kills and one block, while Peyton Knight compiled 28 assists, a pair of kills and five aces. Overall, they had 33 kills compared to Madonna’s eight.

“This is pretty much how they played us all year,” Kush said. “We always go neck and neck. They’re a good team, and we played right along with them. We just have to learn how to finish.”

For the Blue Dons, Marianna Martinez had four kills and four blocks. Maddie Daugherty, who was struck with the ball multiple times in the face, finished with 16 digs. Carly Dowiak compiled three blocks, three digs and one kill. Anna Backel added 13 digs.

“I told the girls we’re one win away from the state tournament. We can do it,” Kush said. “We can play with anybody. We have to be aggressive at the net, play not to lose and we’ll be fine. One of these days, we’ll start getting the breaks.”

“We’re just going to go in and hope for the best,” Denniston said. “We know it’s going to be either Paden City or Ritchie County. We’re excited to go and need to play with the same intensity we had tonight.”