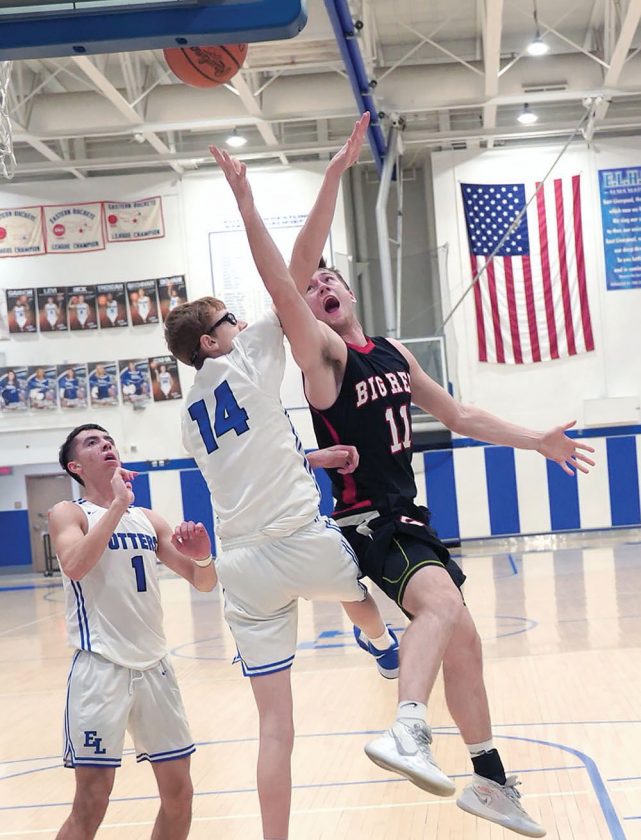 GOING UP — Steubenville’s Calvin Bickerstaff goes up for a layup attempt in front of East Liverpool’s Cole Dailey and Brennan O’Hara during Friday’s game at the Potter Fieldhouse. - Chris Rambo

EAST LIVERPOOL — Tresean Jackson’s offense put East Liverpool in position to win Friday against Steubenville. A stretch of stellar defense by the Potters took care of the rest as they pulled away late to down Big Red 63-55 on an exciting night at Potter Fieldhouse.

Playing nearly the entire fourth quarter with four fouls, Jackson finished with 34 points, including a pair of threes to put his team ahead to stay. With 1:15 left and the Potters nursing a three-point lead, Nick Woodyard sent a surge throughout the gym with blocks on back-to-back possessions to seal the victory and avenge an 80-76 loss to Big Red last month.

“The final minute was the craziest time I’ve had on a basketball court, Woodyard said. “Our team was fired up and everyone was flying around. We really wanted this one to get revenge. I’ll remember that last minute forever.”

The Potters improve to 11-3 overall and add a nice win to their resume as January starts to wind down. Steubenville drops to 8-6

“We really needed this one to get over the hump against them,” East Liverpool coach Nate Conley said. “I think its been about five years since we beat them. They can match our speed and athleticism and they beat us up down low in the first half. But, man, we played a great fourth quarter defensively and Tresean came up with some big shots down the stretch.”

With 56.3 seconds left in the third quarter, and the Potters leading 46-45, Jackson went to the bench with his fourth foul. However, a quick four points from Big Red caused Conley to quickly re-insert him with 6:30 left in the game.

“During those couple minutes on the bench he must have asked to go back in about 18,000 times,” Conley said. “We decided if we got down by more than two, he was going back in and he played smart the rest of the way. This was a good learning experience for him.”

“It was tough playing with four fouls, I was thinking about the last game when I fouled out and I didn’t want it to happen again,” Jackson said.

It didn’t take Jackson long to find his groove.

With 4:46 left, he drilled a deep three to tie the game at 51. After a Big Red turnover, Jackson rattled home another one to put the Potters up 54-51.

“Before those two threes, I had two bad turnovers,” Jackson said. “It was crunch time and I needed to step up. The coaches encouraged me to shoot and that was that.”

Gannon Irvine drained both ends of a one-an-one to put the Potters up 58-55 with 1:15 left. On the ensuing Brennan O’Hara hounded Trillyun Jones into an ill-advised three, but Big Red came up with the rebound. Woodyard erased the next attempt with a block, however, and O’Hara kicked the ball downcourt to an open Devin Toothman for a layup. Woodyard then blew up the next Big Red possession and found Cole Dailey for another transition layup to give the Potters an all-but-insurmountable 62-55 lead with 26 seconds left.

Big Red was held scoreless in the last three minutes.

“I’ll have to go back and watch Nick on film, that was one of the most exciting things I’ve seen,” Conley said. “He told me he loves football, but that was about as pumped up as he’s been playing a sport.”

Steubenville forwards Calvin Bickerstaff and Quinn McCoy were a load inside for the Potters most of the night. Bickerstaff had 18 points and seven rebounds, while McCoy had eight points and nine rebounds. Both of them helped Big Red slowly chip away at an early 22-12 lead for the Potters.

“Mentally we didn’t do the things we were supposed to do in the last two minutes,” Steubenville coach Mike Haney said. “We were down one point and guys started pressing. We rushed too many possessions.”

Big Red is at Indian Creek Tuesday. East Liverpool is at Salem Tuesday.

¯ East Liverpool won the jv game 55-43. Jerone Deal had 13 points for the Potters. Isaiah Wickham had 10 points for Steubenville.