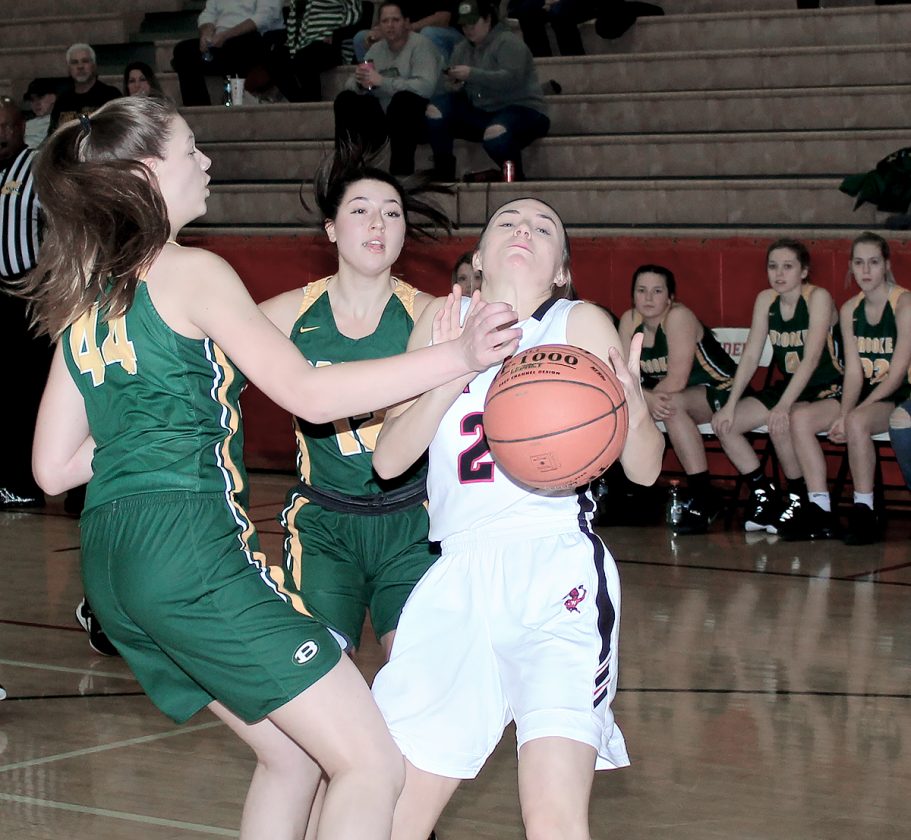 WEIRTON — The Weir High girls were coasting along with a solid 27-point lead with a little less than three minutes left in the third quarter Thursday when, suddenly, Brooke caught fire.

Coach Amy Serevicz’s club got to within seven points in the fourth quarter before bowing out, 59-45.

The Bruins went on a 24-4 run from the 2:06 mark of the third period to 3:46 left in the game. Freshman Angelina Lippoli started the run with two short jumpers, and she finished it with a layup after a Brooke steal.

“Up until Angelina started that run, we had only scored two points in the second half,” Serevicz said, whose club now is 1-13. “Our defense and offensive effort was there, but our shooting wasn’t. We didn’t have as many turnovers as we had in the last game (17), and we had a lot of girls scoring. We missed a lot of layups and short shots early in the game, and that’s really been hurting us. The shots for the most part are pretty good, but they’re just not going down.”

Weir High’s 1,000-point scorer, Sophia Mikula, cashed in a foul shot, then made a steal at mid-court and fed junior Bella Aperfine a pass for a layup to cool off the Brooke onslaught. That put Weir High ahead by 10 at 50-40 with 2:24 left in the game, and the Red Riders outscored Brooke, 9-5, the rest of the way.

“When you get a big lead like that, you can’t let a team score like that without exchanging baskets with them,” Red Rider coach Rick Stead said. “That’s what happened

With the win, the Red Riders, who beat Brooke 49-30 on Dec. 12, improved their record at 6-8. Mikula got a good start on her second thousand with a game-high 26 points. Aperfine, who finished with 11 points, made three foul shots, and her sister, Sophia, made four going down the stretch to hold off the Bruins. Sophia Aperfine finished with 13 points. Junior post player Taylor Nutter grabbed 11 rebounds for the Riders.

“We have trouble being consistent,” Stead said. “We have a bunch of good athletes that want to run. As long as Brooke played us with a man defense, we were OK. But, when they switched to a zone in the fourth quarter, we had difficulties slowing it down and nursing our big lead.

“We got a little sloppy and made some turnovers and made some bad decisions on shots in the fourth quarter. We got a timeout with a little more than two minutes left and, after that, we got settled down and ran our offense better against that zone. We’ve played a difficult schedule, so we should be able to handle situations like that. But, I’ll tell you I will take this group of girls over anybody. They’re experienced, smart, practice hard and work hard in the games. I wasn’t surprised that they settled down going down the stretch and extended the lead back out.”

The Red Riders raced out to a 16-8 first-quarter lead and, by halftime, were ahead, 31-14. The Riders still had a comfortable 45-27 lead going into the fourth quarter.

“We dug ourselves a big hole in the first half,” Serevicz said. “This is one of our big rival games, and I think the girls were a little bit tight early and that caused them to miss some of those easy shots.”

≤ Arca’s twin sister, Ashley, who started for Brooke as a freshman and sophomore but has missed the past half season and all of her junior year with knee injuries, returned to action for the second time this year. She played against Steubenville on Jan. 6 and returned Thursday night to play a little more than half of the game, scoring four points with two steals.

Weir High: Travels to Madonna on Thursday for the city championship.