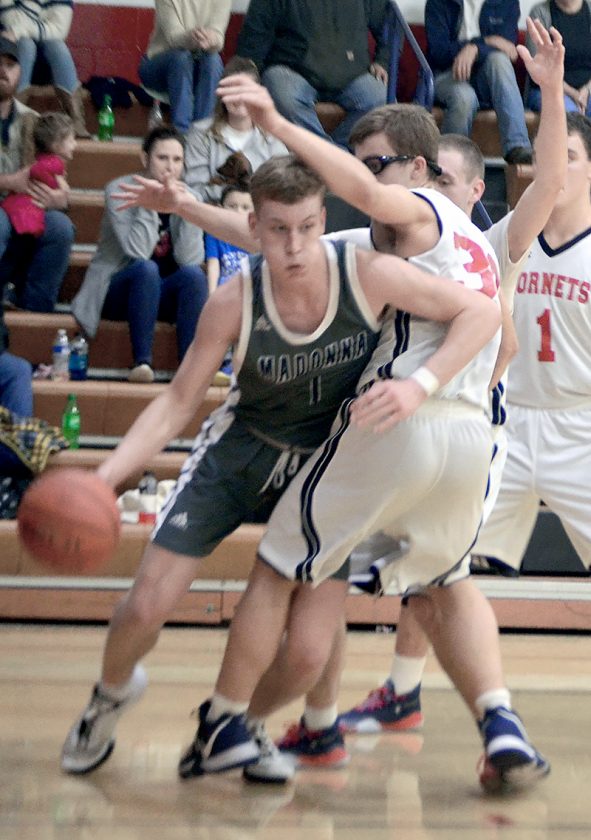 MANEUVERING — Madonna’s Brennan Secrist works around a Hundred defender to the hoop during an OVAC Class 1A semifinal on Tuesday. -Bruce Crawford

HUNDRED — Madonna made 9 of 19 free throws in the fourth period and held off a Hornet comeback to punch its ticket to the OVAC Class 1A championship game Saturday with a hard-fought 63-60 victory over Hundred on Tuesday inside a packed Hornets Nest.

The Blue Dons will meet Frontier in the title game. Frontier stopped Cameron 54-47 in the other Class 1A semifinal.

To open the game, the Hornets struck first with a Cody Soles rebound putback, while Blue Dons’ big man Brennan Secrist followed with one of his own. The Hornets’ Eli Geho tickled the twine from beyond the arc. However, each time the Hornets would score, Madonna would answer, and this time Anthony Sessi match the triple with one of his own.

Aaron Stephens quickly followed with a nifty give-and-go, ending with a nice short jumper over the 6-foot-5 Secrist, but Madonna topped that with a Lucky Pulice deuce and one to give the visitors their first lead. But, just as quickly, Santino Arlia swished a bonus bomb, while Evan Boniti tacked on a deuce after a steal at the 3:13 mark to forge in front 13-7.

Secrist took a pass from Arlia in the corner and went untouched for a nice 10-0 run. Soles stopped the bleeding with a nice stop and pop at the two-minute mark. But, just as quick, Secrist answered with his third bucket, while the Hornet’s Martin Baker swished a triple to end period one with the Dons on top, 18-12.

Secrist opened the second period with a 2-pointer, but Soles scored two-straight baskets. Pulice then tossed the in-bound pass off a Hundred defender and put it back in.

Logan Norris took over the last four minutes for the Hornets, scoring 13 points, with the later bucket gave the Hornets back the lead at 31-29. However, Pulice swished a pair of charity tosses and a deuce to give Madonna a 33-31 lead at the break.

Soles and Norris opened the second-half scoring with a pair of 2-pointers, while Secrist’s nifty drive to the bucket from the corner tallied the Blue Dons’ first points. Hundred’s Aaron Stephens gave the lead back to the home side, and Secrist was injured on the play and was sidelined the rest of the period.

Boniti swished a bucket and one, while Bobby Hostutler sank his first bucket for Hundred. Hostutler added a free throw and Soles a triple, but Madonna would outscore the hosts, 12-4, to grab a 50-43 lead heading into the fourth.

Madonna pushed its advantage to 57-43, before Soles swished a pair of free throws for the Hornets’ first points with 3:28 left in the regulation. Baker followed with his second triple of the night to pull the Hornets to 48-57.

From that point on, Madonna would go to the free-throw line 14 more times, sinking only five, while the never-say-die Hornets got 2-point baskets from Norris and Baker. Soles and Norris each swished long bonus bombs. Norris canned a 3-pointer at the buzzer.

“We just ran out of time,” Hundred head coach Virgil Wilkins said. “We had a scoring drought midway through the third and the start of the fourth, and when a team shoots three times as many as you shoot, you usually lose the game.

“We had to foul in the fourth when we were down double digits, but we got close, but close isn’t good enough in the big games. I’m proud of our players, and we just lost by 3-points to a pretty good Madonna after being down double-digits late in the game.”

“That, my friend, is the best Hundred team I have ever seen in my 24 years. They never quit and took us down to the wire,” Madonna head coach George Vargo said. “You win games and lose games at the free-throw line.”

Soles led all scorers with 22 points, while Norris followed with 20 points. Soles, Norris and Baker each knocked down two baskets from beyond the arc, with Baker adding eight points and Soles hauling down eight rebounds and two blocked shots. 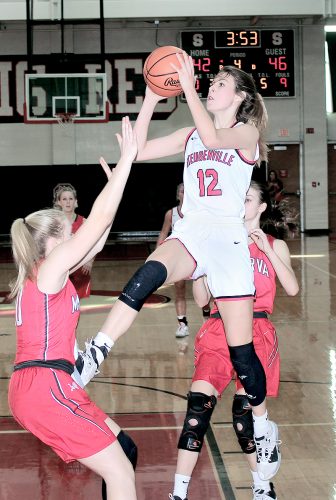 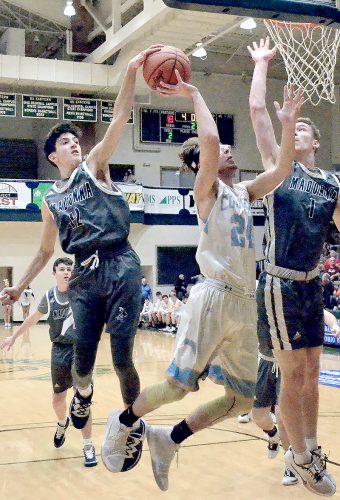