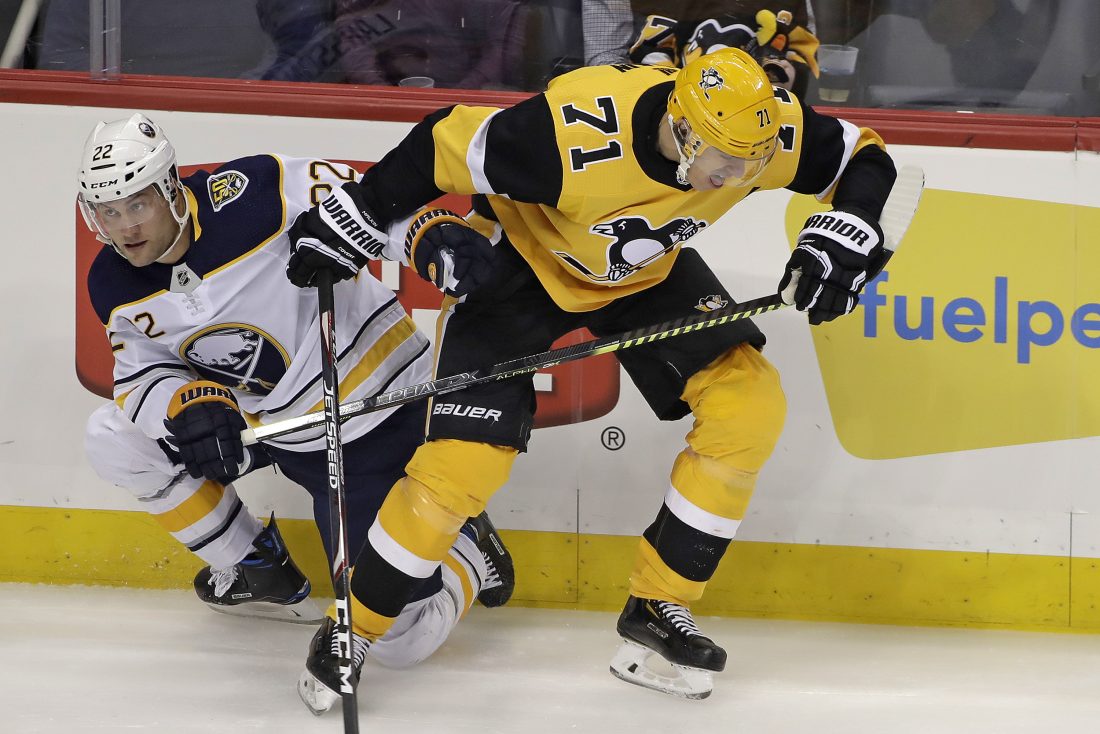 PITTSBURGH (AP) — Plenty of work remains for the Buffalo Sabres as they try to claw their way into the playoff picture. Streaking past the suddenly listless Pittsburgh Penguins is a pretty good way to start.

Jack Eichel scored twice and Sabres jumped on the Penguins early in a 5-2 victory on Saturday, just their second regulation win over Pittsburgh in the last seven years. Eichel, Zemgus Girgensons and Sam Reinhart all beat Tristan Jarry during an early three-goal outburst and Connor Hutton turned away 41 shots as Buffalo won for the fourth time in five games.

“I thought we played really desperate (and) we got rewarded,” said Eichel after pushing his season goal total to 35. “That’s a really good team. It’s a good way to play there. We smothered them, we back-pressured. We played a good team game on the road.”

Jeff Skinner picked up his first goal since early December with a pretty deflection in the third period and Hutton did the rest, staying calm as Pittsburgh turned up the pressure following its sluggish start.

“I think they got some chances,” Hutton said. “They have a pretty good hockey team over there. I think the difference today was penalty kill and power play. We held the edge there and it’s the difference in the game.”

The Sabres went 2 for 3 with the man advantage — both scores coming off Eichel’s stick — and killed both penalties they faced. Buffalo remains near the bottom of the Eastern Conference with just a quarter of the regular season remaining but the Sabres are a promising 6-3-1 in their last 10 games.

Making the playoffs isn’t much of a concern for the Penguins, who haven’t missed the postseason since 2006. A 14th consecutive trip is all but assured but Pittsburgh looked sluggish in the opening minutes and never recovered. After moving into the top spot in the Metropolitan Division for the first time all season with a win over Toronto on Tuesday, the Penguins have dropped two straight, being outscored 9-2 in the process.

Evgeni Malkin picked up his 19th and 20th goals for Pittsburgh and Jarry finished with 21 saves but coach Mike Sullivan admits he’s growing concerned about his team’s play, particularly in the defensive end.

“I think we’re saying the right things, but our actions have to follow our words,” Sullivan said. “We come out in the first period, we play a high-risk game. You can’t win in this league playing a high-risk game. And we were high risk tonight.”

Girgensons needed all of 14 seconds to give Buffalo the lead. The Sabres won the opening faceoff and worked the puck into the Pittsburgh zone. Kyle Okposo intercepted a Malkin chip behind the Penguins’ net and fed it in front to a wide open Girgensons, who had little trouble beating a surprised Jarry.

Reinhart doubled Buffalo’s advantage 6:48 into the first, deflecting an attempted stretch pass by Pittsburgh’s Kris Letang and then chasing down the puck in the Penguins’ zone for an impromptu breakaway. Reinhart roofed a shot to Jarry’s short side and Pittsburgh was reeling.

Eichel finished off the early flurry with his 34th of the season, a power-play goal 10:51 into the first in which the three-time All-Star was all alone in the left circle. He collected a pass from Rasmus Ristolainen and whipped a wrist show over Jarry’s right shoulder to make it 3-0.

A frustrated Sullivan called timeout in an effort to get his team to collect itself, but the Penguins never really threatened to get back in the game. Malkin brought Pittsburgh within 3-1 just past the midway point of the second period. But Hutton withstood a late push in the second to preserve the two-goal advantage. After Skinner ended a 22-game goal drought in the third period, the Sabres were on their way to only their second regulation win over the Penguins since Oct. 5, 2013.

“We not play hard defense,” Malkin said. “It’s fast team. They fight to playoffs and we should understand, we need to play physical.”

Suspended Buffalo defenseman Zach Bogosian’s five-year tenure with the Sabres is over. Bogosian cleared waivers on Saturday, allowing Buffalo to terminate his contract and make him a free agent. The 29-year-old needs to sign with a team by Monday’s trade deadline to be eligible to play in the postseason. … Buffalo scratched D John Gilmour and C Evan Rodrigues. Pittsburgh scratched D Juuso Riikola and Fs Dominik Kahun and Zach Aston-Reese.

Penguins: Will try to beat the Capitals during a Sunday road matinee for the second time this month. Pittsburgh edged Washington 4-3 on Feb. 2.