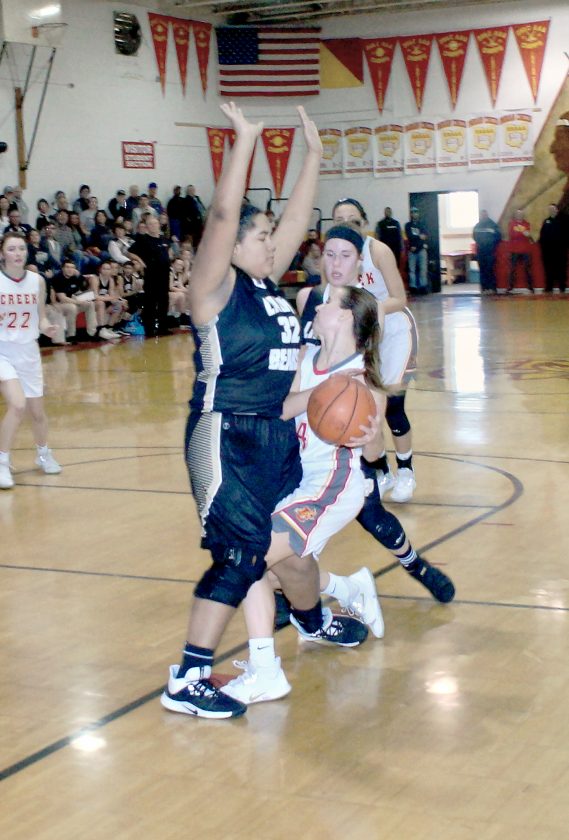 The play was delivered by junior guard Kelsey Hartsock, who swished a 3-pointer as time was expiring to give the Black Bears a thrilling 53-50 victory over the home standing Redskins.

“That was an amazing high school basketball game for sure,” Eft said. “That’s why we coach and that’s why we play — for games like this. It was an unbelievable atmosphere.

“We just came up one play short. They made a play at the end and we didn’t. That’s the way it goes in basketball. Unfortunately, we came out on the wrong end — they just made one more play.”

The second-seeded Redskins, who finish their season with a sparkling 22-2 mark, took a five point lead (48-43) with less than two minutes play after junior standout Taylor Jones drained two free throws. River View, the sixth seed, answered with a jumper by senior standout Jessica Hartsock. Emmie Brenly then netted a pair of foul shots and it was 48-47 Creek.

After a Creek turnover, River View regained possession with 14 ticks showing. A River View pass was deflected out of bounds and the Black Bears took a timeout with 3.2 seconds remaining. On the inbounds play, Jessica Hartsock got the ball to her younger sister who delivered the game winner.

“That last play was very well executed by the kids,” said River View coach Marty Bice. “Indian Creek had us on the ropes a couple of times during the game but our kids kept battling and kept battling. I thought that was the whole key to the game.

“We ended up with an opportunity in the fourth quarter to take advantage of some things. This is a great win for our kids. Indian Creek is a great ball club. They are young and have a lot of talent coming. They’re going to be tough in the future.”

Kelsey Hartsock got a layup off a steal to put River View, 16-8, up 7-6 midway through the opening quarter. Creek responded with a 7-0 run. Kiger got things going with a triple. A Clark deuce ended the spree. Creek lead 19-14 after one. Senior Ally Tweedy, who had a solid game on both ends of the floor, scored all six of her points in the period.

River View pulled to within one (19-18) early in the second thanks to a hoop by Emma Anderson. Baskets by Kiger and Jones gave the Redskins a five point cushion and they kept that advantage (29-24) heading into the halftime break.

A couple of Jones free throws put Eft’s club up 36-28 midway through the third. The Bears, however, ripped off nine-straight points (Jessica Hartsock accounted for seven on two triples and a free throw) to move in front 37-36. Creek closed the quarter with free throw makes by Makenzie Taylor and Jones.

“Our girls battled the whole game,” Eft said. “They played extremely hard the whole game. As a coach, that’s all you can ask for. Unfortunately, we could have executed better at the end and that falls on me as a coach. I have to make sure we execute better in those situations.

“My hat goes off to River View. I want to wish them the best of luck going forward.”

“Jess is our senior leader and she’s our 1,200 point scorer,” Bice said. “She hit two big shots when we were down. You lean on your seniors when you get into situations like that. I couldn’t be any prouder of her.”

The victory was the 300th of Bice’s coaching career.

“It’s one of those things, I’ve been doing this for a long time (Bice is in his 20th year of coaching),” he said. “It’s an achievement that a lot of kids worked hard for. It’s just as much the kids as it is me.”

Jones had a monster game for the Redskins. She netted 18 points and hauled down 10 rebounds. She also swatted away two River View shots. Taylor, also a junior, tallied 12 while Kiger finished with 10. Clark had a team-high four assists.

“But, this loss doesn’t take away from the season we had. We had 22 wins and that’s an unbelievable accomplishment. We also earned the OVAC Class 5A championship. We have a lot to be proud of. We just came up one play short today.”

¯ The loss ended the careers of Tweedy and Sloane Lewis.

“The underclassmen can take this and hopefully use it as motivation for next season but Ally and Sloane don’t have that opportunity,” Eft said. “I want to thank them for everything they have given to this program. They were freshmen when I came into the program as an assistant. It’s going to be strange not having them around.

“Ally have given us everything she has. She’s a four-year letter winner and a three-year starter. She has means so much to our program and been a major contributor to our success.

“Sloane — I can’t say enough about her. She is an example for a lot of young athletes because she excels in soccer and track and has won a state championship in track. She accepted her role on this basketball team. She didn’t play a ton of minutes but when she played, she gave us everything she had. I’m just real thankful for her and the effort she gave us. When you are a star in other sports, you want to be a star in every sport. Not every kid would have accepted the role she was given. I’m really proud of the season she had and I thank both seniors for everything they have given to our program.”

River View: Will meet third-seeded Maysville in the district semifinals on Wednesday.