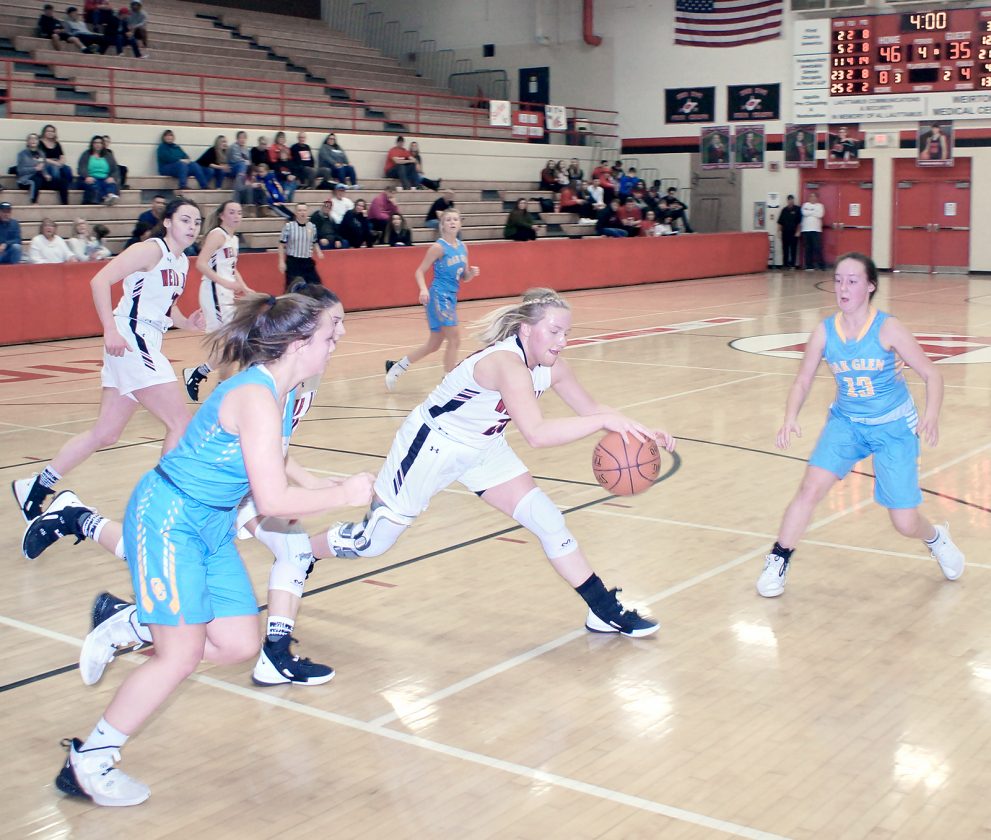 WEIRTON — The Weir High girls basketball team advanced to the semi-final round of the Region 1, Section 2 tournament Saturday afternoon with a 52-42 victory over arch rival Oak Glen in the play-in game inside the Carl R. Hamill Fieldhouse.

The win snapped a three-game losing streak for Rick Stead’s club, which will travel Tuesday to play at North Marion, the top seeded team in Region 1 and top team in West Virginia Class AA girls basketball.

The Red Riders utilized superior speed and height advantage in the paint to capture a third win over their rivals this season.

“I thought we played very well in the first half but in the second half we got away from some of the things we wanted to do,” said Stead, whose club now is 12-11. “Scott (Wiley) had his girls very well prepared and when he shifted to a man defense in the second half it kind of threw us off a little bit.”

Oak Glen outscored the Red Riders 29-24 in the second half, but were unable to keep up with Weir High’s torrid pace and went into halftime trailing 28-13.

“We tried to come back in the second half, but we just couldn’t get the ball in the hole,” Wiley said. “They just kept fast breaking us and we couldn’t get back to stop them. We could see those things on the bench, but they couldn’t see it on the floor. We tried to get back, but coach Stead’s team likes to run and we have trouble with that. They did a nice job.”

Oak Glen, which wrapped up the season with a winning record at 12-11, outscored the Riders by one point in the third period and went into the final eight minutes down 14 points at 40-26.

The closest the Bears could get in the fourth quarter was eight points when sophomore Maddie McKay knocked down a three-pointer with 16 seconds left on the clock. Weir High’s Taylor Nutter, who dominated the rebounding with 12 caroms (half of them on the offensive end) made a layup with six seconds left for the final margin.

“They are stronger than us,” Wiley admitted. “That rebound they got there at the end and put back up showed that very well. We have to get on the weights during the off season. Their bigs did a nice job. We would get set underneath the bucket and they would be right there for the rebound.

“But I’m very proud of our season. We have a winning record for the first time in a few years, so we think we’re really building something. I appreciate my two seniors, Brittney Giorgini and Alexa Andrews, but we have some young players that got some playing time this year. I hope they will take basketball serious in the off season and work hard to continue to improve.”

“We got away from what we wanted to do in the second half,” said Stead. “It likely was because of their switch to man defense in the second half, but I give our kids credit because we played down at Fairmont Senior on Thursday (a 70-45 loss) and then had to come right back here with only a one-day rest.”

¯Stead’s starting lineup had just one senior, Mikula. He went with three juniors and a freshman, Sophia Aperfine, while another freshman, Hoover, saw considerable playing time as the sixth girl.

¯ The North Marion Lady Huskies beat Weir High by nine points 61-52 at the Hamill Fieldhouse. It was the season opener for the Huskies and Weir High’s third game.

“We saw North Marion early in the season this year so we kind of know what to prepare for, Stead said after the game. “We’re going to go down there and give it our best shot and see what happens. Hopefully, we can steal one and surprise some people.”

The Section 2 championship game will be held Friday, February 28 at the school with the higher seed. Then, the champions of both sections will clash Thursday, March 5 for the Region 1 title but both of those teams will advance to the state tournament in Charleston.