Wellsville’s hot start, cold shooting too much for Central to overcome 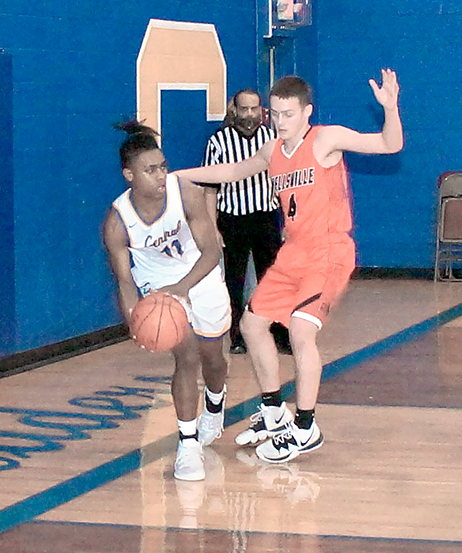 The Tigers, now 11-10, swished eight of their first 10 shots from the floor to grab a 20-8 lead after the opening quarter inside the Mickey Barber Gymnasium. They also were a perfect 3 for 3 from the line.

Justin Wright and Luke Green led the way with seven points each. The hot shooting continued in the second as Green knocked down a pair of triples and Wright canned three jump shots. The visitors were up 39-16 at the break.

“That was a great start for us,” said Wellsville coach David “Bug” Thompson. “We shot in really well in the first quarter and things were the same way in the second quarter.

“We’ve just been in a flow lately. I hope the guys stay like that going into the tournament. I was just real happy with our performance. We had double digit assists and shared the ball well. When you do that, you usually come out on top.”

Wellsville led 51-24 with eight minutes to go. Central, which was as cold from the field early as the Tigers were hot, made a nice run during the fourth quarter. The Crusaders drilled five bonus bombs. Freshman Anthony Venditti connected twice while Luca Connor, Ryan Anderson and Andrew Dorsey made the others.

“We really struggled shooting the ball tonight,” Central coach Don Ogden said after his team fell to 6-15. “I don’t even want to know our shooting percentage.

“To Wellsville’s credit, they played a real good match up defense and did a great job in transition. We did not do a very good job in transition defense despite emphasizing that as part of our game plan.”

“We’ve been playing much better defense lately,” Thompson said. “We’ve also been rebounding much better. We are really getting very aggressive on the boards.”

Connor had 10 to lead the Crusaders. He also led his team in rebounding with eight. Venditti netted nine points, all coming via the long ball. Anderson, Charles Miller and Dorsey scored six each.

“We have one game left to solidify that. We’ll regroup, we have to and we’ll go from there.”