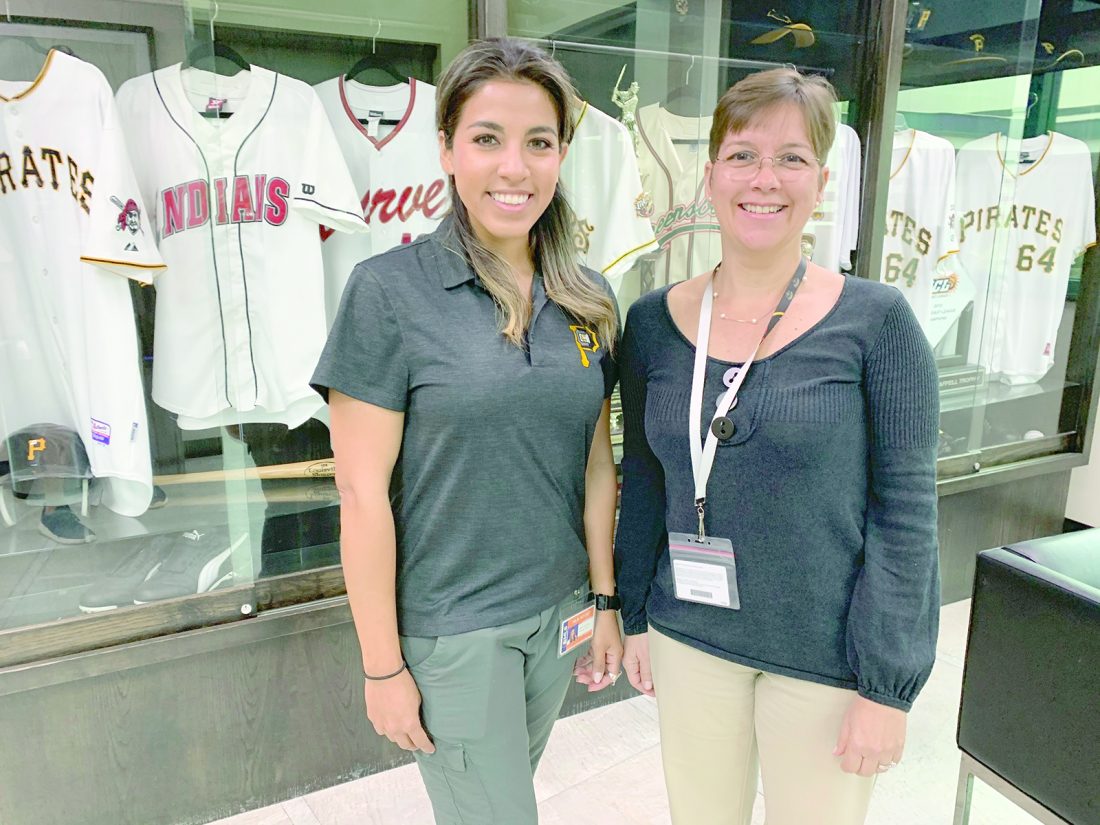 FOR THE LOVE OF THE GAME — Astrid DeGruchy, left, and Mayu Fielding pose for a picture earlier this month at Pirate City in Bradenton, Fla. DeGruchy is an international scouting assistant. Fielding works as the Pirates’ education coordinator. -- Associated Press

PITTSBURGH — By themselves, each has an impressive story.

Mayu Fielding started with the Pirates as an administrative assistant in 2007 and quickly moved into her current role as education coordinator, helping foreign players transition to life in America. Kinza Baad graduated from the University of Virginia in 2017 and is in her fourth year as a scouting assistant. Astrid DeGruchy does a little bit of everything, describing herself as the “air traffic controller” of the Pirates’ international scouting department.

Together, they’re writing an even more impressive and important story, one that’s about their own talents and also the example they’re setting for others.

“It’s very exciting,” Fielding said. “When I started here, I was probably the only woman in baseball, in this organization, for a while. There were women in other areas, but not in baseball. I’d often find myself in a room full of men.

“Now, there are more of us, we have important roles, and there are plenty of ways we can make an impact on people.”

Fielding, Baad and DeGruchy are highlighted here because of their direct influence on baseball operations, but they’re hardly the only talented women in the Pirates organization. It’s also true that Major League Baseball must continue to diversify, whether we’re talking about sex or skin color.

But considering it is March — Women’s History Month — it’s worth pausing and appreciating some of the special women the Pirates have working in baseball operations.

“For us to be great as an organization, we have to build the best baseball operations staff possible and build a better one than our competitors,” Pirates general manager Ben Cherington said. “If you’re trying to do that while looking at only half the world’s population, that would seem very limiting and wouldn’t make much sense to me if we’re trying to build the best staff possible.”

Fielding likes to equate her own feelings being the only woman in a room full of men to what a Pirates prospect from Venezuela or the Dominican Republic must feel coming to the United States for the first time.

An educator at heart, Fielding also treats young players like her kids, exhorting them to stand up straight and make eye contact, reminding them that body language matters.

“It’s not that they’re not interested; it’s that they feel intimidated,” Fielding said. “They need to get confidence. The same stuff that I learned being the only woman in a room full of men, that’s what I need to teach my players.”

Fielding has five kids of her own — three step-kids and two biological — but describes her role with the Pirates like a proud mom, where she remembers Gregory Polanco, Jose Osuna or Edgar Santana driving their beat-up cars to LECOM Park before her Pirate City classroom opened. Now, they have families of their own and communicate without the help of a translator.

The Venezuela native has funny stories about instructing Pirates prospects to not pull fire alarms, helping them set up bank accounts and, for one particular prospect, explaining what the phrase “atta boy” meant.

There’s no limit to what Fielding may be asked to do, as she’s also the principal for the high school the Pirates operate in the Dominican Republic, overseeing its curriculum, instruction and yearly graduation.

“The players are baseball players while they’re on the field,” Fielding said. “But once they leave the field, they’re regular people. We teach them all kinds of things so that they can become independent and carry those things with them wherever they go. It’s very rewarding.”

In addition to running her own classroom on the third floor of Pirate City, Fielding travels to the Pirates’ minor league affiliates throughout the United States, checking on guys’ progress and addressing any needs that arise.

She regularly fields phone calls from players who treat and trust her like they would their own mother, although Fielding jokes that she’s only answers after 9 p.m. if it’s an emergency.

“Most of the great players I’ve been around were really good at learning and taking that learning and turning it into skill and making adjustments, etc.,” Cherington said. “In large part, that’s what Mayu’s trying to do. Mayu and her staff help our young players learn how to learn.”

Baad played softball at the University of Virginia but used that time more to develop her future career in baseball. As a sophomore, she became an associate scout with the Dodgers, aiding with draft prep and scouting the Cape Cod League. By the time she was a senior, Baad had her position with the Pirates locked down.

Baad’s title is scouting assistant, although she’s done a variety of things with the Pirates. Director of pro scouting Steve Williams has continued to “dump a lot of stuff on her because she’s earned it.” In 2020, once baseball resumes, that will include scouting the Gulf Coast League and watching every game at PNC Park, writing reports every night.

Williams also has Baad working on trade research, specifically what the Pirates can glean about players from social media. After starting out as a part-timer, the Pirates made Baad a full-time employee about a year and a half ago.

“I have to slow her down,” Williams said. “That’s the biggest thing. She’s done a real good job. She’s grown tremendously in the last year and a half.”

In large part because of a work ethic developed through playing softball, too.

“She has a passion for the game, and she’s a tireless worker,” Williams added. “She’s earned the respect of our group and everybody in the front office.”

Baad, who did not want to be interviewed for this article, has always loved scouting and from an early age started to think about analyzing mechanics, what makes a baseball player successful or what tools might project years down the line.

The Seattle Mariners made history by hiring Amanda Hopkins in December 2015, as she became the first full-time female scout in 60 years, since Edith Houghton in 1951.

The profession has become slightly more accessible to women in the years since, but it’s still an obvious and enormous point of pride for Baad and others to hold positions in this particular department.

“It’s nice to, in a way, honor those women by the work I do every day and hopefully help other women be able to have a job like this one day,” Baad told WVIR-TV, Charlottesville’s NBC affiliate, in August 2017.

DeGruchy has a similar sort of passion and backstory. Growing up on Long Island, DeGruchy was a 5-foot-4 pitcher on her high school softball team and saw the writing on the wall.

At the same time, she loved the sport. DeGruchy would work out with her older brothers and actually film those sessions, later combing through the video frame by frame to find areas of potential improvement.

That passion has carried DeGruchy through a wild journey that has included undergraduate work at St. John’s University, then Arizona State’s Masters of Sports Law & Business Program and MLB’s Scout School, a program that was also completed by Cherington’s wife, Tyler Tumminia.

Along the way, DeGruchy has been a sponge, learning from former MLB commissioner Bud Selig — one of her professors at Arizona State — and countless others, especially some of the more influential women in the sport: Hopkins; Robin Wallace, a scout for the Major League Baseball Scouting Bureau and former executive director of the North American Women’s Baseball League; and Kim Ng, who’s currently MLB’s vice president of baseball operations in New York.

“There’s a lot of women in the game right now,” DeGruchy said. “Should we be doing a better job? Of course. But I think every organization has a couple women in their baseball operations department at this point, and that’s the biggest thing for me — supporting other women.

“I have a group of girlfriends who work in baseball. We talk all the time. We talk about issues that we all face, but that group wants me to succeed, and I want them to succeed. That’s the platform that we should be building to make us stronger.”

DeGruchy’s path to the Pirates started at the 2018 Winter Meetings, which were held in Las Vegas. That’s where she met the Pirates’ international scouting director, Junior Vizcaino. A native of Peru, DeGruchy introduced herself, described her love of baseball and ability to relate to Latin players. Vizcaino interviewed DeGruchy on the spot and later hired her.

Now, DeGruchy makes regular trips to the Dominican Republic and supports Pirates scouts in Taiwan, Australia, Mexico, you name it. Whether she veers more into scouting or management or something on the international side, DeGruchy is simply trying to learn as much as possible from Vizcaino and another veteran in their department, senior adviser Luis Silverio, whom DeGruchy called her mentor.

DeGruchy also praised president Travis Williams, Cherington and assistant general managers Steve Sanders and Kevan Graves for how they’ve treated her — like any other Pirates employee — and the togetherness that exists on the staff.

“I’m proud to work for the Pirates because they don’t view gender as you should be treated differently,” DeGruchy said. “That’s the best thing that we can possibly do in baseball — finding the right type of candidate because they’re the right person for the job. And not saying, ‘You’re a female, you can’t do this or that.’

“The Pirates treat everybody the same. If you’re qualified, they’ll treat you as they should.”