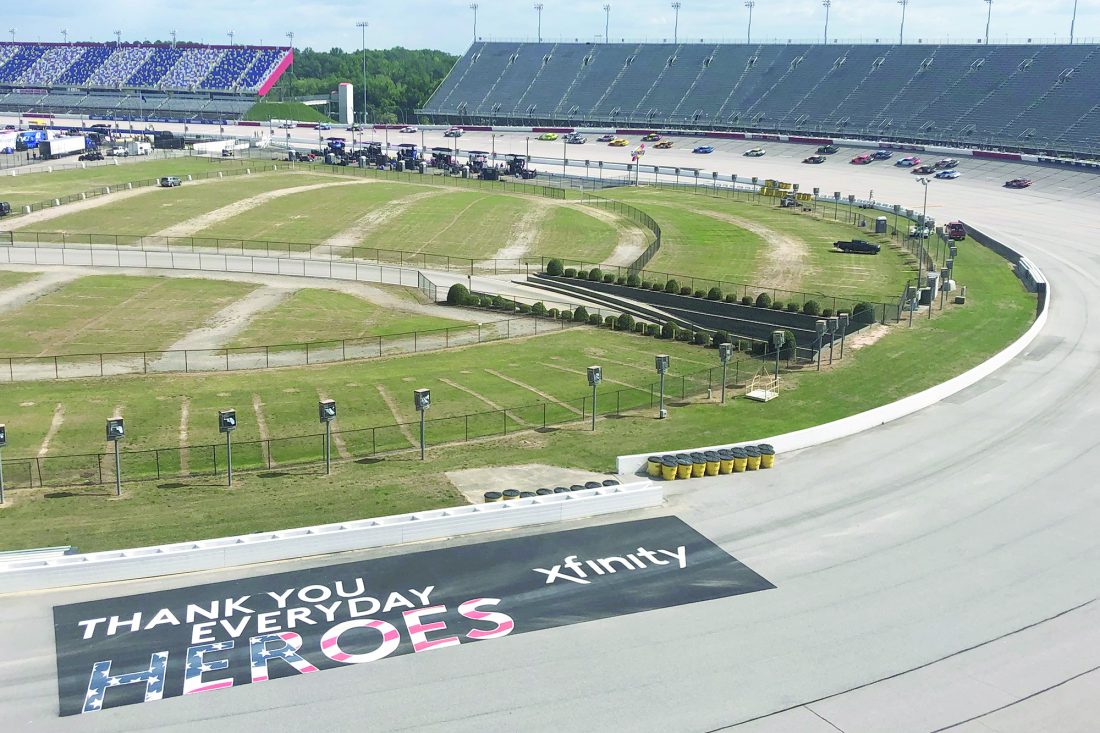 BACK ON TRACK — Cars go through a turn past a sign thanking people working during the coronavirus pandemic at Darlington Raceway Sunday, in Darlington, S.C. NASCAR, which has been idle for 10 weeks because of the pandemic, made its return with the Real Heroes 400 NASCAR Cup Series auto race. -- Associated Press

DARLINGTON, S.C. — Whenever Joey Logano doesn’t cross the finish line first at a NASCAR Cup Series race, he says he tends to have the same thought: “Golly, I wish I could do that again.”

The 2018 NASCAR champion and rest of the field will get to do it again: They will run the Toyota 500 (that’s kilometers, not miles) on tonight at Darlington Raceway just three days after the sport got back to racing after 10 weeks away due to the coronavirus pandemic.

NASCAR teams are creatures of habit with a well-worn routine of mechanical sessions, strategy meetings and track breakdowns and tendencies for wherever they’re headed.

While each season typically sees a Monday race due to bad weather, the pandemic has forced NASCAR to add a couple of weeknights into its schedule as it tries to make up the eight races it missed.

This will be NASCAR’s first Cup Series race tonight in 36 years — and that one was pretty historic as Richard Petty won his 200th career Cup race at Daytona International Speedway’s Firecracker 400 on July 4, 1984.

Cup regulars will race at least five times over the next two weeks, including Sunday’s return to racing at Darlington. Kevin Harvick led the most laps on the way to his 50th career victory. Like that one, tonight’s race will be without fans and with only essential personnel inside.

“I barely saw anyone all day” after getting into the car, Logano said.

Logano’s teammate, Brad Keselowski, said the nighttime start and varying weather conditions will make the track “Too Tough To Tame” a different animal and prevent drivers from just rubber-stamping Sunday’s plans for the second race back.

“I’m sure it will have a different feel,” he said.

NASCAR great Donnie Allison believes competitors will feel different getting back behind the wheel for competition so quickly. Allison, 80, won 10 times in 242 Cup events from 1966 until 1988. “I think I ran about every day of the week,” he joked by phone.

It was certainly a more rough-and-tumble time when Allison began with weeknight races as part of the Grand National Series, the forerunner of the Cup Series.

He remembers in the late 1960s racing in Maryland on Wednesday, Georgia on Friday and North Carolina on Saturday, the last a 400-lap event on a rugged dirt track.

Allison was so worn down by the schedule, he said, “I couldn’t sit up.”

“We’re going to find out who’s got the best mind over matter,” Allison said.

There are a few ironmen who want even more racing: defending Cup champion Kyle Busch plans on running four Cup races, two Xfinity events and a truck race at Darlington and Charlotte from May 17-28.

Chase Elliott, who finished fourth Sunday, liked not having any practices to test things out and just going racing. And the midweek racing reminds the 24-year-old of how he got started in youth racing, running whenever and wherever he could.

“Hopefully, we can kind of make this a trend and get back to our roots,” he said.

It’s a trend plenty of race fans might enjoy, Darlington President Kerry Tharp said. A midweek race or two might be a kick to longtime fans and perhaps destination viewing like Monday night NFL games or Thursday night college football.

“I think it’s something they can be excited about,” Tharp said.

For now, NASCAR’s best will manage without fans, families and perhaps even complete staffs they’d been used to before the pandemic.

Logano joked that when he was suiting up before Sunday’s race, he had two left shoes out instead of one of each. After finding a backup right shoe, he finished 18th in the race and is thrilled to get another chance at a win.

“Yeah, we only a couple of days to turn this thing around and come back down here,” he said. “But we’ve never really had the opportunity to come right back.”