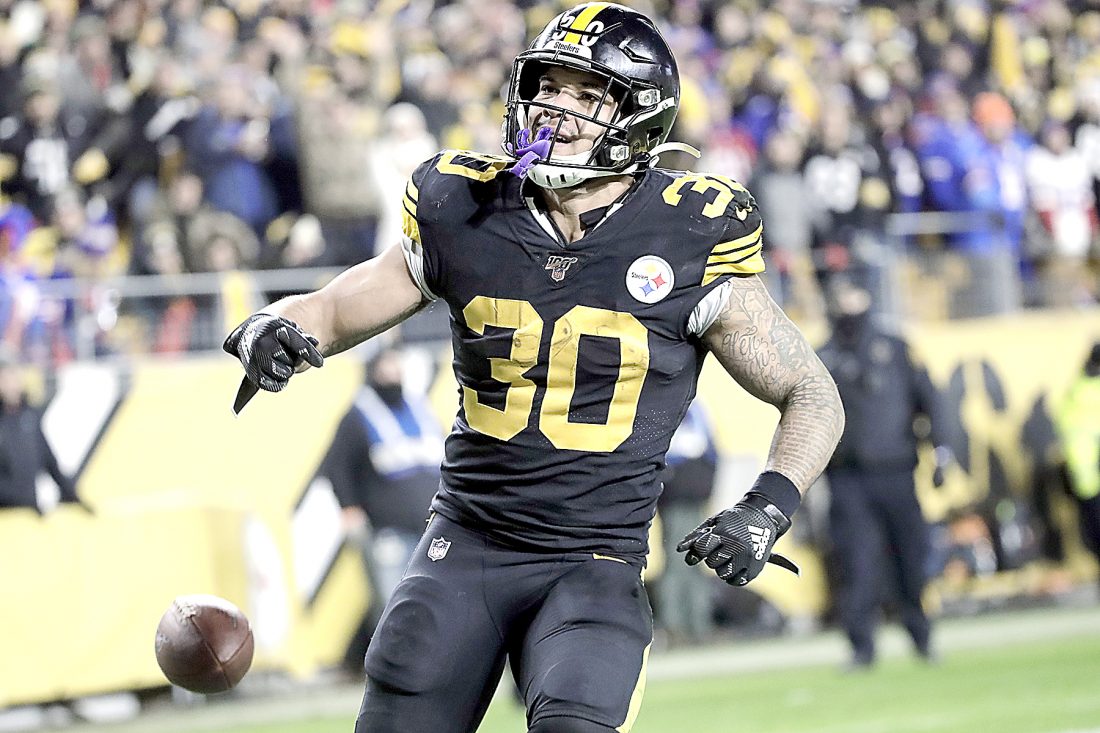 FOCUSES ON PRESENT — Steelers running back James Conner reacts during the second half of December’s game against Buffalo in Pittsburgh. Conner stressed he’s not concerned about his future as he enters the final year of his contract. The team declined to offer him an extension following three seasons in which he has struggled to stay healthy. “That’s the game,” Conner said. -- Associated Press

PITTSBURGH — James Conner didn’t treat the quarantine caused by the COVID-19 pandemic as an obstacle, but an opportunity.

While the shutdown forced the Pittsburgh Steelers running back to cancel a couple of planned vacations, it also gave him time — a lot of time — to filter out the noise heading into the most important season of his career.

“(It) helped me get away from all distractions,” Conner said Tuesday. “I’m not saying they’re all distractions, but not going out, to stay home and cook at home, and not be able to maybe go out on weekends. It forces people to stay home, so with that time at home I was just trying to get better.”

A process that included an aggressive workout plan designed to help Conner avoid the injuries that have dogged him since the Steelers took him in the third round of the 2017 draft.

While the 25-year-old has shown flashes at times and reached the Pro Bowl in 2018 thanks to an electric first half, he’s missed 10 games during the past two seasons and has topped 100 total yards just three times in his past 15 starts.

While general manager Kevin Colbert has repeatedly stressed the organization still believes in Conner, the club also declined to approach him with a new deal. Conner insists he didn’t take the decision personally.

“That’s the game,” he said. “I want to do a lot more so I can give a lot more to this organization. I trust the Lord’s timing. I’m not concerned about the extension. I know I’ve got another year left on my contract. I’ll give it all I got for one more year and see how it plays out. … I’m just going to ball out.”

Conner, who won a battle with lymphoma during his college days at Pittsburgh, isn’t concerned about his health being at risk whenever he and his teammates get back to work in person. He called himself “100 perent” ready to play under whatever safety guidelines are enacted to help combat the spread of the novel coronavirus.

“We’re going to play it safe, of course,” Conner said. “I’m not going to ignore it, but as far as me being scared or taking extra precautions because of my health history. That was four years ago. My body’s healed. When we follow the protocols and health guidelines, I’ll be just fine.”

Or, he hopes, better than that. He’s developed a rigorous workout regiment that he’s documented heavily on social media.

He raised eyebrows last week when he posted a series of pictures that included a look at his hulking back. The 6-foot-1, 233-pounder joked it was “just the angle” and that “lots of people look like that.”

Not exactly. Conner arrived in the NFL off a record-setting career at Pitt, where he developed a reputation as a bruising runner who would just as soon run over a defender as he would run by one.