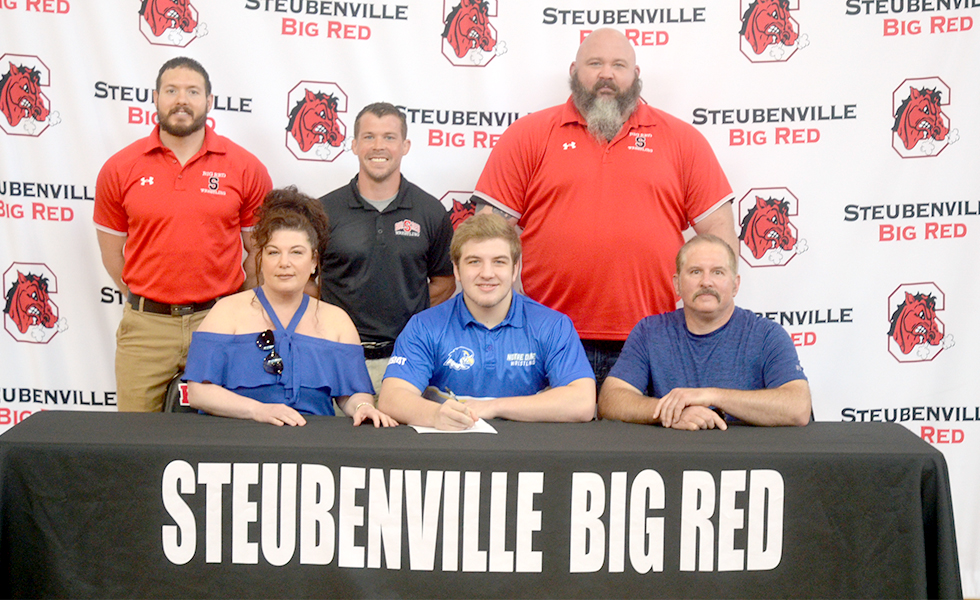 STEUBENVILLE — Keith Bodnar had an outstanding wrestling career at Steubenville Big Red. He hopes to do the same at the next level.

Bodnar, a four-year regular on the mat for head coach Mike Blackburn, recently announced he will attend NCAA Division II powerhouse Notre Dame College, which is located in South Euclid.

The Falcons didn’t take to the mat until 2006 but quickly rose to national prominence by capturing the NAIA national championship four years later. They repeated in 2007 before moving up to NCAA Division II for the 2012-13 season, where they placed third as members of the Great Lakes Intercollegiate Athletic Conference. As a D-II independent, the Falcons won national championships in 2014 and 2017 and have claimed a dozen individual national titles.

“Keith had a great high school career. What happened in the district finals last year motivated him this season,” veteran Steubenville High School head coach Mike Blackburn said. “He also lost a tough match in the OVAC finals this year (to St. Clairsville’s Reese Skaggs), but he battled back and avenged that loss in the postseason.

“He had a great sectional and district tournament and was prepared to make some noise at the state tournament before it was canceled,” Blackburn added.

“The coaches are great people. Everybody was so nice there,” Bodnar said of Notre Dame College. “The wrestling program is top-notch. I got to practice with them. It’s a tough school.”

He won’t forget his days at Steubenville.

“I’ll remember how great the coaches were to me and how we had a lot of success as a team in the Park Duals and the OVACs,” he recalled. “I’ll also remember all of the wins that I accumulated.”

Bodnar was 39-5 this year and finished with 141 victories against 55 losses. He placed fifth in the OVAC Ron Mauck Tournament as a sophomore and junior at 195 before advancing to the finals in his final campaign.

Not being able to compete in the state tournament as a senior is something that Bodnar hopes will help him later in life.

“You live and learn. You’ve got to build off of adversity. You can’t stop now,” he stressed. “You’ve just got to move on.”

Ashland and West Liberty topped the other schools that showed interest.

“Notre Dame is one of the best (NCAA) Division II programs in the country,” Blackburn added. “He loved it and they loved him. It’s a really good fit for Keith. He felt comfortable and so did his parents.”

Bodnar is the son of Keith Sr. and Melissa Bodnar of Bloomingdale. He plans to major in sports business.