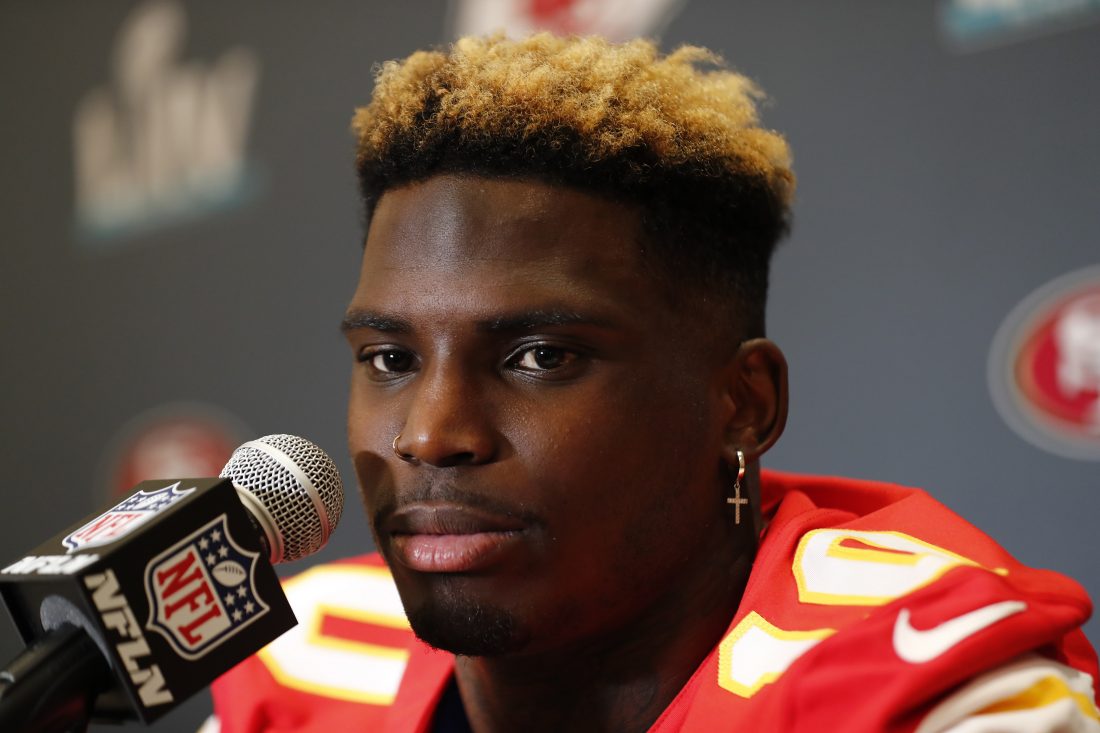 FILE - In this Thursday, Jan. 30, 2020, file photo, Kansas City Chiefs wide receiver Tyreek Hill speaks during a news conference ahead of the NFL Super Bowl 54 football game, in Aventura, Fla. A year ago, Tyreek Hill was a pariah, accused by his fiance of abusing his son. Now, he's a beloved Super Bowl champion raising money to help with the COVID-19 response and handing out free food to front-line workers. (AP Photo/Brynn Anderson, File)

KANSAS CITY, Mo. — The steady stream of nurses filing out of St. Luke’s Hospital for close to an hour was finally slowing down, which was altogether fortunate, because the young man with thighs like tree trunks was running out of food to give them.

It may have been the most impressive thing Tyreek Hill had done since running 2-3 Jet Chip Wasp.

The Pro Bowl wide receiver, who caught a 44-yard pass at the end of that route the first week of February to spur a Super Bowl comeback for the Kansas City Chiefs, had been talking to his mother about how much the world had changed. Hill had not run another route since that night in Miami, or caught another pass from Patrick Mahomes, after the outbreak of the coronavirus changed the daily life of pro football players and nurses, and everyone in between.

“My mom, she’s actually a nurse,” Hill explained, “and she always comes home and talks about how some people don’t care about them risking their lives every day. So I was like, ‘Mom, maybe there’s something I can do here in Kansas City for the health care workers, you know?’ It can be small. It can be big.”

So, they came up with the idea of delivering food to St. Luke’s last week. The little boxes of sandwiches were a welcome improvement from their usual fare, but it was the delivery guy behind the white mask that made the moment so special.

It was special for Hill, too.

Just over a year ago, the record setter was a league-wide pariah. He had been suspended by the Chiefs and the NFL after audio surfaced on the night of the draft in which his then-fiancee accused him of hurting his 3-year-old son. The district attorney launched an investigation, the Kansas Department for Children and Families became involved, and the odds appeared no better than 50-50 that Hill would ever step foot on an NFL field again.

“It was hard,” Hill said the week before the Super Bowl. “I’m not going to lie.”

The churlish nightmare eventually turned into a positive outcome.

First, the district attorney declined to press charges after he was unable to determine who caused injuries to the child. Then the league lifted its suspension and the team followed suit — not only welcoming Hill back for training camp but tying up the details of a $54 million, three-year contract extension.

Hill proceeded to break his collarbone in Week 1 against Jacksonville, but that was merely a four-game sidetrack on what turned out to be another sublime season. He caught 58 passes for 860 yards and seven scores. He helped lead dramatic comebacks each round of the playoffs. And ultimately, he caught a pass at the end of the now-famous 2-3 Jet Chip Wasp to help the long-suffering Chiefs win their first Super Bowl championship in five decades.

That’s another reason he was so keen to deliver food to front-line workers: For one day, Hill wanted to join their team.

“Me and my mom talk a lot about giving back,” he said. “That’s the way I was raised.”

With the world gripped by the worst pandemic in generations, it is exceedingly ironic that Hill seems at such peace.

He’s spent more time than he thought possible with his four kids: baby twins, a 1-year-old and his 5-year-old son. He’s getting a room added onto his house, the hammering providing the staccato-like soundtrack to a Zoom call last week. He’s financially secure — his whole family is, for that matter — and he’s a Super Bowl champion.

“It’s been great. I’ve had a chance to have all four of my kids, which is the hardest thing I’ve ever done in my life,” Hill said. “It is fun. It’s challenging. But it’s also like, a process of me bettering myself, so I’m enjoying it. Every step of it.”