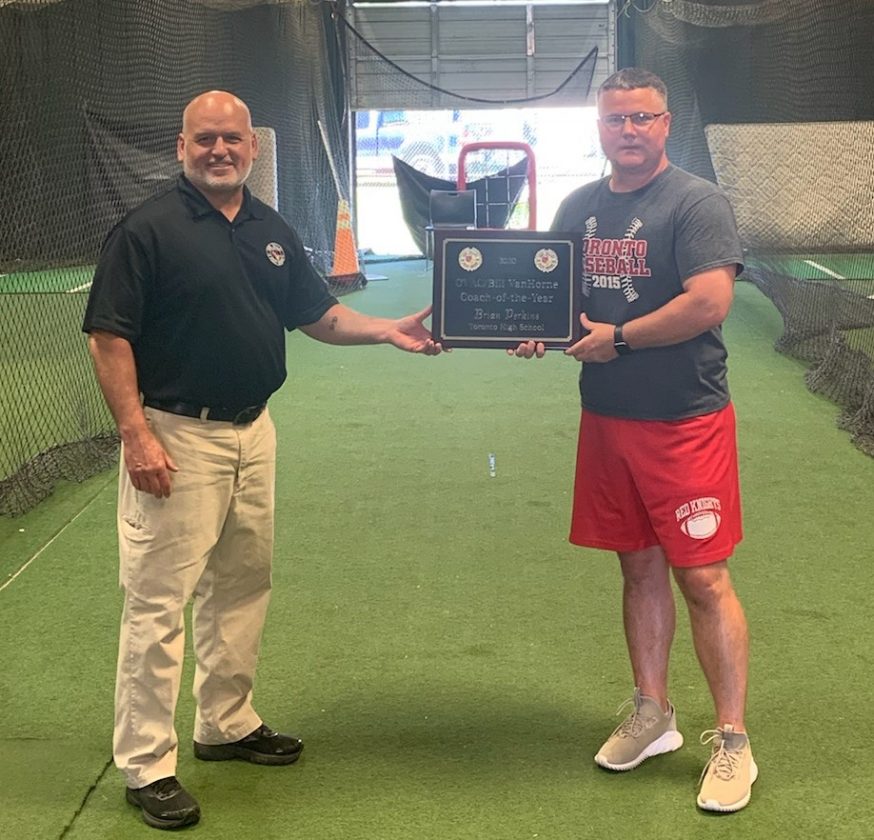 The personable Red Knights skipper was announced as the 2020 winner of the OVAC Bill Van Horne Coach of the Year during the conference’s virtual Banquet of Champions.

While formally accepting the plaque from OVAC Executive Director Dirk DeCoy, Perkins did so on behalf of the entire program, school and community.

“If it wasn’t for our players, coaches, support of the administration at Toronto City Schools and the community, I wouldn’t be standing here,” Perkins said. “I accept this on behalf of all of them. What an honor. I really appreciate it.”

Perkins joins Rich Wilinski, who was the 1975 winner, as the only Toronto head coaches to receive the award and becomes just the fourth baseball coach in OVAC history to receive the accolade. He’s the first since Harrison Central’s Justin Clifford in 2014.

The state championship was the first for Toronto since 1998. Now, almost a full year removed from receiving the trophy, Perkins called it a “unique” year.

Much of that stems from the fact the Red Knights will have to wait until 2021 to get a chance to defend their title after this year’s season was canceled due to the coronavirus pandemic.

“We’ve had a lot of great memories to look back on,” Perkins said. “It was a special group of players and coaches that made this quite a memory for us.”

The Red Knights, who finished 28-5 last season climbed to the top of the state’s baseball mountain by virtue of a 3-1 victory against Hillsdale in the state championship game. That came a day after they blanked Antwerp, 8-0, in the semifinals.

Toronto also claimed its ninth OVAC title with a 4-0 victory over Wheeling Central. The championship is the sixth under Perkins’ watch.

With their rings officially received during a banquet in late fall and now this award, Perkins officially sets his sights on the 2021 campaign.

“I told the guys that after Christmas break (2019), we were focusing on 2020 and what we accomplished in 2019 was in the past,” Perkins said. “Unfortunately, the COVID-19 happened and now we’ll officially close it and begin working on 2021.”

Perkins also pointed out the support of his family, including wife Jamie, son Zach (19) and daughter, Camryn (13).