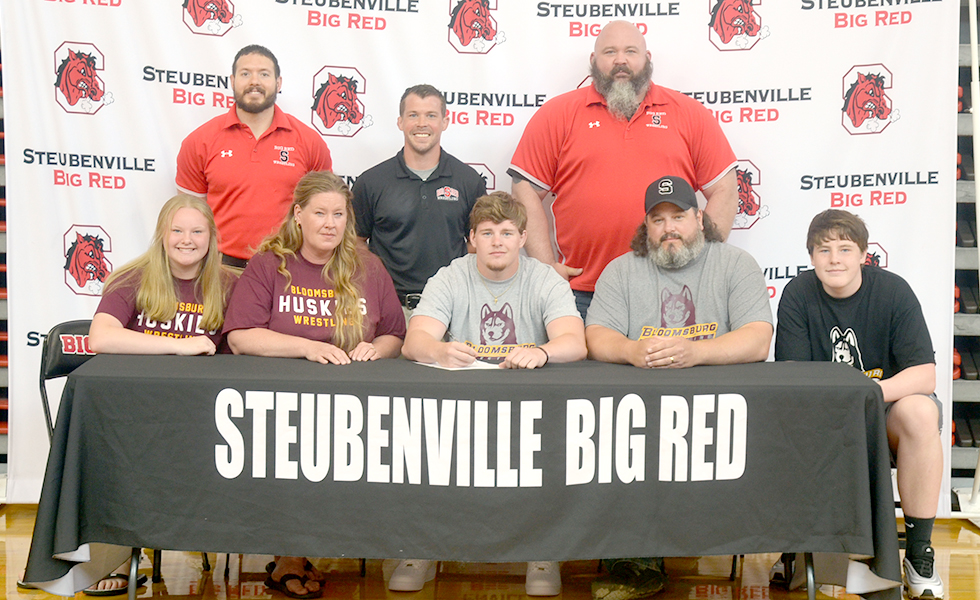 GOING TO BLOOMSBURG — Steubenville High School senior David Tuttle signed his national letter of intent to attend NCAA Division I Bloomsburg University of Pennsylvania this fall to continue his academic and wrestling careers. On hand for the signing were, from left, front, his sister, Emily; his mother, Amber; Tuttle; his father, Dave; and his brother, Peyton. Standing are Big Red assistant coaches Ian Whittington and Lucas Huffman and head coach Mike Blackburn. (Photo by Kim North)

Steubenville High School had four recent graduates wrestling at the NCAA Division I level last season. This year there will be five competing.

David Tuttle, a four-year standout on the mat and the football field, has announced he will attend Bloomsburg University of Pennsylvania this fall to continue his academic and wrestling careers. He will join former teammates Tariq Wilson (North Carolina State), Jashon Hubbard (Ohio State University) and Peyton Blasko and Anthony Rice (Cleveland State) at D-I schools.

“We’ve been blessed with some exceptional athletes over the past few years,” veteran Big Red head coach Mike Blackburn said. “It’s a nice accomplishment, but the big thing is these guys are going to college and they are going to get their degree which is the thing everyone wants.

“We’re glad that they are still competing but we want them to be able to get on with their lives after they graduate,” he stressed.

“David had an unbelievable career. He finished fourth all-time in school history in wins. When you look at the board, there are some pretty good names up there.”

“It’s a nice, small school. Everyone is close-knit,” Tuttle said of his selection. “It reminds me of home.”

Tuttle chose the Huskies over Ohio University, Edinboro and Clarion. They had a pair of national tournament qualifiers, the most since the school sent half-a-dozen in 2014.

Bloomsburg is a member of the Mid-American Conference in wrestling. All of its other sports are Division II and members of the Pennsylvania State Athletic Conference.

“It’s a tough Pennsylvania school that reminds me of Big Red,” he added. “You just continually go after it in practice and meets.”

A two-time Division II state placer, Tuttle really didn’t know what to say when asked how disappointing it was to not be able to compete this year due to the global COVID-19 pandemic. He was 36-6 and a sectional champion while placing third at the district level.

“I don’t know. I never really thought about it,” he admitted. He was eighth as a sophomore at 170 pounds and fourth as a junior at 182.

He said he won’t forget his days at Big Red where, he won the 195-pound OVAC Ron Mauck Tournament title as a senior by defeating Southern Local’s Hunter Morris. He placed second as a junior at 182, third as a sophomore at 170 and fourth at 160 as a freshman.

“Wrestling brought us all together. I made so many friendships during wrestling,” he said.

Blackburn thinks Bloomsburg and Tuttle are a good fit.

Tuttle said he is undecided about his major, but is leaning towards something in the nutrition or nursing fields.

Tuttle is the son of Dave and Amber Tuttle of Steubenville.