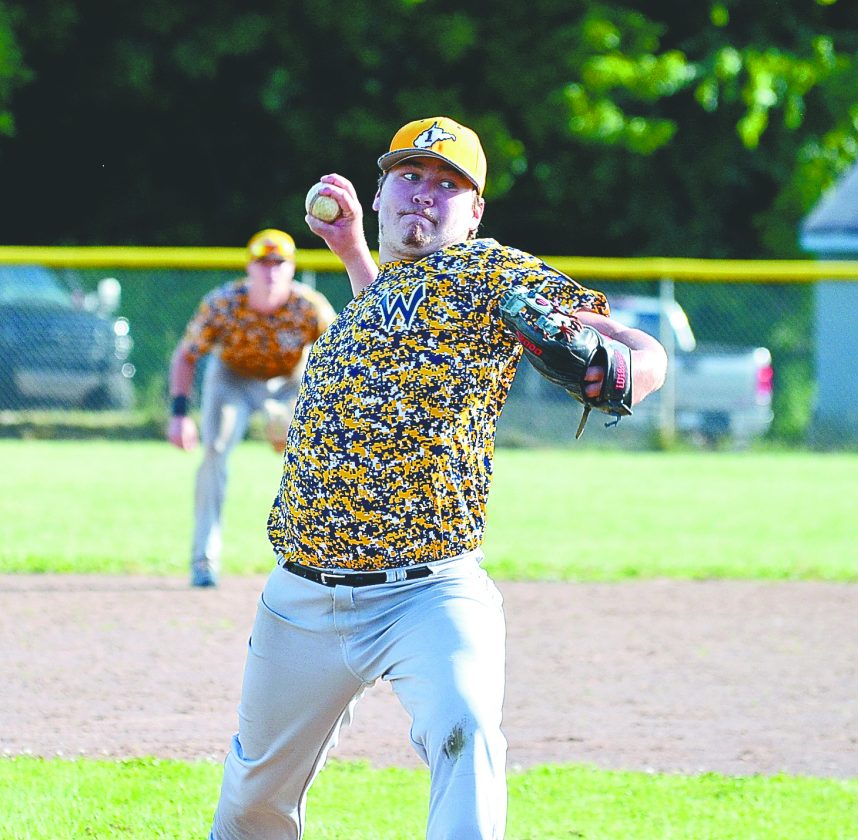 STRONG OUTING — The Wheeling Stogies’ Ryan Hummell delivers a pitch to the plate Thursday against St. Clairsville. He went six innings to earn the win in a 10-2 victory. (Photo by Kim North)

WHEELING — Two of the Ohio Valley’s premier summer baseball teams met on the Patterson Field diamond Thursday night. One looked like it was in midseason form, while the other looked a little rusty.

Ryan Hummell pitched six innings and the Wheeling Stogies (2-0) broke open a close game by scoring eight times in the bottom of the fifth inning in a 10-2 pasting of the debuting St. Clairsville Patriots.

Hummell, a former Wheeling Park standout who pitched at West Liberty this spring, held the Patriots to just four hits. He fanned seven and walked just one in drawing praise from his head coach.

“Ryan has been working out on his own and he was ready,” Wheeling manager Jon-Michael Brunner said. “He’s going to be one of our aces, so he looked good tonight.”

While Hummell was checking the St. Clairsville bats, the Stogies led 2-1 before sending 12 batters to the plate in the fateful fifth.

Gage Thomas had an RBI single in the outburst, which was aided by a trio of St. Clairsville fielding errors. Ben Foster picked up an RBI with a bases-loaded walk, while Dom Pompeo was hit-by-a-pitch with the bases full. Kaden Yocum had a sacrifice fly.

Tyler Tonkovich looked strong for four-plus innings, but his defense betrayed him in the fifth.

“We looked like a team that hadn’t played organized baseball in 10 months,” St. Clairsville manager Mike Muklewicz admitted. “You obviously don’t come here expecting something like this, but you do acknowledge the possibility this may happen. These kids haven’t played for a long time.

“I thought Tyler gave us five strong innings and I probably should have had someone ready there,” Muklewicz added. “But he threw well for his first time out.

“We were rusty at the plate and in the field. We kicked some balls around that we normally make plays on. It was just one of those nights.”