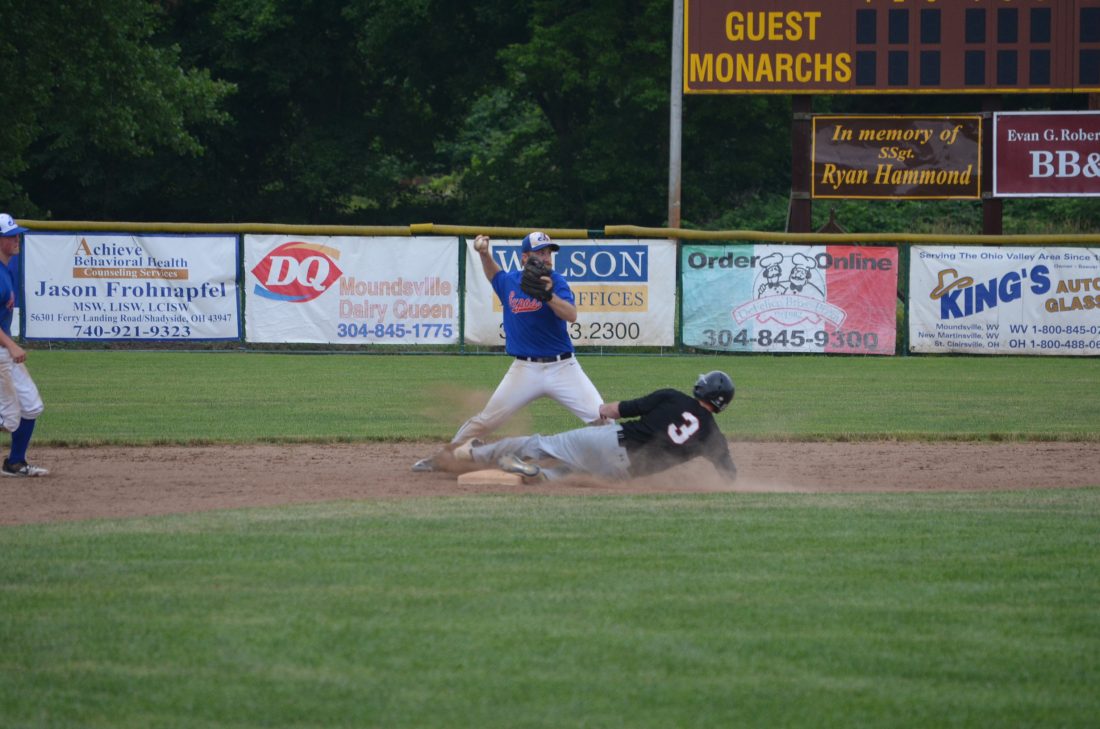 GLEN DALE — After four straight losses to Barton in the Ohio Valley Baseball League, Moundsville finally broke through Friday night. And in a big way.

With Matt Brooks firing a two-hitter, Matt Carnahan blasting a pair of home runs and Jake Stoner coming up clutch for the third time in a week, the Expos (6-7) blanked the visiting Braves (7-4) by an 8-0 count on the picturesque John Marshall High School diamond.

“We put it all together tonight,” Carnahan, Moundsville’s player/manager said. “This was a total team effort tonight. Matt did a heck of a job on the mound, we hit the ball well against tonight and we played really good defense.”

Brooks was in total control from the start. The veteran right-hander struck out six and only faced one batter over the minimum. He carried a perfect game into the fourth before Niko Petrides broke it up with a one-out soft single to center. He was erased on a double play. Tanner Werkmann roped a double down the left field line with one out in the sixth.

Brooks only needed 76 pitches in the 1-hour, 28-minute contest. Fifty-five were strikes and he threw a first-pitch strike to 13 of 22 batters.

“I felt really good out there,” Brooks said of his effort. “We played good defense behind me and we hit the ball.”

Garrett Scott singled in the only run Brooks would need with two outs in the third.

Carnahan launched a two-run homer in the fourth and sent a solo shot over the fence in left-center in the sixth. He now has six long-balls on the season. In between he was intentionally walked to load the bases for Stoner, who for the third straight time game got a hit. He singled to right-center that drove in two runs as the Expos tallied four. Joe Myers also singled in a run.

Tyler Blomquist suffered the loss for the Braves.

At Weirton, the Bobcats outscored the visiting Indians at Edwin Bowman Field.

Jacob Rosnick drove in four runs for the winners.