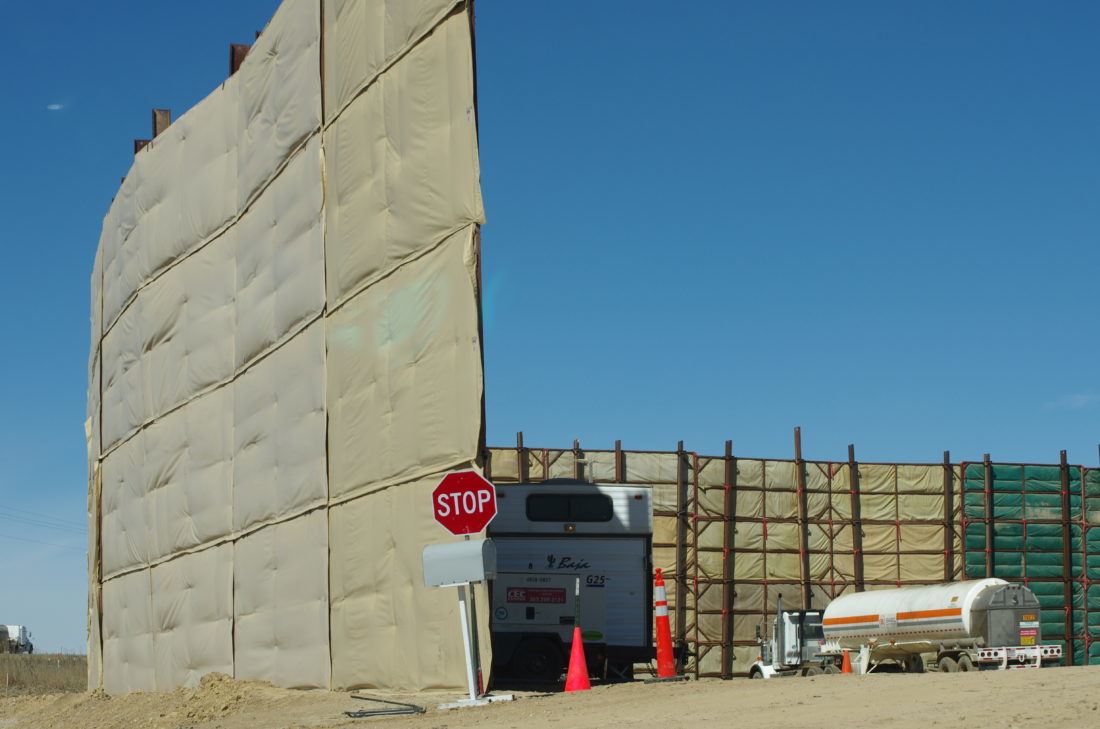 SOUND BARRIER — Some oil and natural gas drillers establish barriers in an effort to filter excessive noise from those who live near the operations. -- Contributed

Industry leaders, however, maintain their operations are safe, while highlighting declines in carbon dioxide pollution due to electricity producers switching their fuel sources from coal to natural gas.

The study, in which West Virginia University occupational and environmental health professor Michael McCawley participated, suggests those living near fracking operations can experience “sleep disturbance, cardiovascular disease and other conditions that are negatively impacted by stress.”

“People living near oil and gas development may bring up concerns like air pollution, traffic and groundwater safety, but many also complain about noise,” said Jake Hays, director of the Environmental Health Program at PSE Healthy Energy, a nonprofit research institute based in Oakland, Calif. “But until now, most of the research relevant to public health has focused on the impacts of air and water pollution.”

Fracking is the process by which drillers extract valuable natural gas, oil and liquids from Marcellus and Utica shale. Officials estimate it takes anywhere from 1 million to 10 million gallons of water to frack a single well, along with about 4 million pounds of sand, in addition to a chemical cocktail that can vary from company to company, in addition to individual operations within those companies.

Many of the chemicals frackers inject are found in products as common as soda, detergent and hair dye. Frackers inject these materials deep into the earth at a pressure as high as 10,000 pounds per square inch to shatter the rock in order to release the fuel.

Recently, officials working for the Obama administration’s Environmental Protection Agency said officials working on the government’s behalf “identified cases of impacts on drinking water at each stage in the hydraulic fracturing water cycle.”

In addition to methane, natural gas producers have confirmed the potential to discharge various amounts of pollutants into the air from the operations at well sites, compressors and refineries. These include benzene, carbon dioxide, nitrogen oxides, carbon monoxide, sulfur dioxide, carbon dioxide equivalent, xylenes, toluene and formaldehyde.

However, environmental researchers are now concerned with the noise drilling and fracking operations create. Indeed, the noise generated at the sites is such that some companies working in the Upper Ohio Valley establish sound barrier walls around their operations to mitigate the public disturbance.

“Oil and gas operations produce a complex symphony of noise types, including intermittent and continuous sounds and varying intensities,” PSE Healthy Energy Executive Director Seth Shonkoff, who is also a visiting scholar at the University of California-Berkeley’s Department of Environmental Science, said.

“Noise exposure, like other health threats, may disproportionately impact vulnerable populations such as children, the elderly and people with chronic illnesses,” the researchers state.

Industry leaders offer the noise barriers on fracking operations, including some in the Upper Ohio Valley. Moreover, officials with the Washington, D.C.-based American Petroleum Institute say fracking helps consumers save an average of $1,337 per household every year, supports a large number of U.S. jobs and curbs carbon dioxide emissions by replacing coal for electricity generation.

Just last week, Drew Cobbs, executive director of the Maryland Petroleum Council, touted the environmental positives of his industry in response to efforts to ban fracking.

“The industry is committed to safety and solid well construction, and the industry is committed to transparency in reporting the chemicals we use. That commitment, combined with technological innovations in horizontal drilling and hydraulic fracturing, has made the United States the world’s leader in the production of oil and natural gas, while also making our nation the global leader in reducing carbon emissions,” Cobbs said.