All Saints is about family, community 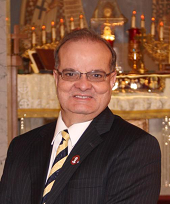 WEIRTON — Growing up in a tight-knit church community is something you never forget, according to Nick Latousakis.

As All Saints Greek Orthodox Parish president, he will welcome Archbishop Demetrios, Geron of America, and Pittsburgh Metropolitan Savas to the church for the 100th anniversary celebration Friday through Sunday. The church will be hosting several events, including Sunday’s Divine Liturgy, which Archbishop Demetrios and Metropolitan Savas will celebrate.

“Because what has happened with the local economy, while we were once a medium-sized parish, we are now considered a small parish,” Latousakis said.

The church faces challenges, including balancing other demands with church attendance on Sundays and opportunities for young people in the wake of the economic downturn. However, Latousakis is optimistic about the future. In just over a decade, more than $2 million has been invested in the West Street church, and the congregation is expanding.

“Thanks to the highways, we are a suburb of Pittsburgh now, and people can stay here for the lower taxes and small-town community while still having access to Pittsburgh,” he said. “We have been blessed with so many benefactors.”

Latousakis credits the expansion to a host of factors, including the Eastern Orthodox Church’s adherence to centuries-old services; All Saints’ youth group, headed up by Dr. Maria Tranto and Dr. George Dimitriou; and the church’s involvement in and commitment to the greater Weirton community.

Repeatedly, Latousakis pointed out others doing yeoman’s work, including volunteers who participate in the Greek festival, bake sales, pancake breakfasts and annual Thanksgiving dinner; charitable organizations including the American Hellenic Educational Progressive Association, Philoptochos Society and Daughters of Penelope; and those involved with the centennial celebration and anniversary church yearbook.

“We have a core group of volunteers who step up,” he said.

Latousakis has first-hand experience in volunteer work benefiting others, being an acolyte, Cub and Boy Scout and attending Greek School, where he learned to speak, read and write Greek.

“Growing up in the mid-sixties and seventies, if you were Greek, you had school after school,” he said. “I now realize how important it was — I can speak, read and write Greek as well as I can English.”

As a small child, Latousakis and some of his classmates would try to “get one over” on their teacher, but they quickly paid the price.

When he was 8 years old, Latousakis and his classmates were instructed to learn the Lord’s Prayer in Greek, and the girls did, while the boys didn’t — although they said they had. A week later, the students had confession and the priest encouraged them to recite the prayer before beginning.

“I said, ‘Father, can I tell you part of my confession first?'” Latousakis said. “‘I lied to the priest.’ He started laughing and said, don’t tell anyone, confession is between us. But I went back to the classroom, busted in with (the priest) right behind and told my buddies, ‘we’re doomed.’ … Some of the people I went to Greek School with are my closest friends today.”

Another Weirton institution celebrating its 100th anniversary this year is the Weirton Christian Center, and Latousakis, a board member at the Christian center, noted the strong relationship between the center and All Saints.

“It started as a Baptist ministry to help the immigrants,” Latousakis said, noting many faced a language barrier and hostility from those who thought they were after their jobs. “They helped teach people English, to read and write, and helped them fill out paperwork so they could get jobs at Weirton Steel. It’s one of the reasons the Weirton Christian Center is so near and dear to our hearts.”

The AHEPA Hancock County Chapter holds a dinner the Tuesday before Thanksgiving for those children who are enrolled in Christian center programs.

AHEPA was born through efforts of Greek immigrants assisting others throughout the country and also is approaching its 100th anniversary.

“(Immigrants elsewhere) weren’t always lucky enough to have a Weirton Christian Center or a Weirton Steel,” Latousakis said. “I tell our parishioners all the time, if they need help, call me. I don’t care what’s going on or what time it is. They call for help, and I’ll come to help and bring 15 Greeks with me. That’s just how it is — we look out for one another.

“We had people who had just come from Greece who stayed at our house until they moved on to their opportunity.”

The son of Greek immigrants, Latousakis is now an Archon of the Ecumenical Patriarchate, a member of the Order of St. Andrew, those chosen from among Eastern Orthodox laity for service to the church by the Patriarch of Constantinople.

Twenty-two applicants must go through six or seven levels of approval before they are personally reviewed and approved by the Patriarch. When Latousakis spoke about becoming an archon, he focused on “a light being shined” on Weirton, All Saints and the contributions of the church community instead of his own successes.

“Our commitment is to this community and this parish,” he said. “We are never going away. While some people see challenges, we see opportunities.”

The Weirton-Steubenville area boasts several archons, which speaks to the vibrancy of the Greek Orthodox community. All Saints archons include Michael G. Psaros, who will participate in the celebration as the speaker at Saturday’s gala, and the late Alexander G. Bellas. In addition, Holy Trinity Greek Orthodox Church has Nick Terezis and his father Dr. Nick Terezis. There are 800 archons out of 300 million Orthodox Christians.

“I think about the founders, and I don’t think they could have imagined we would be here, 100 years later,” Latousakis said. “That we would be in this magnificent church. … My mother told us she heard the roads were paved with gold and people ate from golden forks in America. The reality was different, but they persevered, they never gave up hope. They became successful and built a legacy.

“The most beautiful part of our church is the people, because without our people, we have nothing. Not only is (All Saints) a church, but it’s a beacon, a safe haven for all Greeks and Orthodox.”

Archbishop Demetrios and Pittsburgh Metropolitan Savas will celebrate the Divine Liturgy at 9 a.m. Sunday at the church located at 3528 West St. Orthodox Christians, friends and guests are welcome to attend, although communion will be limited to those of the Eastern Orthodox faith.

Additional seating will be available in the back of the sanctuary and elevator lobby. Parking is available north and south of the church, across West Street from the church and between the former Post Office building and the alley. Church officials ask those attending be courteous and park in the church’s lots.