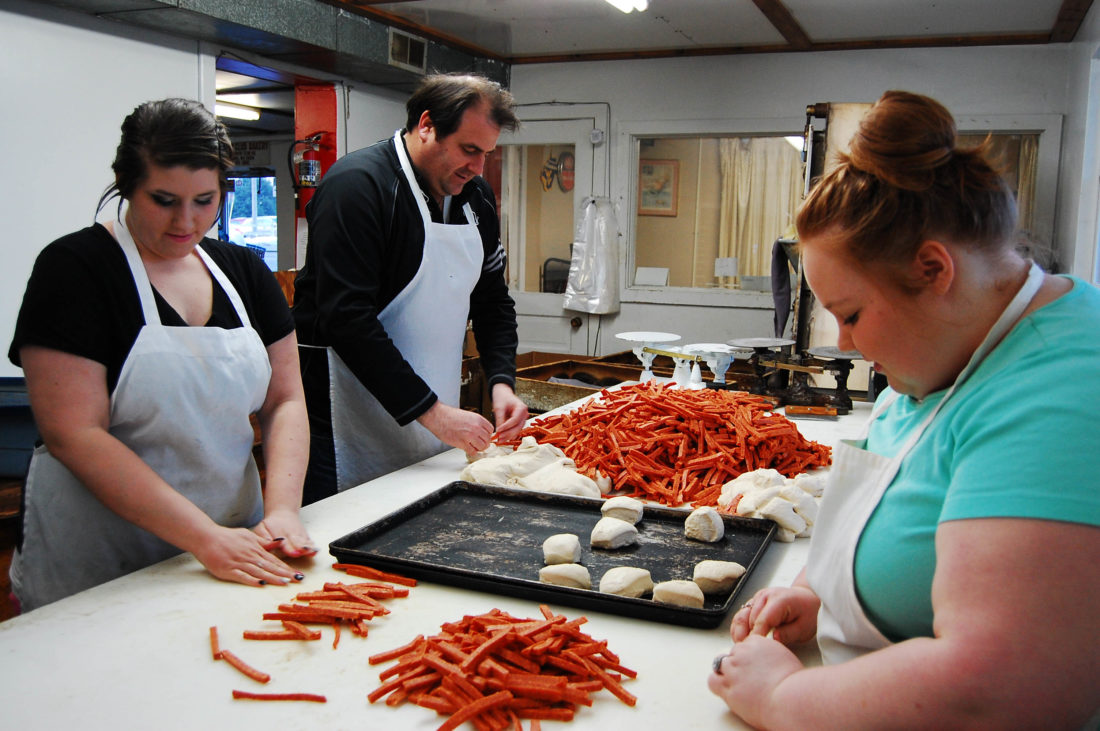 “That I’m going to have my book at a place where I used to go and buy books … it’s incredible,” she said.

Nelson, the daughter of Frank and Cathy Nelson of Wellsburg, will sign copies of her book, “The West Virginia Pepperoni Roll,” from 4 p.m. to 6 p.m. June 10 at PRIME of Weirton (Weirton Book Co.) located at 2200 Pennsylvania Ave.

“I think that (PRIME owner Dave Rogerson) will even have some pepperoni rolls from Granto’s Deli for people to munch on,” Nelson said.

The meet-and-greet begins at 4 p.m., which will be followed by a talk and question-and-answer session at 4:30 p.m.

One part history, one part ode and one part cookbook, Nelson’s book, like its subject, is more than the sum of its parts. Nelson always has been a pepperoni roll proponent, but the book rose out of a series of stories she did as a general assignment reporter for the Charleston Gazette-Mail — the 2013 campaign to make the pepperoni roll the state’s official snack.

“There was a lot of things going on and it just kind of fell by the wayside,” she said of the bill’s failure.

However, the string of articles — along with her Appalachian food blog, Candace Lately — positioned her as the perfect person to write a book dedicated to all aspects of ubiquitous the pepperoni roll.

“It really has become prevalent in our culture,” Nelson said. “It’s in school lunches, it’s used as fundraisers, its at ballparks and arenas, cooking competitions, festivals — the (West Virginia) Three Rivers Festival has a pepperoni roll contest and the big league eaters compete in it.”

The pepperoni roll has its roots in coal mines, as much of West Virginia history does. Likely first created by miners’ wives in north central West Virginia — pepperoni sticks and hard Italian bread was a common snack — it was Giuseppe Argiro of Country Club Bakery who first commericalized the snack, sometime in the late 20s or early 30s.

Appalachian dishes are becoming more trendy, and Nelson encourages West Virginians to take ownership of the unique dishes native to the state and appreciate their roots in mining and mountain culture.

The pepperoni roll is simple, but varied. Nelson explained there are fans of pepperoni sticks, slices and ground pepperoni; hard bun or soft; and additions, such as red sauce, cheese and peppers. In addition to favorite variations on a theme, pepperoni roll fans also are partial to particular bakeries.

“It’s usually the one they grew up with,” Nelson said.

Nostalgia can be a deciding factor in which pepperoni roll tribe a person falls in — from pepperoni preference to the favored type of bread.

“I remember in high school, when the teachers would let us out one minute early, and my friends and I would go down to the cafeteria and get pepperoni rolls,” she said. “They were delicious.”

On going to college, Nelson was surprised to discover that pepperoni rolls were a regional food.

“When I went to Morgantown to go to school, I met people from outside the area who had never heard of pepperoni rolls,” she said. “I was surprised. I asked, ‘but what did you sell for fundraisers?’ There are a lot of things you could sell, but I hadn’t given it a second thought.”

Nelson will be combining the first leg of her mini-book tour across the state with her family reunion.

“They’re all very excited (about the book),” she said. “They’ll probably all pile in.”

Of course, pepperoni rolls will be on the menu at the reunion.

“Candace Nelson offers us an insider’s take on the pepperoni roll, exploring the history, science, great pepperoni roll debates (sticks v. slices, Sheetz v. the people of West Virginia), cultural context, regional variations, and adaptations as only a native could,” Hilliard stated. “As the nature of my work as state folklorist takes me all over West Virginia, hungry both in appetite and in my quest to sample local traditional culture — including foods — I am grateful to have such a guide.”

With more than 100 photographs, recipes and recollections, “The West Virginia Pepperoni Roll” tells the story of the immigrants, business owners, laborers, and citizens who have eaten the pepperoni roll since its invention.

“The West Virginia Pepperoni Roll” will be released by WVU Press June 1.

For information, visit CandaceRoseNelson.com/Book or Nelson’s blog, CandaceLately.com. She also writes a food column for the Charleston Gazette-Mail.