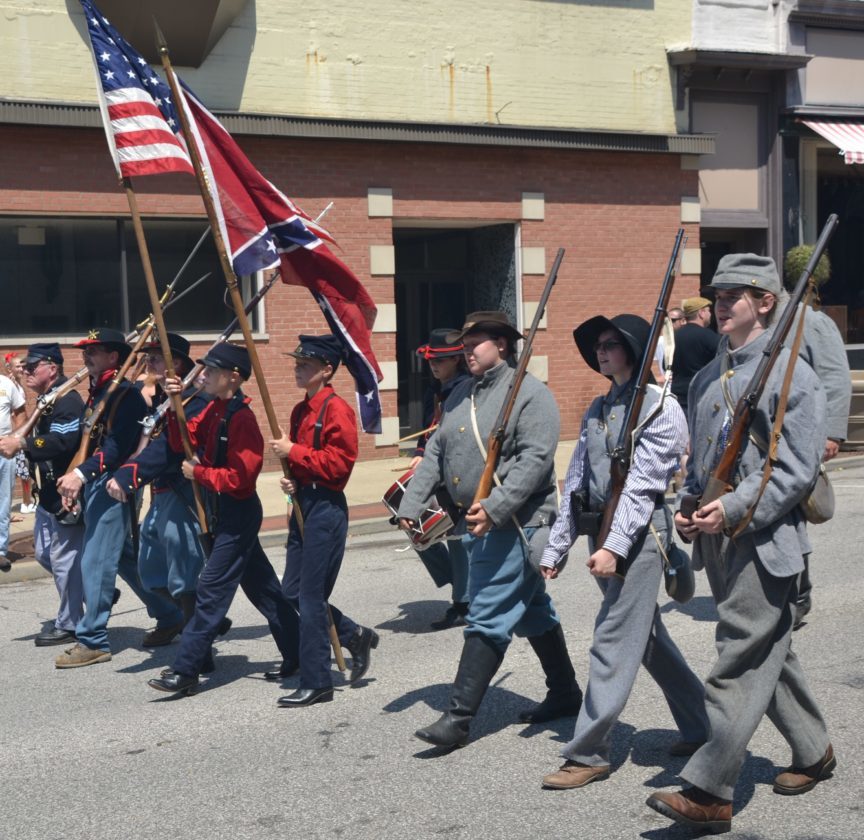 PARKERSBURG — Most Civil War re-enactors say their effort is about heritage and history, not bigotry and hate.

With the debate on removing Confederate monuments and whether people should fly the Confederate flag taking up a lot of attention across the country, in West Virginia, for the most part, Civil War re-enactors haven’t had to deal with much criticism, but the issue has popped up at some of their events.

Groups such as white supremacists, Neo-Nazis and people referred to as the “alt-right” marched through the University of Virginia in Charlottesville, Va., on Aug. 11 after the city council there approved plans to remove a statue of Confederate Gen. Robert E. Lee from a park. Many people carried variations of the Confederate flag, which has become a popular symbol for such groups. One woman was killed and 19 others injured when a car was driven into a group of counter protesters.

During the Parkersburg Homecoming Parade on Aug. 19, as members of the local Civil War re-enactment group Carlin’s Battery D marched down the street, a woman in the crowd said to them, “Do you really think that is a good idea?” She apparently referred to the Confederate flag that was being carried by the procession — made up of members dressed as Union and Confederate soldiers.

Jim Miracle of Vienna, one of the leaders and organizers for Carlin’s Battery D, said there are a number of events re-enactors participate in that have been impacted by the tone of recent events.

In Newton, N.C., a man was arrested for pepper-spraying Confederate re-enactors in a parade.

Miracle said it is a shame people are trying to do away with history and the lessons it can teach.

“History is history,” he said. “You can take down all the monuments and flags you want, but it doesn’t change the history. … People today are not responsible for what happened then, but we shouldn’t forget our past.”

Carlin’s Battery D has a roster of 18 members and the group is planning to increase its numbers. The recent actions against some re-enactors have prompted some to join up.

“Many still want to remember where we came from,” Miracle said.

Carlin’s Battery D was planning to attend the Blue and Gray Days in St. Marys, which began Friday and continues through Monday.

“We will go on,” Miracle said last week. “We hope nothing happens.”

John Haddox of St. Marys, who helped organize the Blue and Gray Days, said he had some groups who contacted him who would not be able to attend, but did not know the specific reason they would not be attending.

So far, he has not seen a lot of backlash in regard to Confederate symbols used by re-enacting groups in West Virginia.

Bill Beardsley Sr., who lives about 20 miles north of Marietta, was marching in the Homecoming Parade with Carlin’s Battery D and heard the comment from the crowd. People who know nothing about the Civil War will look at the Confederate flag and just assume all white people who carry it are racist, he said.

“It surprises me,” Beardsley said. “I don’t have a racist bone in my body.”

When they do re-enactments, there are times when one side won’t have enough people, and people will be asked to fill out the numbers so the demonstration can go forward. Many re-enactors have uniforms that represent both sides.

“It is hard sometimes to get Union soldiers,” said re-enactor Fred Cordell of Harrisville. “In Ohio, they have the opposite problem. They can’t get enough Confederates.”

So Cordell has played many roles from a soldier to an officer. He said groups have taken the Confederate flag and turned it into a symbol of hate, which in turn gets certain groups upset with re-enactors.

“We are not a symbol of hate, but of heritage,” Cordell said. “We (in West Virginia) are proud of our heritage.” West Virginia was the only state born out of the Civil War.

“There are a lot of people in Parkersburg who don’t know that,” said Eric Saho. The 17th Virginia Cavalry was made up of people from Wood, Wirt, Jackson and Roane.

It was his son who convinced him to get involved in reenacting and it has allowed them to bond.

As their procession walked down Market Street in the Homecoming Parade, the American flag maintained the position of honor, with the Confederate battle flag to the left and lower.

“We all marched together in solidarity,” Saho said adding people need to do that across the country.

“The solution is for us to come together,” he said. “You can take down all of the monuments, but it won’t solve the problem.”