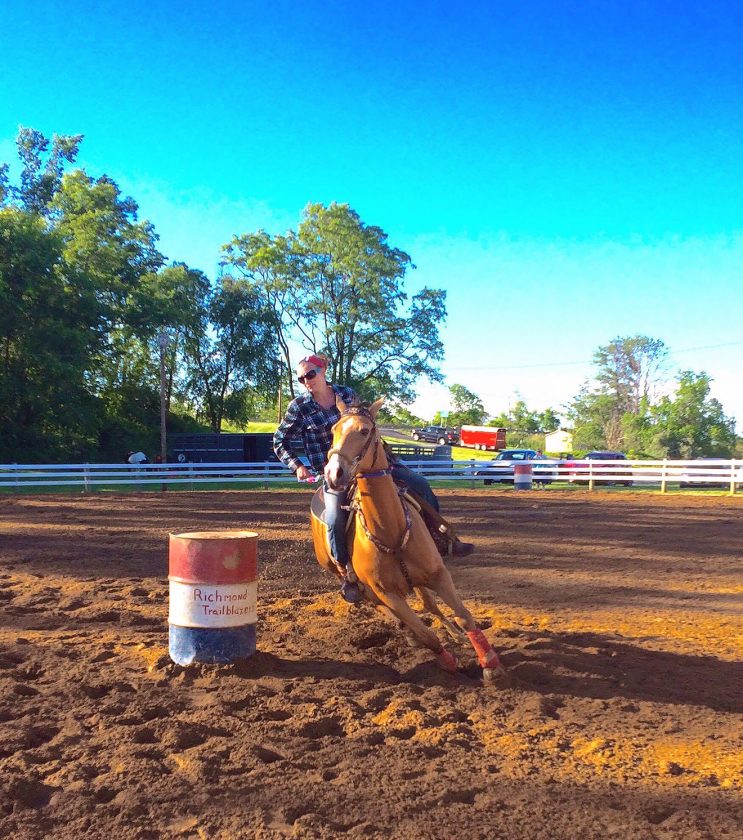 AROUND THE BARREL — Kirsten Turner competes during the 2019 season at the Steubenville Saddle Club grounds in Richmond. For a second year, Turner is organizing a series of fun shows that will be held in addition to the club’s regular show season. -- Contributed

RICHMOND — Fun show dates for the Steubenville Saddle Club have been announced, according to organizer Kirsten Turner.

Light refreshments will be available.

“We plan to do a ‘buckle series’ so we also will be looking for a sponsor or two,” noted Turner, who has owned and shown horses “my entire life.”

She can be contacted about the shows — and any possible changes — or regarding sponsorships by calling (740) 424-7014.

A fun show, she explained, is “a speed/timed event with fun classes, all different types of ‘fun’ classes. Anyone is welcome, any age or discipline. The whole idea of it is to just have fun and relax and enjoy an evening at the arena watching kids and people have some relaxed fun,” she noted.

Turner has been a member of the Steubenville Saddle Club for about 10 years.

“I’ve started this fun show to bring some more local shows to the area, and something fun and relaxed for people in our area,” she explained, adding it is intended to raise more awareness about the saddle club.

“More people have an interest in contest type classes, and our regular shows don’t offer a big variety for contesters, so I thought I’d bring that type of event to our area,” Turner continued. “I’ve been to several ‘fun shows,’ but there have never been any around this area. I wanted to bring something to our community for people to enjoy. This will be the second year for these shows.”

The “buckle series,” she explained, “means that we will tally up the scores/points from all three shows for each contestant, and the highest point holder will win a fun show belt buckle. It’s just casual competition, with some ‘encouragement’ to attend all the shows.”

“If anyone would like to sponsor this event, or donate toward the buckle, it would be a great help to go toward something fun in our area,” she noted. “I’d like to encourage competitors to take a step back from all the hustle and seriousness of showing and relax at a fun show.”

The fun shows are in addition to the Steubenville Saddle Club’s regular show season schedule, which had been set to kick off Sunday, but that has been canceled.

The rain-or-shine events begin at 9 a.m. with halter/showmanship classes. Cassandra Russell is the judge. Contest classes do not begin before 3 p.m. The other show dates, barring any changes, are June 14, July 12 and Sept. 13.Admission is free to the shows, and they are open to the public. The clubhouse features a variety of food with eat-in facilities.