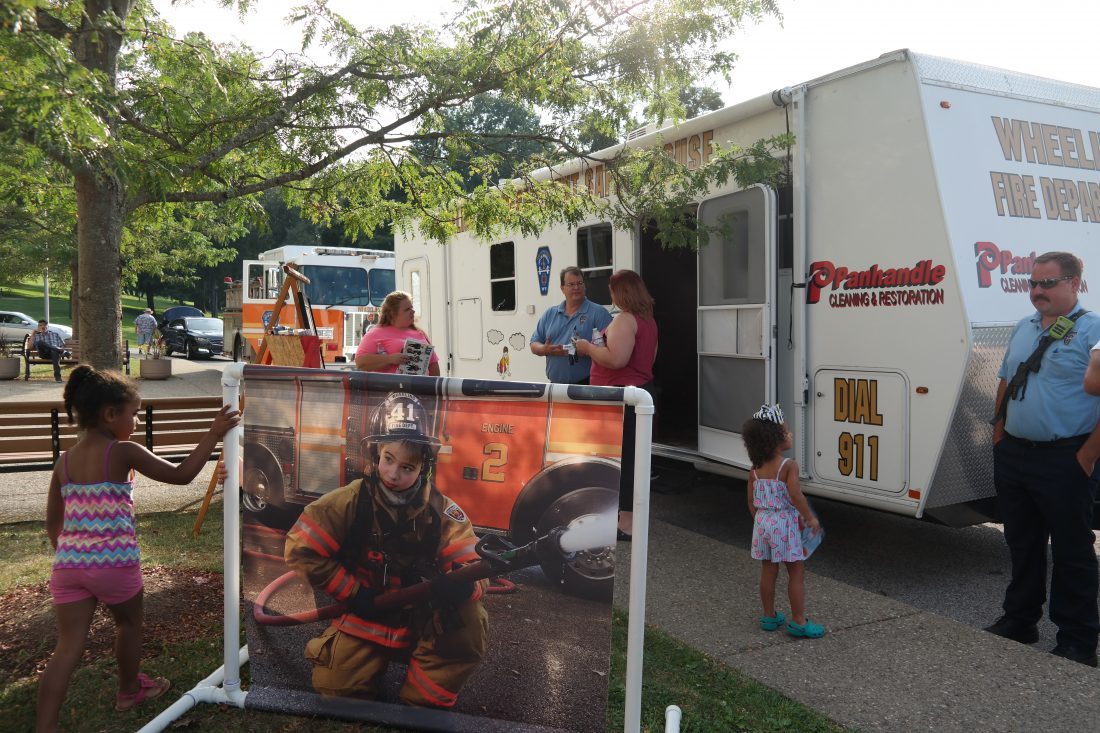 WHEELING — Law enforcement agencies and families across the Ohio Valley came together on Tuesday night for an evening of fun, learning and strengthening community.

Hundreds of residents attended separate National Night Out celebrations in Wheeling and Bridgeport designed to improve relationships between neighbors and law enforcement officers.

National Night Out, now in its 36th year throughout U.S. is an annual community-building campaign that “promotes police-community partnerships and neighborhood camaraderie,” according to its website.

In Wheeling, about 250 to 300 people turned out for National Night Out held at Wheeling Park’s Ice Rink. The free event was hosted by the Wheeling Police Department, Wheeling Fire Department and other local law enforcement agencies.

At the event, families were able to meet with law enforcement officers, learn about what they do and examine some of their equipment. Attendees could crawl through the back of a police cruiser or hop onto a police motorcycle.

The many families in attendance learned about fire safety from the Wheeling Fire Department, participated in WPD’s drunk driving bicycle simulation and worked with the Ohio County Sheriff’s Office Critical Incident Response Unit.

Several law enforcement agencies and local nonprofits were in attendance at the event to speak with Wheeling residents and provide demonstrations, including the West Virginia Bureau of Alcohol, Tobacco, Firearms and Explosives, new to the event this year.

“We work with all of these organizations, so we just invite them to come on board, hand out some information about what they do,” Schwertfeger said. “Hopefully the community walks away with a little more knowledge about what resources are out there. But most importantly that they get a working relationship with law enforcement.”

Schwertfeger further stressed the importance of law enforcement officers working with children to teach them about their profession.

“If we can make an impact at a young age with a child, that’s what we’re gearing for. That’s what it’s always about,” Schwertfeger said. “I’m very proud of the Wheeling Police Department officers because they take that to heart and many of them get out of the cars and do what we’re doing here tonight on a daily basis while they’re working the beat.”

Also in attendance at Wheeling’s event was U.S. Attorney Bill Powell, who visited Wheeling, Bridgeport, Martinsburg and Clarksburg to celebrate with local officers and residents.

“For 36 years, National Night Out has rallied neighborhood residents, law enforcement and community leaders in the common goal of strengthening relationships to help prevent and deter crime in our local community. I am proud to stand with my colleagues and my neighbors to support safer streets and work together to drive out crime,” Powell stated in a press release.

In Bridgeport, the village’s police department were joined by the Belmont County Sheriff’s Department and the Wolfhurst VFD, as well as local elected officials.

Toward the beginning of Bridgeport’s event, the STAT MedEvac helicopter made its debut, flying in over head as the Bridgeport High School band played the National Anthem. The MedEvac landed in the parking lot of the school. Once it touched the ground, children gathered around to take photos with the pilots and check out the interior of the aircraft. Bridgeport resident Zachary Smith, 6, climbed inside of the helicopter to have his photo taken by his mother. Smith said it was “very cool” and his favorite part of the event.

Another highlight of the event was the K-9 demonstration which also drew a large crowd as officers from the Belmont County Sheriff’s Office and the Bridgeport Police Departments demonstrated some of the advantages of having a K-9 Unit. The dogs showed off their special abilities, taking commands from the officers and taking down a man dressed in head-to-toe padding that acted as a “bad guy” in the scenario.

Bridgeport Police Chief John Bumba said the event turnout was great and was happy the weather held out on the beautiful sunny day.

“The school helped out tremendously on this,” Bumba said. “I got nothing but praise from the new superintendent (Brent Ripley). He said we did a great job.”