W.Va. Republicans rally at The Greenbrier 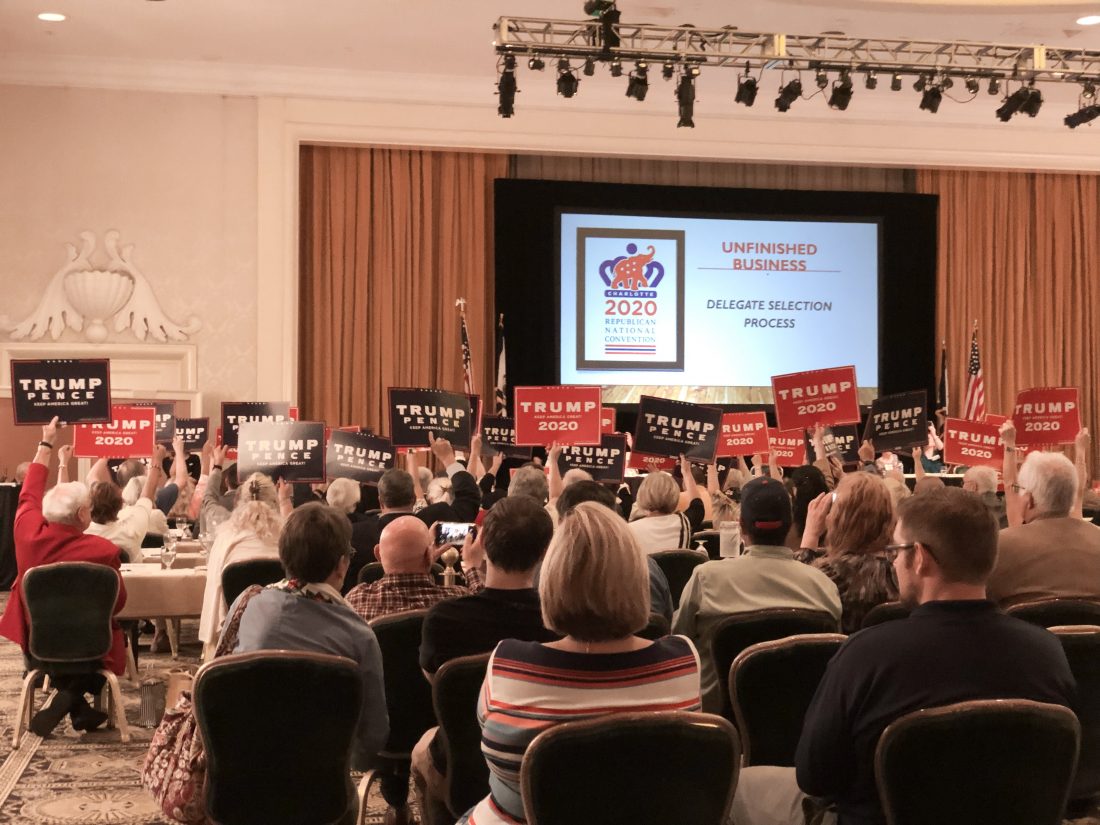 WHITE SULPHUR SPRINGS — Members of the West Virginia State Republican Executive Committee were encouraged Saturday to channel the spirit of the 1980 U.S. Olympic hockey team that came out of nowhere to defeat the seemingly unbeatable Soviet Union for the gold medal.

Committee members heard from Justice, who is seeking a second term, during lunch Saturday, as well as from other Republican members of the Board of Public Works and a panel chaired by Republican women in elected and appointed positions.

The executive committee met Saturday afternoon to hear reports from state party officials and consider resolutions. Melody Potter, chairwoman of the state party, reminded executive committee members that just like the 1980 U.S. Olympic hockey team, many did not think Republicans would ever sweep the House of Delegates, state Senate, the Board of Public Works, and have a Republican governor at the same time.

“What does hockey have to do with politics?” Potter asked. “Nobody thought that the United States Olympic team was going to beat the Russians … They were the underdogs. We’re sitting here today and we’re not under Democratic rule in this state. People thought we couldn’t do it. We were the underdogs, but we’ve done it.”

Republicans took both chambers of the West Virginia Legislature in 2014. By 2016, Republicans had the offices of Attorney General, State Auditor, Agriculture Commissioner, and Secretary of State. In 2017, Justice switched parties from Democrat to Republican. U.S. Sen. Joe Manchin is the only Democrat in West Virginia’s congressional delegation.

Going into the 2020 election, the state party has nearly $90,000 between its federal and state campaign finance accounts as of Aug. 17. The REC’s Audit Committee found no discrepancies in the party’s books since 2016. The state party has a total annual operational budget of $119,699.

One of the big issues state party executive committee members decided was how to select delegates to the 2020 Republican National Committee Convention Aug. 24-27 at the Spectrum Center in Charlotte, at which time delegates will nominate a candidate for president.

Typically, Republicans wishing to be convention delegates file as candidates and are voted on during the party primary in May. Instead, party leaders and President Donald Trump’s campaign officials sought a change where instead of being voted on, Republicans wishing to be convention delegates would fill out an application and submit it to the state party. After the primary, the applications would be turned over to the Trump campaign, who would then choose the delegates.

Joshua Findlay, regional director for the Trump campaign, said only three states have switched to this format, with Alabama voting on a similar proposal over the weekend as well. Findlay said it was important for Trump to go into the convention with strong support.

Committee members were presented Saturday with a signed letter from Trump encouraging them to support the new convention delegate process.

“I want to thank you in advance for your great work with my campaign team to make the delegate selection process more efficient,” Trump wrote. “We must have enthusiasm of the party activists and grassroots workers at our convention in Charlotte.”

Byron Fisher, the new executive director for the state party, pointed out that only small percentages of state party executive committee members get voted on as convention delegates. The president wants people there who represent West Virginia.

“In 2016, only seven of the 65 members of the delegation were state executive committee members,” Fisher said. “In 2012, only eight of the 59. There have been calls from many groups to change this method.”

County clerks have expressed support for removing the convention delegate process from the ballot. Putnam County Clerk Brian Wood led a delegation of county clerks asking the executive committee to think of the costs to taxpayers and the long lines at polling places created by voters going through pages of delegates.

“We’re the Republican Party, we’re supposed to be conservatives and look out for the tax dollar,” Wood said. “For us to put this type of option on the ballot and use the tax dollars to do so, I don’t feel we’re abiding what we’re standing for. Beyond the cost, the part that worries us the most is the long lines at the polling places. For every voter.”

The executive committee voted 92-12 to support new delegate selection process, though some committee members believe the party is making a strategic mistake by not giving voters registered as non-affiliated or independent a reason to ask for a Republican ballot in May 2020.

“My concern is giving voters another reason to cross over and vote in the Democratic primary,” said Charles Bolen, who is concerned about Manchin possibly choosing to run for governor in the primary. “We can deprive Joe of those conservative-leaning independents and prevent people from switching to the Democratic Party and voting for Joe if we give them a reason to vote on our end.”

The committee also voted to combine five resolutions all expressing support for Potter. At least one county had passed a resolution calling for Potter to resign, while deposed Wood County Republican Executive Committee Chairman Rob Cornelius is suing Potter and the West Virginia Secretary of State’s Office over his removal as chairman and as an elected county committee member. Potter said it was time to put inter-party drama behind and work together.

“We’ve got to all of us be together as a team,” Potter said. “Our jobs as members of the state executive committee and county committees is to get Republicans elected and re-elected all the way up and down the ballot, starting with re-electing our president, Donald J. Trump.”