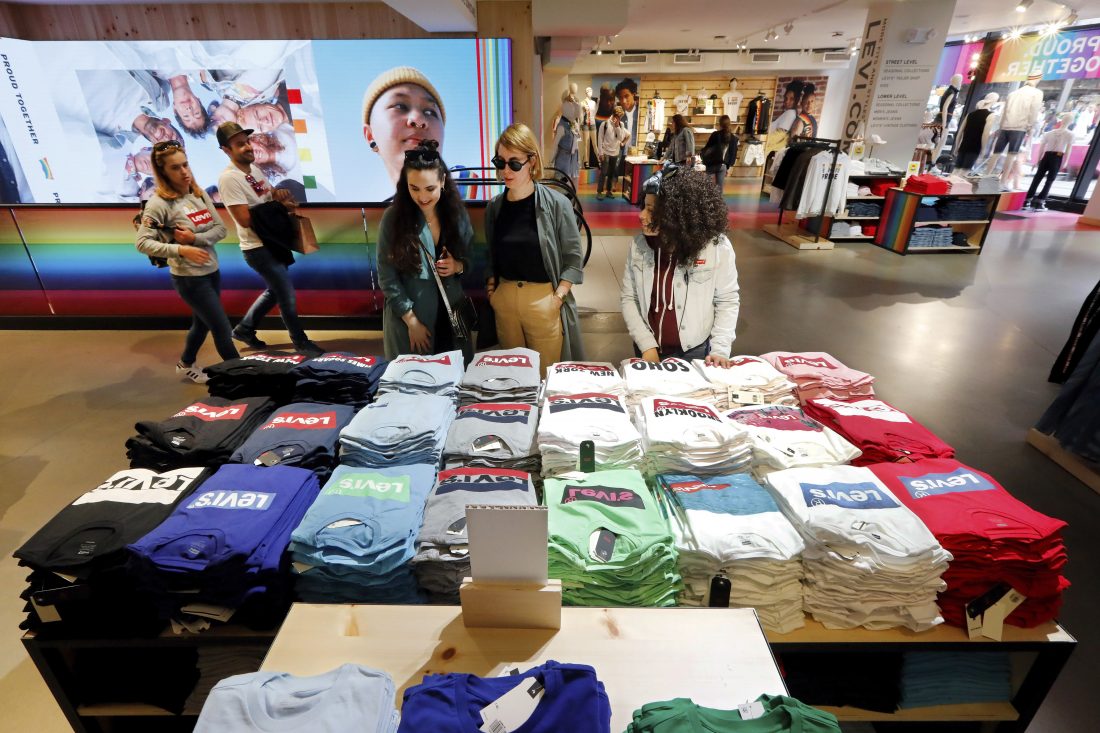 TRADE WAR FALLOUT — In this June 14 file photo, a pair of shoppers in the Levi’s store in New York’s Times Square, survey a T-shirt display. Manufacturers are facing stunted growth amid the damaging trade war between the U.S. and China, and that has some on Wall Street worried that it will crimp the consumer-fueled economy. -- Associated Press

NEW YORK — Consumers have supported the economy during its record-setting expansion, but a shrinking manufacturing sector, crushing tariffs and other dangers may bring the good times to an end.

Fresh warning bells rang on Wall Street earlier this month after factory output shrank for the first time in three years. That threatens the economy’s decade-long expansion, as it could lead to cuts in jobs and wages, undermining the U.S.’s consumer-led growth.

“Without any sort of catalyst to help turn the sentiment around we anticipate that continued weakness in the manufacturing sector is likely to bleed over into the consumer sector, which then can drag down the economy further,” said Peter Donisanu, investment strategy analyst at Wells Fargo Investment Institute.

“Businesses are holding back on spending because they’re worried about not knowing what the rules of the game are, related to trade, said Jason Pride, chief investment officer for private wealth at Glenmede.

Taken together, the data points to lagging demand that could eventually put a drag on consumer spending.

Signs of consumers’ anxiety have already begun to appear. Retail sales, excluding auto purchases, were flat in August, according to the Commerce Department.

Sales at restaurants and bars, an indicator of Americans’ discretionary spending, fell 1.2 percent last month, the steepest drop in nearly a year. Sales at grocery stores, clothing retailers and furniture stores also fell. General merchandisers, which include chain retailers such as Walmart and Target, reported a 0.3 percent drop.

Investors should keep a close eye on how the service sector, which makes up the bulk of the U.S. economy, reacts to the hurting manufacturing sector.

“We’ve seen cycles where manufacturing pulled back and services followed. When that occurred, we ended up in a more difficult economic environment,” Pride said.

For now the sector is holding up, even expanding at a stronger pace in August after two months of cooling.

For businesses and investors, much depends on how the trade feud between the U.S. and China plays out. The countries plan to meet in October to continue negotiations following months of escalating rounds of tariffs.

If the Trump administration’s tariffs on Chinese imports lead, as expected, to higher prices on everything from toys to clothing and shoes, it could undermine consumer confidence even further, weakening the economy’s last remaining support. Tariffs on many popular consumer items are scheduled to kick in on Dec. 15.