‘Something bigger than myself’: Weirton Madonna students hear of sacrifices made by veterans 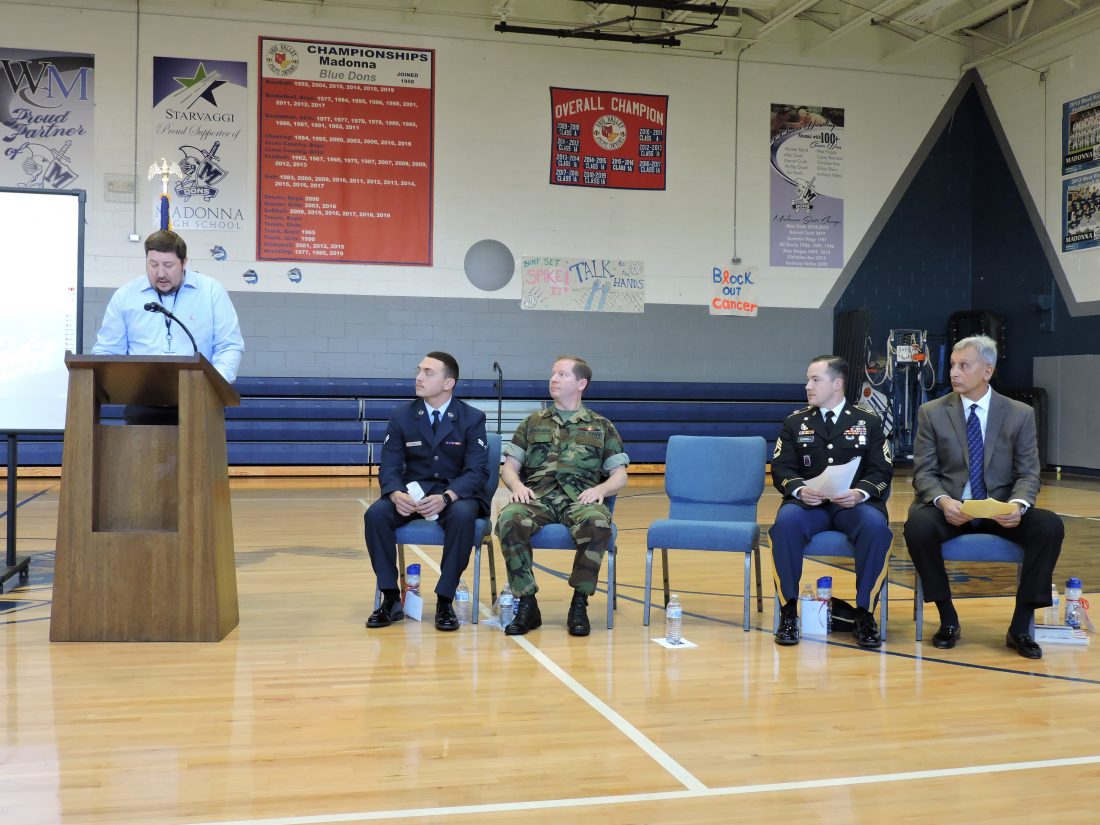 WEIRTON — As the nation prepares to honor its veterans, students at Weirton Madonna High School, Friday, heard directly from four area residents who have sworn to protect their country through service in the military.

“The sacrifice a lot for us,” principal Jamie Lesho explained to the students during the event’s welcome address.

Among those speaking Friday were veterans or active duty servicemen representing the Air Force, Navy, Army and Marine Corps. They included Airman First Class Phillip Good; the Rev. Dennis Schuelkens Jr., who holds the rank of petty officer second class in the Navy; Army Sgt. First Class J.M. Gorrell; and Joe DiBartolomeo, a retired brigadier general who has served in both the Army and Marines.

Good noted the tradition of military service in his family, explaining he is the fourth generation to serve, and initially was inspired to serve while 10 years old when his father took him on an refueling trip on a KC 135 aircraft.

“It was in that moment I knew I wanted to do something bigger than myself,” Good said.

That feeling was reinforced following the Sept. 11, 2001 terror attacks.

Schuelkens spoke on perspective and gratitude, explaining each of the students will find themselves going down different paths in life, with some heading to college, some to a trade school and others into the military.

He said those who select college, will probably have a few roommates, live in a dorm or apartment and have a relatively comfortable lifestyle and freedom. It won’t be the same for those in the military.

“While you’re doing that, there are others who will step up, raise their hand, and take that oath,” he said. “They won’t know where they’re going.”

He explained military training enforces the importance of conduct, responsibility, teamwork and attention to detail.

Gorrell, who took a moment to recognize any other veterans in the audience, currently serves as a recruiter for the Army.

He spoke of the importance of and differences between Veterans Day and Memorial Day, and told what he called his Army story, which he said started his freshman year of high school with the Sept. 11 attacks.

“I knew I had to do something to change what I saw on television,” he said.

He said while he met recruiters from different military branches, the Army was the only one to follow up with him, with a recruiter even visiting his home. It was during that visit both he and his twin brother decided to enlist with a goal of becoming combat medics.

After a few years, he decided to transition into the Army Reserves in order to attend college, going to school to become a veterinary technician. He found he missed active service, though.

“I missed the military,” he said. “Doing it one weekend a month wasn’t enough.”

He also noted the importance of having support from family.

DiBartolomeo served three years in the Marines near the end of Vietnam, before attending college and enrolling in the ROTC program and then serving 33 years in the Army.

He encouraged the students to consider military service, or to at least challenge themselves and get out of their comfort zones.

“There are a lot of options out there,” he said, adding there are just as many opportunities for women to serve as men.

He also reminded the students not to romanticize war, telling them to remember it is brutal.