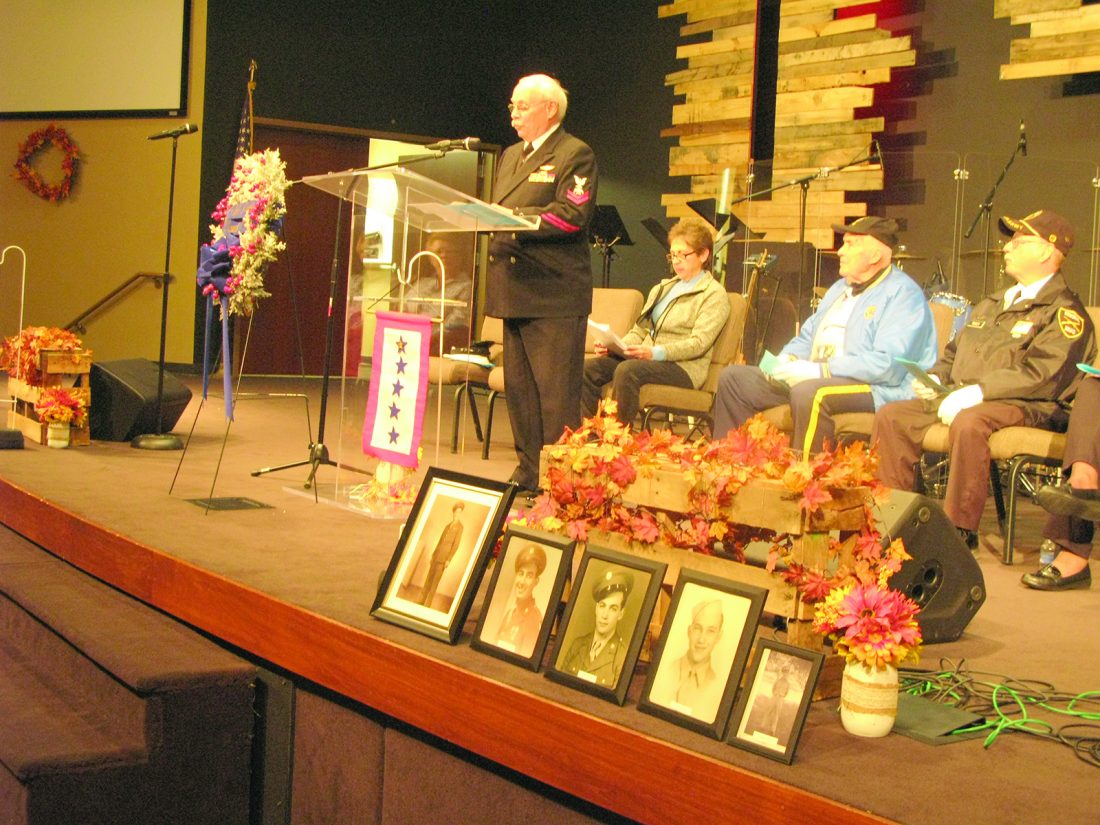 RECOGNIZED — Jim Brockman, executive director of the American Defenders of Bataan and Corregidor Museum and Education Center and a Navy Vietnam War veteran, said veterans of all eras, including wars and peacetime, should be recognized for their service during the Veterans Day service held by the Brooke County Veterans Memorial Park Foundation. Placed at the foot of the stage at Brooke Hills Free Methodist Church were photos of members of the Lauck and Viola families, who were recognized for their military service. -- Warren Scott

WELLSBURG — As guest speaker for the Veterans Day service held by the Brooke County Veterans Memorial Park Foundation, Jim Brockman noted former president Ronald Reagan said, “Some people live an entire lifetime and wonder if they have ever made a difference in the world. A veteran doesn’t have that problem.”

A Navy veteran who served three tours of duty in Vietnam, Brockman said veterans who served in all eras, in wars supported by the public and those that were not and in times of peace, should be recognized for their dedication and sacrifices.

Whether they enlisted or were drafted, all became part of a brotherhood of servicemen and women who did their best to serve their country, Brockman said.

He recalled recently meeting a fellow Vietnam War veteran who related how he strives to help his fellow veterans. The conversation ended with the veteran reflecting on his military service and concluding, “You know something? I’d do it again.”

“Many veterans will tell you the same thing,” Brockman told those attending the service held at Brooke Hills Free Methodist Church.

As moderator, foundation member Donna Sullivan said those who haven’t served in the military can’t fully appreciate what veterans have experienced.

Sullivan said her father, Bart Taibi, didn’t often speak of his service during World War II but once commented on his initial introduction to combat, saying, “When they handed me the gun, I wanted to cry.”

She said her father knew a time may come when he, a young man, would be faced with killing another person.

In recent years the foundation has recognized local families with multiple immediate members who served, with two families honored at each Memorial Day and Veterans Day service.

On Monday the group paid tribute to the following members of the Lauck and Viola families:

• the late George Robert Lauck, a World War II Army veteran who after being wounded in combat in Florence, had a 14.2 ounce chunk of shrapnel removed from near his spine.

• the late Earl Lauck, an Army staff sergeant during World War II who was held captive by enemy forces for five hours near the Bridge of Remagen.

• James Lauck, an Army sergeant first class who received several honors for his service in the Korean War.

• the late Harry Lauck, an Army specialist who was killed in the line of duty during the Vietnam War.

• Howard Lauck, who served as a military police officer at Fort Meade during the Vietnam War.

• the late Isadore Viola, a World War II veteran who was serving as a gunner aboard a B-17 bomber when it was shot down over France but evading capture, was later rescued by American troops.

• the late John Viola, an Army marksman and truck driver who served in the Rhineland region of Western Germany, France and Belgium during World War II.

• the late Joseph Viola, an Army private who participated in the Normandy Invasion and was killed in the Battle of the Bulge.

• the late Tony Viola, who served in an antiaircraft artillery search battalion of the Army Air Corps during World War II, during which he contracted malaria.

• the late Thomas Viola, an Army marksman and mechanic who served in Central Europe during World War II.

Sullivan noted plaques honoring the families will be displayed at the museum, which is within the Brooke County Public Library.

Also participating in the service were members of the Brooke High School Choir, the Ohio Valley Veterans Memorial Squad, Katy O’Connell, who delivered a reading on the meaning of a veteran; and Sam Taibi, who offered prayers.