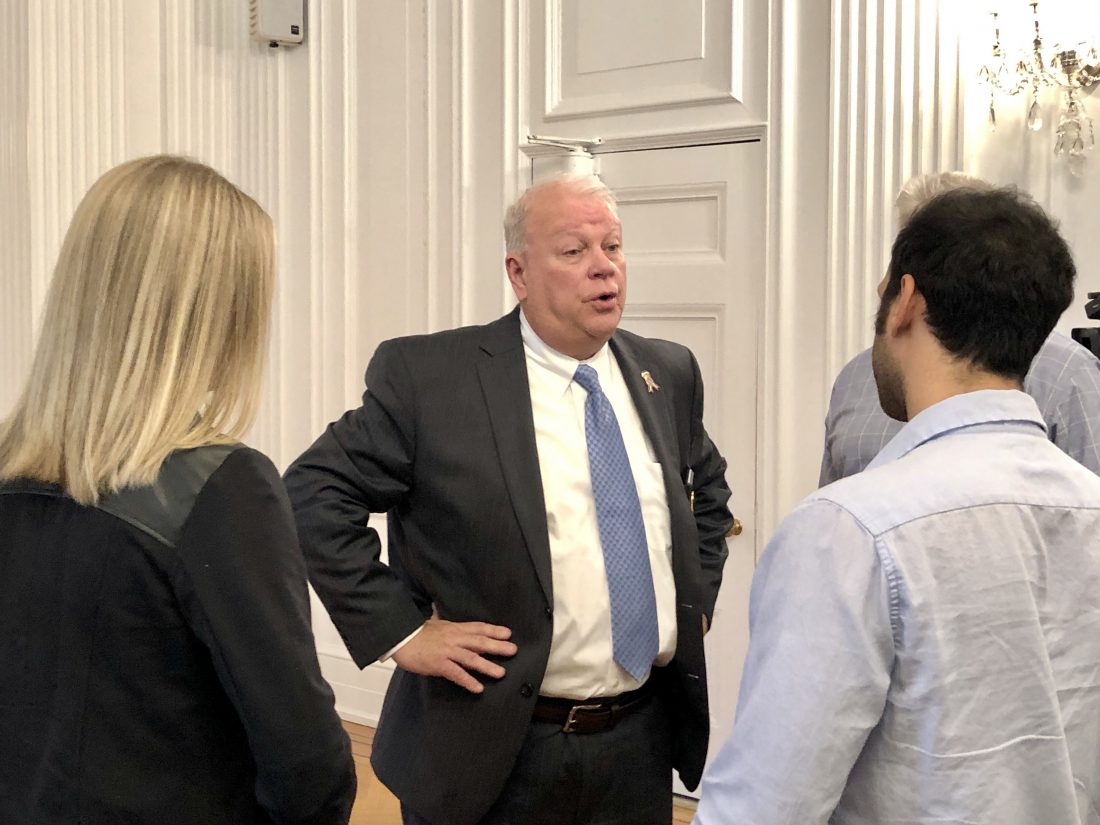 CHARLESTON — The governor and the cabinet secretary for the Department of Military Affairs and Public Safety Friday addressed the fallout from a controversial photo showing graduates of the state’s Corrections Academy apparently giving a Nazi salute.

A class photo showing Basic Training Class No. 18 hands outstretched in a salute now associated with Nazis and fascism was released by the Department of Military Affairs and Public Safety on Thursday.

The photo shows 34 graduates, who trained at the Corrections Training Academy in Glenville from Oct. 21 to Nov. 27, with arms raised with open hands or closed fists. While the department blurred the faces of the graduates, most appear to be white and a few appear to be black.

“We do condemn these actions in every way, shape, form or fashion,” Gov. Jim Justice said during a press conference Friday.

“First and foremost, this is intolerable to every single breathing human being within this state…not only are we not going to tolerate it, (there’s) got to be dismissals, terminations and we’re moving through the process as expediently as we possibly can.”

A caption above the photo, which includes the state seal and the seal of the Division of Corrections and Rehabilitations, said “HEIL BYRD!,” referring to training instructor for the division.

Department Secretary Jeff Sandy would neither confirm nor deny the “BYRD” being referenced was Karrie Byrd, an employee with the Division of Corrections and Rehabilitations.

According to the department, an investigation was opened after Thanksgiving by the department’s inspector general. That investigation is more than 99 percent complete after 51 interviews with division staff, and a final report will be delivered to Justice by Christmas.

In a memo sent to all employees of the Division of Corrections and Rehabilitations on Wednesday, Sandy said a number of employees had been suspended for their part in the photo. As of Friday, two instructors, including the one who took the photo, and one student have been fired.

“They were employees that had been with the state and based on the West Virginia Division of Personnel guidelines, their conduct in the training of that class warranted immediate termination,” Sandy said.

Sandy said 34 of the graduates have been suspended without pay, with suspension letters put in their files. Sandy said the department’s attorneys were reviewing Freedom of Information Act requests for an uncensored version of the photo, but that would not be released while the investigation is ongoing.

Sandy also said the identities of the academy class would not be released at this time.

“Our legal team has been working on this matter. We’re allowed by law to balance public safety versus releasing the identity of those,” Sandy said. “We are concerned about potential threats to these individuals from other groups, so that is why we’re talking with an abundance of caution.”

There is also concern about this photo following the graduates should any of them continue on to jobs in the state’s regional jails, prisons and juvenile facilities. A U.S. Supreme Court decision requires any derogatory information contained in a police or correctional officer’s file be disclosed to defense attorneys upon request.

“Every time an officer would be required to testify in court or if an incident occurred, our government would be required to hand over that picture in our investigative report to the judge and the defense attorney,” Sandy said. “That would be extremely detrimental to the prosecution of any type of case.”

In 2017, Justice declared a state of emergency over staffing shortages in West Virginia’s prison and jail system, including using the West Virginia National Guard to fill shortages.

Since then, the Legislature raised the base pay of correctional officers to $28,664, which will increase to $30,664 on July 1. Officers who work one year are eligible for promotion and a 7-percent pay increase.

It was under Adolph Hitler and the Nazis whereby the salute became associated with anti-semitism and the Holocaust, where 6 million Jews were murdered in camps. The salute today is associated with neo-Nazi hate groups which often find homes in the U.S. prison system. According to the Southern Poverty Law Center, the largest of these groups – the Aryan Brotherhood, has nearly 20,000 members. Sandy said that correctional officers are educated on how to recognize white supremacist groups.

Rabbi Joshua Lief of Temple Shalom in Wheeling represents one of the largest Jewish congregations in the state. Lief said the photo needs to be used as a training and education moment to ensure such a photo never happens again.

(Adams can be reached at sadams@newsandsentinel.com.)