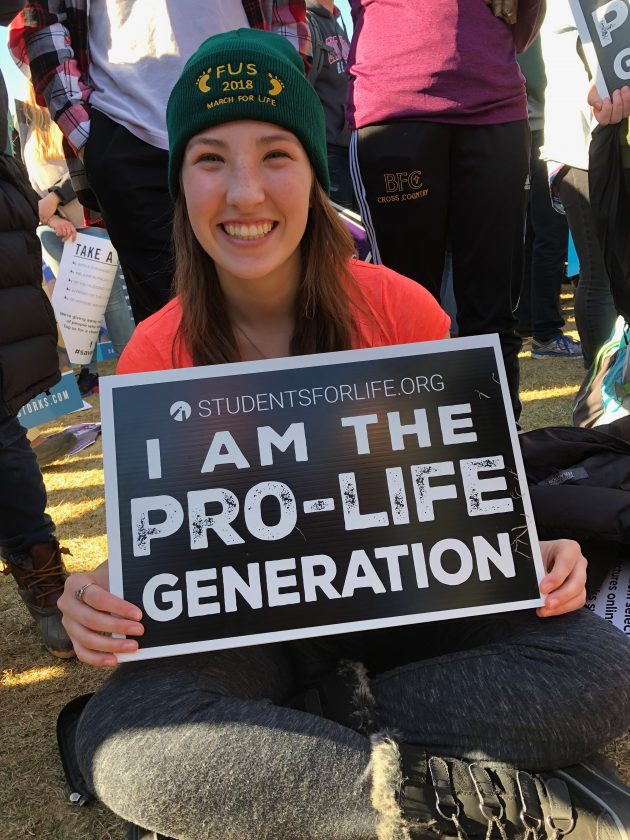 PARTICIPATION — One of the hundreds of Franciscan University of Steubenville students who attended the 2018 March for Life in Washington, D.C. -- Contributed

STEUBENVILLE — The Students for Life Club at the Franciscan University of Steubenville is organizing the university’s annual pilgrimage to Washington, D.C., for “Life Empowers: Pro-Life Is Pro-Woman,” the 47th March for Life on Jan. 24.

Eight buses with nearly 500 university students will arrive in the nation’s capital Jan. 24.

Hundreds of additional students, alumni, and other members of the university family will drive to Washington and meet up with the students under the iconic green university banner on the National Mall for the noon rally and the march up Constitution Avenue to the Supreme Court and Capitol Building.

Leading them will be the Rev. Dave Pivonka, TOR, the university’s president, who will attend the narch just as he did when he was a student at the school in the 1980s.

“When God created woman, he gave her the special gift of carrying new life within her,” says participant Moni Desmond, a senior theology and catechetics major. “Franciscan inspires women to bring Christ into the world in everything they do. As a woman, I know that my role in the pro-life movement is a powerful one that is celebrated at Franciscan.”

The Steubenville contingent is completely student-led and organized, said Kyle Taggart, a junior and president of Students for Life.

“Considering the gravity of the abortion issue — the biggest human rights violations in human history — we have a serious obligation to do everything in our power to fight legalized abortion,” says Taggart. “Everyone has a different vocation in the pro-life movement, but this is something that every Franciscan University student can do, regardless of their major.”

As they do each year, the university’s students will begin their trip with a 10:30 p.m. Holy Hour in Christ the King Chapel. Buses then depart the university at midnight and are scheduled to arrive in Washington in time for the stuents to attend Mass at the Basilica of the National Shrine of the Immaculate Conception at 7:30 a.m.

Afterward, some university students will also share their pro-life views with congressional leaders from their home states.