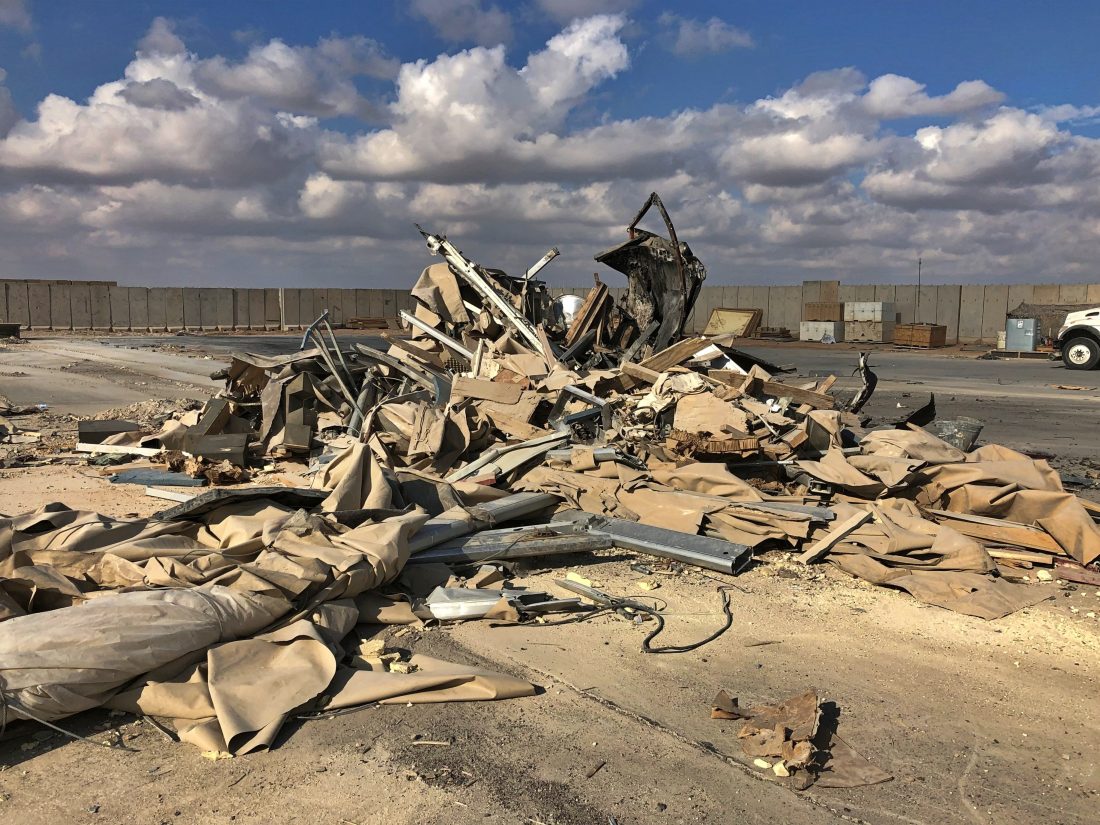 RUBBLE — Rubble and debris are seen at Ain al-Asad air base in Anbar, Iraq, Monday. Ain al-Asad air base was struck by a barrage of Iranian missiles on Wednesday, in retaliation for the U.S. drone strike that killed atop Iranian commander, Gen. Qassem Soleimani, whose killing raised fears of a wider war in the Middle East. -- Associated Press

AIN AL-ASAD BASE, Iraq — American troops were informed of an imminent attack hours before a barrage of Iranian ballistic missiles struck a key Iraqi airbase hosting their forces, U.S. military officials said on Monday, days after the attack which marked a major escalation between the longtime foes.

At 11:00 p.m. on Jan. 6, U.S. Lt. Col. Antoinette Chase gave the order for American troops at Ain al-Asad air base, in western Iraq, to go on lockdown. Military movements froze as her team, responsible for emergency response at the base, sent out alerts keeping them up to date about the incoming threat. At 11:30 she gave the order to take cover in bunkers.

The first strike landed sometime after 1:35 in the morning, and the barrage continued for nearly 2 hours.

“The reason why we pushed it at 2330 is because at that point in time all indications pointed to something coming,” she told reporters at the base.

“Worst case scenario we were told was it’s probably going to be a missile attack. So we were informed of that.”

The Iranian attack was in retaliation for the U.S. drone strike near Baghdad airport that killed a top Iranian commander, Gen. Qassem Soleimani, prompting angry calls to avenge his slaying.

An Associated Press crew touring the Ain al-Asad base Monday saw large craters in the ground and damaged military trailers as well as forklifts lifting rubble and loading it onto trucks from a large area the size of a football stadium. U.S. soldiers inspected portable housing units destroyed and burned by the missile attack.

The air base in Iraq’s western Anbar province is a sprawling complex about 110 miles west of Baghdad shared with the Iraqi military and housing about 1,500 members of the U.S. military and the U.S.-led coalition fighting the Islamic State militant group.

It was struck by Iranian missiles on Wednesday in Iran’s most direct assault on America since the 1979 seizing of the U.S. Embassy in Tehran. The proxy attack raised fears of a wider war in the Middle East although both sides have since indicated that they don’t seek further retaliation, at least in the short term.

The U.S. said no American soldiers were killed or wounded in the Iranian attack.

“There were more than 10 large missiles fired and the impact hit several areas along the airfield,” said Col. Myles Caggins, a spokesman for the U.S.-led coalition fighting Islamic State militants in Iraq and Syria. He added that the explosions created large craters, knocked over concrete barriers and destroyed facilities that house dozens of soldiers.

One of the missiles hit near an airstrip where six drones were parked, causing no damage.

Although no soldiers were killed, he said several were treated for concussions from the blast and are being assessed by professionals. Caggins added that troops received notification the missiles were on their way thanks to early warning systems, and troops were moved out of harm’s way. He described soldiers who lived through the attack as “warriors.”

The Ain al-Asad air base was first used by American forces after the 2003 U.S.-led invasion that toppled dictator Saddam Hussein, and later saw American troops stationed there amid the fight against the Islamic State group in Iraq and Syria.

President Donald Trump visited the sprawling air base in December 2018, making his first presidential visit to troops in the region. Vice President Mike Pence has also visited the base.

On Monday, most soldiers walked around the base without wearing any body armor, amid the area’s large tents and street signs written mostly in English. The base is ringed by large concrete barriers.

Chase said troops had conducted a drill on something similar the week prior to the attack and that they had received some warnings earlier in the day.

“I had zero casualties and everybody is alive to tell the tale. So as far as I’m concerned, I couldn’t be happier and I couldn’t be prouder of the actions that the soldiers and the coalition forces took that night,” she added.