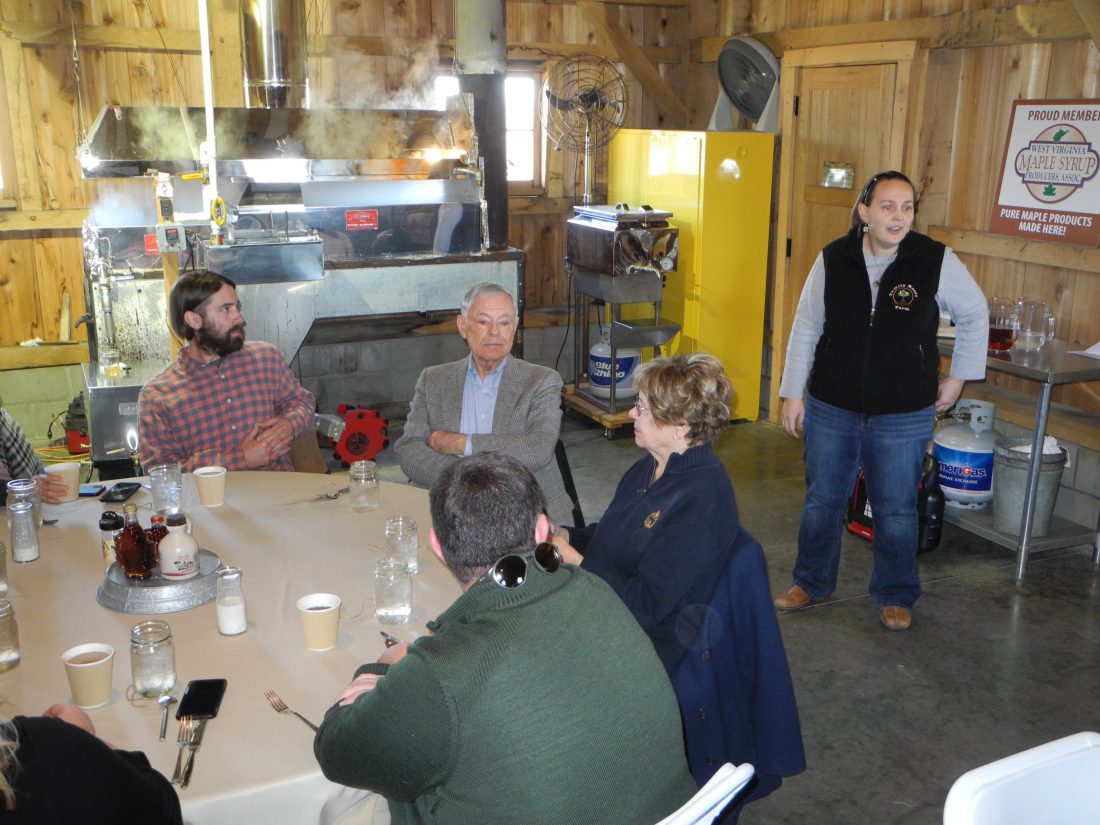 EDUCATIONAL BRUNCH — Britney Farris of Family Roots Farm describes the production of maple syrup to visitors attending a brunch held there Saturday as part of West Virginia Maple Days, a promotion of the state’s maple farms. (Photo by Warren Scott)

WELLSBURG — Visitors to Family Roots Farm on Saturday learned the journey taken by sap water in becoming maple syrup, sugar and other products as they enjoyed meals incorporating the sweet substance in unique ways.

Fred and Cathy Hervey and their daughter and son-in-law, Charlie and Britney Farris, have been working to promote farming and farms as a destination for tourism.

It was in 2015 when they decided to turn the maple syrup they had been producing for themselves into a family business in 2015.

Britney noted Charlie was unable to attend Saturday’s event because he was among many farmers selling their product at the Winter Blues Market in Charleston.

The family has brought their maple sugar and syrup to international conferences of the North American Maple Syrup Council in Pennsylvania and New Hampshire, where they have received several awards; as well as the shelves of several area businesses.

Each year the Herveys join many other West Virginia farmers and businesses in participating in Mountain State Maple Days, an event promoted by the West Virginia Maple Syrup Producers Association and continuing on March 31.

On that date Family Roots Farm will hold a Maple Family Adventure, with an interactive tour of the farm and other activities as well as maple snacks; and later that day, maple dinner for adults.

The cost is $10 per family for the Maple Family Adventure and $65 per person for the dinner. Reservations are required and should be made by emailing familyrootsfarm@outlook.com for the family event and farmharvestfeastwv@gmail.com for the dinner.

The visitors were warmed by the heat from the large wood-fired evaporator used to convert sap water from the farm’s maple trees into syrup.

Britney noted it takes 50 gallons of sap water to produce one gallon of syrup. Heated at 7 degrees above boiling, the sap water can burn very quickly, so two people man the evaporator, Fred noted.

He said while the family once collected the sap water in bags and buckets, they now channel it through a system of pipelines to a storage tank inside the building.

Britney said the sap water “can be held up to 7 days but the sooner you boil it, the better the quality.”

Fred said with nearly 1,000 taps to trees on the farm, the pipelines are much more efficient, but he and others still need to check the taps regularly to ensure they are in place.

Like most farmers, the Herveys must guard their produce against wildlife – in this case, squirrels and deer that will try to tamper with the taps to consume the sap water.

“I like to walk the trees twice a day to make sure everything is good,” Fred said.

He said the best weather for sap water is cold nights followed by warm days because it allows the sap water to flow more freely.

As brunch was served, Britney noted the coffee was made with maple-coated beans provided by the farm to Aromas of the Andes, a Linn, W.Va. company.

She said most coffee advertised as maple is artificially flavored, which also is true of many pancake syrups.