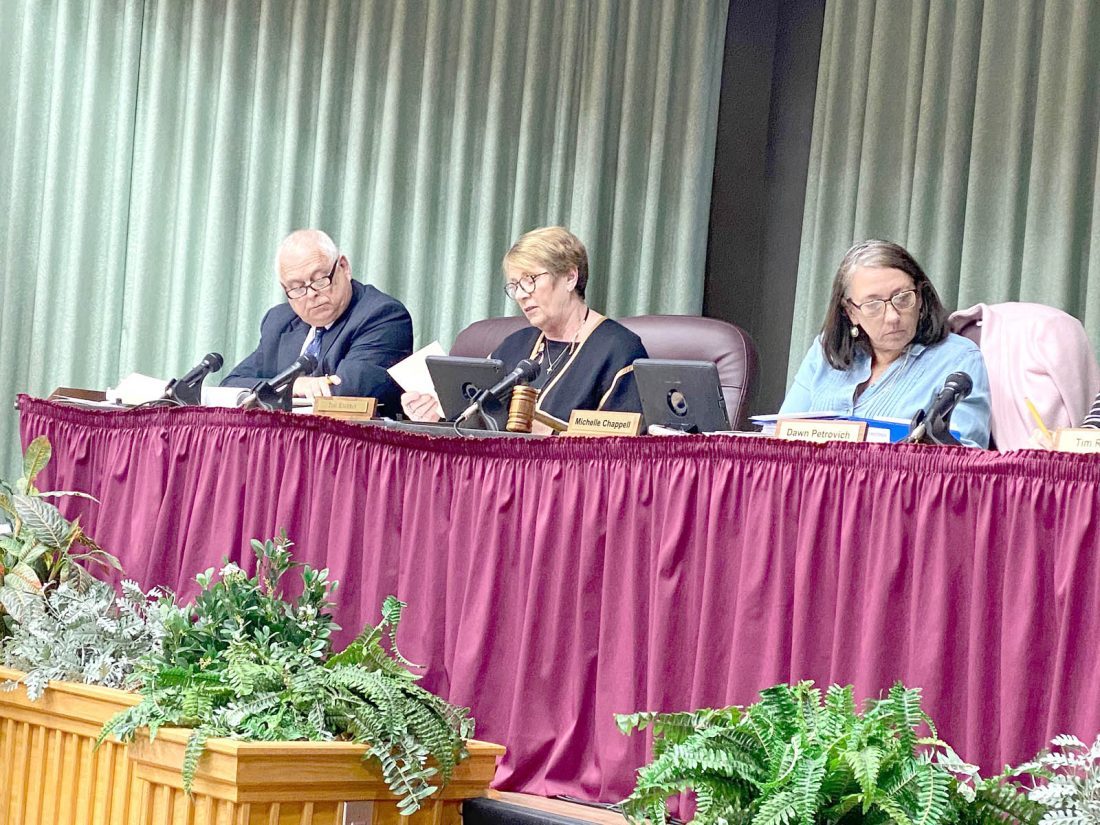 SEAT BELTS AN ISSUE — Hancock County Board of Education member Toni Hinerman, middle, reads a letter submitted to the board as member Danny Kaser and board President Michelle Chappell listen. -- Julie Riedel

The letter was submitted by her brother-in-law, Ray Hinerman. He was inspired to submit the letter to each board member following a traffic accident in Ohio involving a bus. Ray Hinerman acknowledged seat belts are not required on buses in the state, but he asked the board to look into adding them to ensure the safety of students.

Danny Kaser, board member, requested the board send Ray Hinerman a letter acknowledging they received his communication. Kaser also asked Chris Enochs, transportation director, to research the topic and to discuss it further at a later meeting. He reported there have been conversations during the years about adding seat belts to buses.

Enochs said it’s a national debate, and school buses are built to be the safest vehicles on the road. He reported some of the concerns about seat belts on buses involve fires and crashes into water. Enochs said he will look into the pros and cons of adding seat belts.

The National Highway Traffic Safety Administration leaves the decision to require seat belts up to each state, and according to the 2018 fact sheet for the National Association of State Directors of Pupil Transportation Services, eight states have laws detailing school bus seat belt rules. The West Virginia Board of Education reviewed the state’s school bus policy during its Jan. 8 meeting and chose to not require seat belts. Hancock County can add seat belts if the district decides it will ensure student safety.

In other action, the board:

¯ Joseph Campinelli, chief financial officer, gave an update on the school system’s finances for the current school year. Campinelli reported tax revenue is at 63 percent, and he expects that to jump during the next month because of tax collections. The school system’s interest revenue also is at 95 percent, with an approximately $30,000 in surplus interest collection. Campinelli reported the district utilized opportunities and spent on projects not originally in the budget, including additional concrete and paving as well as a new public address system for the schools.

¯ Michelle Chappell, board president, announced the state auditors will be at the school during the week for the district’s audit. Chappell also announced she was re-nominated for the Region 6 coalition. She added the state Legislature is moving forward with this year’s session and they should watch for alerts about bills.

¯ Steve Govey, director of child nutrition, provided the board with an update on the district’s nutrition program. Govey reported the students are getting used to the share cart system, they now have four to five different apples to select from, and he is still working to use fewer processed foods. Govey also reported he is working with West Virginia University Extension Office to start pop-up farmer’s markets to introduce new produce to students, he said that program should begin in the fall.

¯ The board encourages residents to participate in the ongoing broadband study, a link to the survey is on the school district’s website and paper copies are available in the libraries.

¯ Approved the hiring of Austen Whitacre as a countywide substitute bus operator.

¯ Approved the list of bills included in their packet.

¯ Approved the expulsion of two students.

¯ Approved the release of a student, effective Feb. 18.

There will be a proposed levy rate meeting at 4:45 p.m. with a regular meeting following at 5 p.m. on March 9.