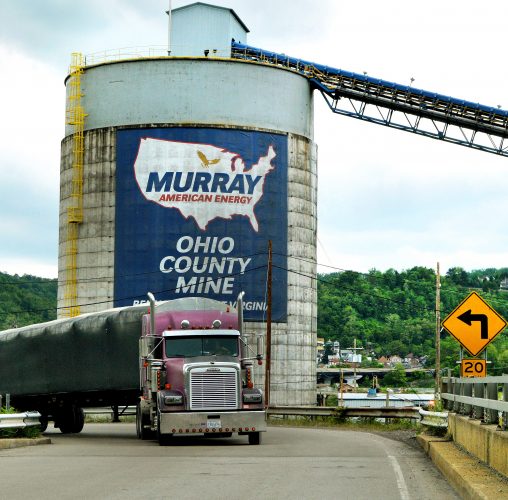 LOOKING FOR RELIEF — A tractor-trailer pulls away from Murray Energy’s Ohio County Mine in Benwood. -- Staff photo

ST. CLAIRSVILLE — Murray Energy Corp. wants the federal government to take over health care payments to its retirees as the company continues to navigate the bankruptcy process.

The St. Clairsville-based company — the largest privately-owned coal producer in the nation — asked the federal judge overseeing its bankruptcy case to relieve it from its retiree health care obligations in a motion entered Monday.

The company cited a lack of cash-on-hand and a potential default on payments to its lenders as reasons for making the request.

According to the motion, Murray has about $6 million in available cash. Interim relief from the health care paymentswould save the company about $200,000 per day, it states.

If the relief is not granted, the company states, it likely will be forced into “value-destructive enterprise-wide liquidation” that would leave “no business to restructure and no go-forward employment opportunities for thousands.”

According to the filing, the company would transfer union retirees from the Murray Energy Corp. Individual Employer Plan to a 1993 Plan and would ensure there is no gap in benefits for retirees. Under legislation passed by Congress in December, the U.S. Treasury would take over those payments, meaning that retirees’ benefits would not be impacted.

This move would increase liquidity for the company as it works to restructure and sell its assets to a “stalking horse” bidder, Murray NewCo, that was created for that purpose.

In its court documents, Murrays says a variety of factors have made the bankruptcy process more difficult than anticipated when the case was filed in October. Among those are excess domestic coal supply and a decline in prices, a continued transition to more renewable sources of energy, low natural gas prices, a warmer-than-expected winter and the onset of the novel coronavirus pandemic.

United Mine Workers of America President Cecil Roberts said the legislation passed in December would pertain to almost 12,000 union retirees. He also said Murray was in nearly the same position in 2016, but was able to renegotiate terms with many of its lenders following a new contract agreement with the UMWA.

Since then, he said, Murray has paid a total of $231.7 million in retiree health care, along with $118 million in health care for active workers. The company also has paid hundreds of millions in wages and pensions, for a total of $1.1 billion in obligations to employees and retirees.

“The good news is all retirees (11,600 of them) won’t lose health coverage,” he said, noting the federal government will pay for those benefits.

Messages to Murray Energy seeking comment on Thursday were not immediately returned.

Murray Energy produces about 76 million tons of coal annually and holds 3 billion tons of coal reserves in seven states and in Colombia, South America. The company employed as many as 7,000 people at one time, including miners who work in the tri-state area.