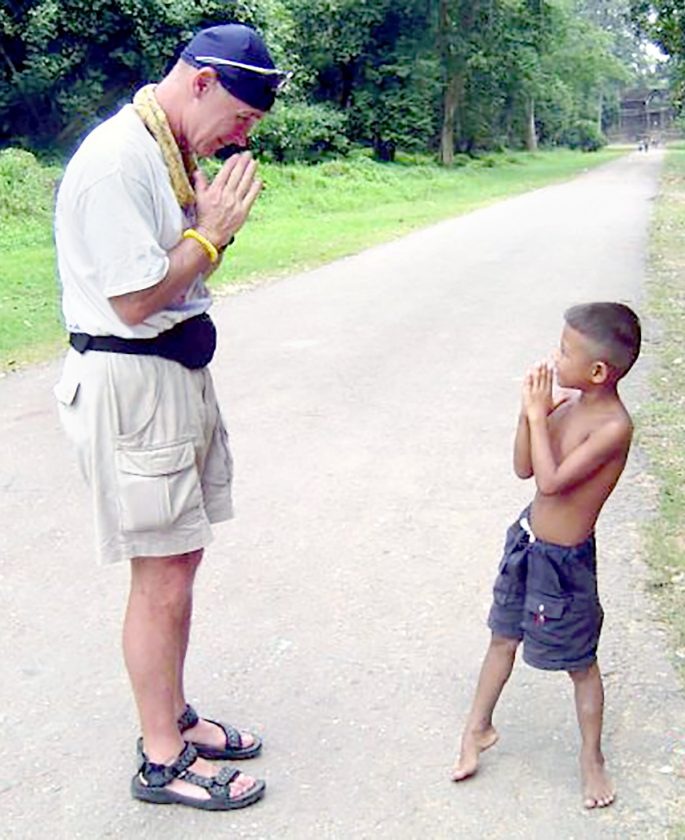 GREETINGS — Vietnam veteran Ron Woloshan shares a greeting of “peace” with a young boy during a 2008 visit to Cambodia. This was at the entrance to Angor Wat. -- Contributed

WHEELING — Fifty years ago this month, Ron Woloshan was sitting atop a tank in Cambodia when he learned of the Kent State shooting in Ohio that killed four students.

Ironically, the news came a week after he had written a letter to his father in which he made note of the college students back home who were protesting the Vietnam War. In his letter, he also expressed his feelings that he was doing the right thing by serving in that highly protested war. He wrote that he was 24 going on 40 and that he was “an old man compared to the teenagers around me.”

“I scribbled that letter several days before we received the news in the Stars & Stripes military newspaper, usually coming a week late in the field, of the Kent State shootings on May 4th … right after I had just mentioned in my letter those crazy kids demonstrating back home,” Woloshan said.

At that time, Woloshan had no idea how much the Kent State shooting would come back into his life and affect his thinking about Vietnam.

Woloshan, who was born and raised in Ambridge, Pennsylvania, returned from his military duty and eventually settled in Wheeling. But much occurred in his life before he settled down to raise a family. His tour of duty in Vietnam was from July 1968 to July 1970 — his first 20 months with the 1st Infantry Division in the Michelin Rubber Plantation, and the last four months with the 25th Infantry Division in Cambodia.

“I got to experience and see much more of Vietnam and Cambodia than most since my ‘responsibility’ as a communications chief/observer moved me about a good bit. That experience included how much the women and children of a war theater endure and suffer … the real heroes in a war,” said Woloshan, now 73.

Vietnam veterans did not experience a warm welcome home from many U.S. citizens who opposed the war. It was an unsettling time for those veterans who found it a challenge to re-enter the civilian life. So Woloshan bought a car and spent a year traveling the country, visiting veteran friends and sleeping on beaches.

When his money ran out, Woloshan came back to the Ohio Valley, finished his college work and got a job with Pittsburgh Steel. He then moved to Wheeling after the Wheeling-Pitt merger in 1971. Through his work, he met his wife Marcie. They have lived in Wheeling for 50 years. They raised three children and have six grandchildren.

Woloshan later took a position with IBM, selling and managing/migrating large operational and business functions to India, China, SE Asia and South America. After semi-retiring, he and Marcie visited more than 75 countries, including a return to Vietnam. He was in awe of the changes to the land he only knew as a battlefield.

However, it was in 1992 when he took his oldest son on a college visit to Kent State that the memories of Vietnam and the campus shooting came rushing back.

“As we awaited our tour facilitator, I asked several people at the admissions desk where the Kent State ‘massacre’ occurred. None at the desk knew, but they found one ‘older lady’ who had been at the school during the demonstrations,” Woloshan recalled. ” She came up and was so polite, asking why the interest, and I shared my story. She directed us to what was then a very remote and unused part of the campus.”

After some searching, Woloshan found a small brass memorial covered by bushes that told the story of May 4, 1970. Woloshan described the site: “Adjacent to and just behind the brass memorial was a fenced in area the size of a little league field. Gently sloping hillside covered the perimeter and it was easy to see how intimidating a thousand plus students would be to 60 National Guardsmen, most who had never fired a weapon before. Why their general had them locked and loaded with the safety off was beyond comprehension for me.”

The visit to Kent State and again to Vietnam in peacetime proved cathartic for Woloshan. He lamented the loss of lives in the war and on the college campus, feeling a kinship between the two.

Recently Woloshan began writing his autobiography and shared many of his wartime memories and thoughts with 24 longtime friends and veterans. He felt validated in his memories when he heard back from 22 of them, although opinions have changed.

“One thing is for certain, I see things a bit differently now than when I penned that letter. I was most certainly wrong in my assessment that ‘we were doing the right thing.”‘