Daily coronavirus deaths on the decline, but scientists warn of reversal 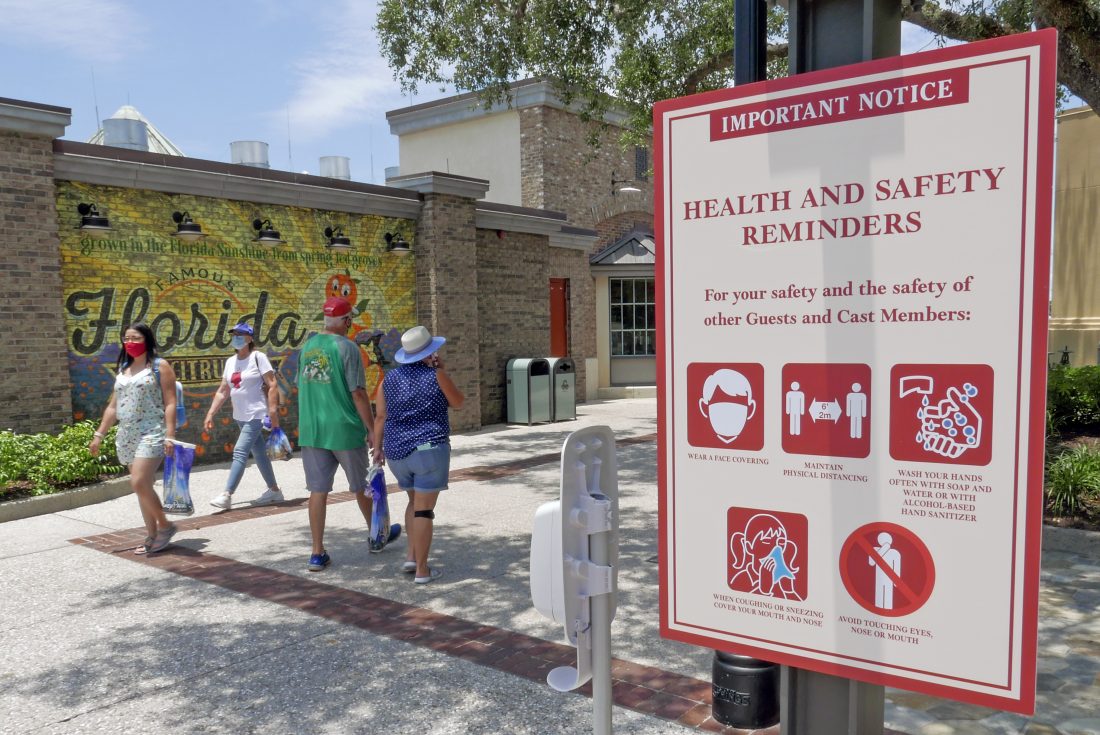 FILE - In this June 16, 2020, file photo, signs remind patrons to wear masks and other protocols because of the coronavirus pandemic as they stroll through the Disney Springs shopping, dining and entertainment complex in Lake Buena Vista, Fla. The number of deaths per day from the coronavirus in the U.S. has fallen in recent weeks to the lowest level since late March, even as states increasingly reopen for business. But scientists are deeply afraid the trend may be about to reverse itself. (AP Photo/John Raoux, File)

The number of deaths per day from the coronavirus in the U.S. has fallen in recent weeks to the lowest level since late March, even as states increasingly reopen for business. But scientists are deeply afraid the trend may be about to reverse itself.

“For now, it’s too soon to be reassured that deaths are going down and everything’s OK,” said Dr. Cyrus Shahpar of Resolve to Save Lives, a nonprofit organization that works to prevent epidemics.

Deaths from COVID-19 across the country are down to about 680 a day, compared with around 960 two weeks ago, according to an Associated Press analysis of data compiled by Johns Hopkins University. The analysis looked at a seven-day rolling average of deaths through Wednesday.

A multitude of reasons are believed to be at play, including the advent of effective treatments and improved efforts at hospitals and nursing homes to prevent infections and save lives.

But already there are warning signs.

For one thing, the number of newly confirmed cases per day has risen from about 21,400 two weeks ago to 23,200, the AP analysis found.

And in Florida, Georgia, Texas and Arizona — states that loosened their stay-at-home restrictions early — daily deaths have been quietly rising since early June, said Ali Mokdad, professor of health metrics sciences at the University of Washington in Seattle.

“These are not numbers. These are human beings,” Mokdad said. “We’re going to see a rise in deaths in many places in the United States.”

The outbreak has killed about 118,000 people in the U.S. and nearly a half-million worldwide, according to Johns Hopkins’ count, though the real numbers are believed to be higher. Potential vaccines are in early stages of testing, and it is unlikely any will be ready before early next year.

Experts note that a rise in deaths could take a while to show up in the U.S. statistics. Stay-at-home orders imposed in March, combined with the use of face masks and other social-distancing measures, have been bringing down the daily death toll since mid-April, and the U.S. as a whole is still seeing the positive effects, even though people are starting to work, shop and eat out again.

Doctors watching for an uptick in deaths will be on the alert for certain signals to emerge in a specific order, Shahpar said.

First, cellphone data will show people moving around more. Next, doctors will report more flu-like illnesses, and the proportion of people testing positive for the virus will rise. Hospitalizations will then go up and, finally, so will deaths.

Several factors are believed to be pushing the curves for deaths and cases in opposite directions.

Rising case numbers can partially be explained by the wider availability of testing. Mild cases, previously undetected because of limits on who could be tested, are now showing up in the numbers.

As for the drop in deaths, “it is probably several things happening at once,” said Dr. Shmuel Shoham, a professor of medicine at Johns Hopkins University School of Medicine. Lessons learned from the “awful early days” are now benefiting the severely sick and people in nursing homes, Shoham said.

It looks that way in Washington state’s King County, where the first nursing home outbreak in the U.S. killed 45 people at the Life Care Center in suburban Seattle. County data shows deaths in similar facilities declining over the past two months. And no single facility in the county has come close to the death toll at Life Care, which was struck unaware.

While it is unclear how much specific treatments may have contributed to the decline in deaths, doctors are trying antivirals such as remdesivir, plasma donated from people who have recovered from the virus and steroids such as dexamethasone, which grabbed attention this week with reports confirming it can save the lives of many of the sickest patients.

While all viruses mutate, scientists say the coronavirus so far is not changing in a way that has made it less deadly.

The decline in deaths this spring might well be tied in part to warmer weather as people spend more time outdoors where circulating air disperses the virus. But that does not bode well for the U.S. come this fall and winter.

Mokdad noted that deaths are on the rise in the Southern Hemisphere, where it’s now winter.

“This virus is going to have a second wave. It’s going to follow the pattern of pneumonia,” he said. “What we’re seeing in the Southern Hemisphere will be happening here.”