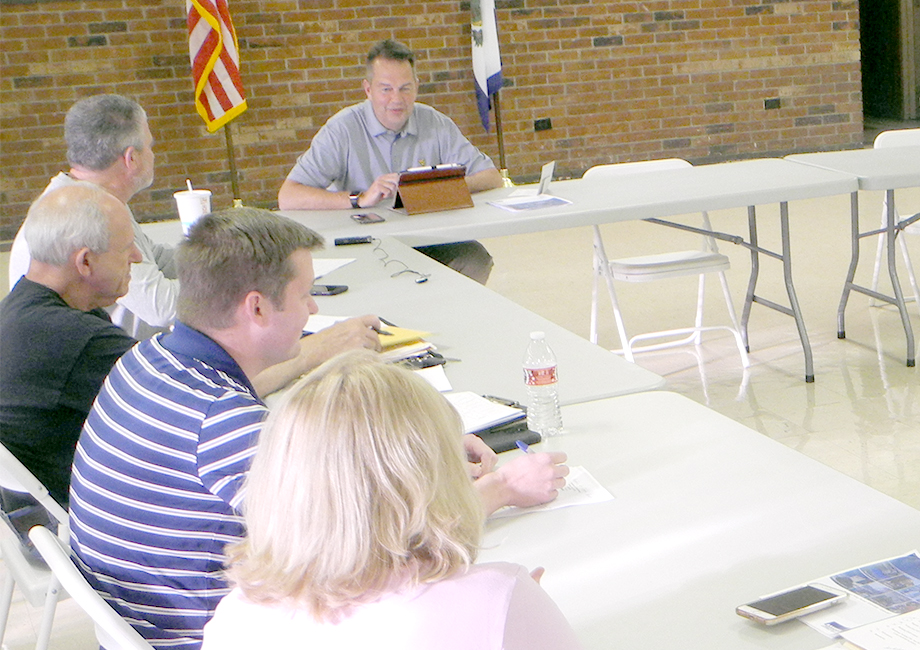 DISCUSSION — Follansbee City Council discussed various issues Monday, including disturbances caused by trucks using Jake brakes, as well as approving the hiring of staff for the city’s newly reopened parks and swimming pool. The meeting was held at the Follansbee Community House to allow for recommended social distancing. (Photo by Warren Scott)

FOLLANSBEE — The use of Jake brakes by trucks on Veterans Drive and the hiring of staff for the city’s parks and swimming pool were among matters before Follansbee Council on Monday.

City Police Chief Larry Rea said at council’s request, he looked into whether the use of Jake breaks by trucks can be prohibited on Veterans Drive and was told it can’t be because it is a state road. Rea added he learned the posted speed limit can be no less than 25 mph on the road. It’s currently 30 mph.

Third Ward Councilwoman Kathy Santoro said residents near the road complained of the sound from the brakes waking them late at night.

Veterans Drive was built as an industrial access road to businesses on the city’s west side to divert large trucks from state Route 2 in an effort to reduce congestion and address the vehicles’ difficulty in turning onto side streets.

City officials noted a fence was built between it and existing nearby homes, it has provided some privacy but not shielded residents from the sound of the trucks.

Their complaints have been directed particularly at the use of Jake brakes. Also known as compression release brakes, they allow truck drivers to slow their vehicles without applying foot brakes by releasing compressed air from the cylinders of their diesel engines.

They often are used when descending a steep grade and are said to help extend the lives of brake shoes by preventing them from being overheated. But even representatives of the trucking industry have acknowledged they produce a loud rumble, which some have compared to a large lawn mower. As a result, they have been banned in some residential areas.

Council members and other city officials discussed reinforcing the fence to block the sound and approaching local business leaders for help in addressing the problem.

Council also approved the hiring of lifeguards and other summer help after deciding last week to reopen the city pool and parks while following recommendations by public health officials to deter the spread of COVID-19.

They include reducing the number of patrons to 25 at a time, regularly sanitizing the restrooms and other common areas and removing the pool benches.

As a cost-saving measure, the pool won’t be heated.

Mayor David Velegol Jr. praised the efforts of Pool Manager Gus DiMarzio and his staff for preparing the pool for reopening, noting he and others visited pools at Wheeling Park and Oglebay Resort to learn measures being taken there.

Playground structures at the city’s parks also have been reopened after being barricade following the shelter-in-place order.

City officials said an effort will be made to keep them clean, but parents and guardians are encouraged to bring blocked wipes for their children.

In related business, Velegol said he and City Manager John DeStefano are exploring the demolition of Follansbee Park’s current restrooms, which he said are deteriorating from age, and replacing them with facilities closer to the pool.

Santoro said until that happens, city crews need to address a sticking door there that had to be forced open to free a woman attending the Christmas in the Park festival.

In other business, council:

¯ Heard from Brent Burton of Assured Partners, its current liability insurance carrier; and Doug Velegol and George Gresko, both of Assure America, who are interested in serving the city when its current policy is up for renewal in July.

The mayor noted Velegol is his brother and said he will abstain from acting on the matter.

Velegol said Pendleton aided the city at various times during his 32 years with the steel firm, including the 2016 flood; and supported the company’s leaders in sponsoring the city’s new ball field in 2017.

¯ At the start of the meeting, observed a moment of silence at the request of Velegol, who suggested thoughts and prayers for the nation as it recovers from the pandemic and faces unrest over the death of George Floyd.