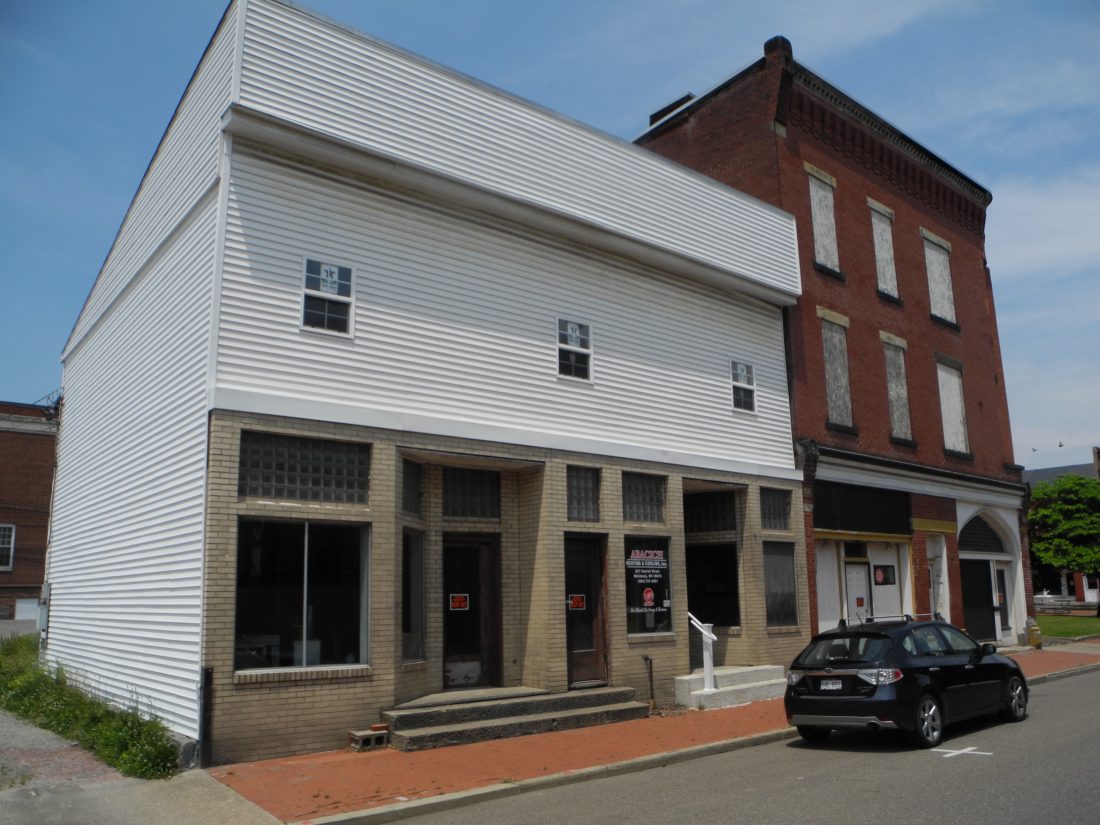 SET FOR DEMOLITION. Two adjacent buildings formerly owned by Aracich Heating & Cooling on Charles Street in Wellsburg are slated for demolition by the Brooke County Commission, which plans to create additional parking space there. -- Warren Scott

WELLSBURG –The Brooke County Commission, Friday, approved a new resolution supporting the construction of a natural gas-fired power plant in the county and opened bids for the demolition of two buildings on Charles Street in Wellsburg.

County Commissioner Stacey Wise said the resolution was requested by Energy Solutions Consortium Brooke County Power I as it complies with new financing requirements for the plant’s construction that require the company to secure 25 percent of its funding up front.

The resolution states the 920 megawatt power plant will consume $177.5 million in natural gas annually and is expected to support hundreds of jobs, directly or indirectly.

A previous county commission and the county’s school board signed in lieu of taxes payment agreements that call for the county to receive at least $27.3 million over 30 years.

The commissioners didn’t have a timeline for the plant’s construction but believe the financing agreement may be one of the last hurdles to its becoming reality.

In March ESC announced Gemma Power Systems of Connecticut had signed with the company for the engineering, procurement and construction of the plant, which is slated to occur on Quinn Lane in the Cross Creek area.

The commission met Friday because it won’t be meeting on Tuesday, in light of the state’s primary election, and it was scheduled to open bids for the demolition of two buildings it acquired at 627 and 635 Charles Street in Wellsburg.

The commission received two bids for the work — $63,445 from Keith Yost Excavating of Wellsburg and $115,000 from Keesto Contracting of Wellsburg — and agreed to table them for further review.

Formerly owned by Aracich Heating & Cooling, which has moved to a building along state Route 2, the properties were bought for $10,000 by the commission, which plans to raze them to create more parking space for the county courthouse.

Thomas said the buildings are in poor condition, with a buckling floor in one, and aren’t good candidates for new occupants.

The commissioners said an inspection for asbestos was ordered but they haven’t received a report yet.

The buildings sit near Wellsburg City Hall, and the commissioners have discussed offering the space to the city in exchange for city parking space behind the 232-year-old log house at the corner of Charles and Sixth streets.

The log house was moved from elsewhere in the city when the removal of its clapboard exterior revealed it to be a two-story log structure built by Alexander Wells, an early resident.

The commissioners reiterated there are no plans to raze that structure.

“We have no plans to do anything but maintain it,” said Thomas.

In other business, County Clerk Kim Barbetta said press and public visiting the courthouse on Tuesday night for election results will be asked to gather outside to comply with spacing recommendations during the pandemic.

Polls will be open from 6:30 a.m. to 7:30 p.m. at the county’s polling places, which haven’t changed since the last election.

The commission also announced it will accept, for two weeks, letters of interest in a seat on the county’s solid waste authority, whose term is up soon.

(Scott can be contacted at wscott@heraldtaronline.com.)