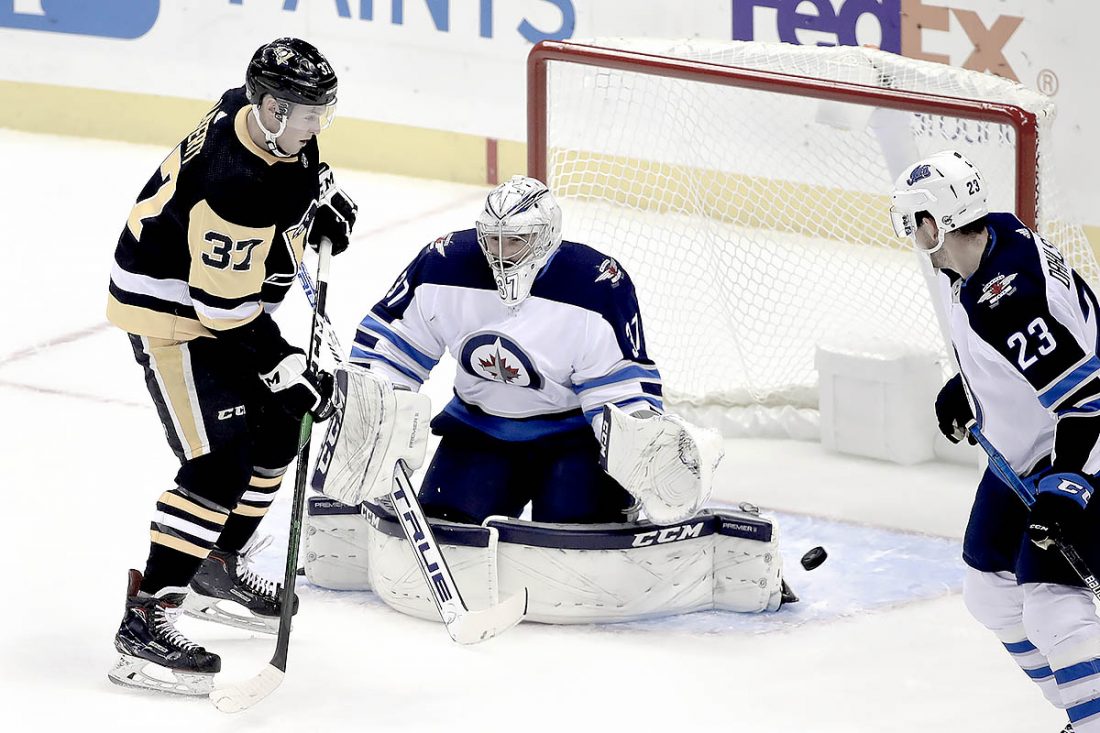 PITTSBURGH — The youngest member of an inexperienced Winnipeg Jets defensive unit led the way to a big win.

“It was a good moment for me,” the 18-year-old Heinola said. “It was exciting. Of course, I was dreaming of that.”

The Jets got their first win in Pittsburgh since returning to the NHL in 2011. The Penguins previously won 18 consecutive home games against the Jets-Atlanta Thrashers franchise dating to March 24, 2007. Pittsburgh’s last loss against Winnipeg at home came on Dec. 27, 2006.

Tucker Poolman scored his second NHL goal and Neal Pionk his second of the season as three defensemen scored for a young Jets blueline, which combined for 350 career NHL games.

“Those guys have worked really hard back there,” Jets coach Paul Maurice said. “They’re learning every shift. I thought they were great.”

Nikolaj Ehlers scored his first of the season, while Patrik Laine and Mark Scheifele both had three assists for the Jets, who closed a season-opening, four-game road trip. Connor Hellebuyck made 36 saves in his second start of the season.

“I thought the guys in front of me played very hard,” Hellebuyck said. “They were blocking shots at the right time and controlling shots from the outside. It was a team win.”

Sidney Crosby scored his first of the season and Matt Murray stopped 17 shots for Pittsburgh, which routed Columbus 7-2 on Saturday.

Jets defenseman Dmitry Kulikov was granted a personal leave of absence, while Josh Morrissey missed his second straight game after sustaining an upper body injury during warmups before Sunday’s loss at the New York Islanders.

The Jets played Tuesday without six defensemen from last season’s team, which lost to eventual Stanley Cup champion St. Louis in the first round of the playoffs. The list includes Kulikov and Morrissey, while Dustin Byfuglien remains away from the team on a personal leave. Winnipeg traded Jacob Trouba to the New York Rangers, while Tyler Myers and Ben Chiarot left in free agency.

Heinola, Poolman and Pionk provided not only defense but scoring.

“We all went through training camp together, so we all got to know each other pretty well,” Pionk said. “We created that bond in training camp and went from there.”

Pittsburgh had injury troubles of its own as Evgeni Malkin and Nick Bjugstad were recently placed on injured reserve after leaving Saturday’s win against Columbus with lower body injuries. Sullivan said both will be out long term. Patric Hornqvist also left Tuesday’s game with a lower-body injury.

“We had a shortened bench for a lot of the game and the guys competed pretty hard,” Sullivan said.

Crosby opened the scoring 32 seconds into the game. He was alone at the top of the crease when he redirected Jake Guentzel’s pass past Hellebuyck.

Heinola, the 20th overall pick in this year’s draft, scored his first NHL goal at 5:48 of the period. Heinola’s shot from the top of the left circle snuck underneath Murray’s glove to tie the game.

Ehlers gave Winnipeg a 2-1 lead less than five minutes later. He pounced on a turnover at Pittsburgh’s blue line and ripped a short-side wrist shot past a standing Murray.

Poolman put Winnipeg ahead 3-1 just 54 seconds into the second period with a blocker-side wrist shot from the slot.

Pionk made it 4-1 midway through the second. It was the third goal scored by the Jets’ young defensive corps, more than enough to beat Pittsburgh on this night.

“I thought they were fantastic,” Hellebuyck said. “They were blocking shots, they were controlling pucks and they did exactly what they were asked to do. I think as the game went on, they got even better.”

Crosby passed Jean Beliveau for 41st on the NHL’s career points list. . Pittsburgh’s Brandon Tanev played against his former team. Tanev, who signed a six-year, $21-million contract in July, set career highs last season with the Jets and scored 24 goals and 51 points in 195 games. . Penguins D John Marino and F Sam Lafferty made their NHL debuts. Lafferty grew up less than 100 miles from Pittsburgh. . The Penguins have won 15 of their last 20 games overall against the Jets.