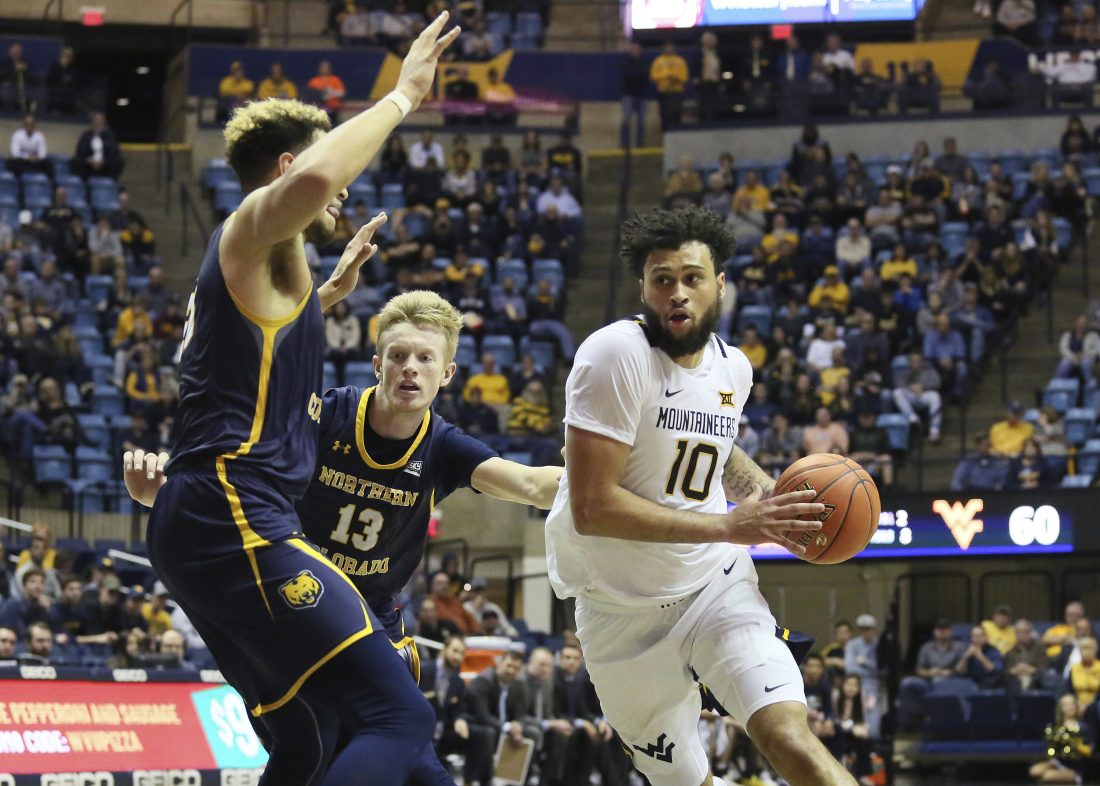 West Virginia's Jermaine Haley(10) is defended by Northern Colorado's Kai Edwards(25) and Bodie Hume(13) as he drives it up court during the second half of an NCAA college basketball game Monday Nov. 18, 2019, Morgantown, W.Va. Haley scored 18 points against Northern Colorado. (AP Photo/Kathleen Batten)

Culver and Haley combined for all of West Virginia’s points in a late 10-0 run that enabled the Mountaineers to pull away for a 69-61 victory over the Bears on Monday night.

West Virginia was headed for its second straight blowout win, but Northern Colorado’s Bodie Hume hit 12 of his 18 points in the second half as the Bears took advantage of West Virginia’s defensive lapses.

“We’ll get up on teams big, and we’ll start playing lazy and get comfortable,” Haley said. “That can’t happen.”

Haley finished with 18 points and 12 rebounds while Culver, who sat out the first half, added 13 points for the Mountaineers (3-0).

“I’m just staying aggressive wherever coach puts me.” Haley said. “I think if you rebound the ball at a high level then you’re going to get easier shots.”

“I think the whole thing started in the first half where we got up, and then we got a little giddy with it and threw it around a little bit,” said West Virginia coach Bob Huggins. “We didn’t guard. We quit guarding the way we were guarding. We guarded pretty well for a while.

“When the score was tied, we guarded better again.”

The Bears never retook the lead. Culver then scored six points and Haley four during the key run.

West Virginia guard Taz Sherman said that when Culver gets into the game, “you feel his presence. Offensively, defensively, you can just feel that Derek Culver is there.”

Huggins didn’t specify why Culver didn’t play until the second half.

Northern Colorado: The outsized Bears held their own in the paint while relying heavily on the 3-point shot, making 8 of 30 (27%).

West Virginia: The Mountaineers shot 57% (16 of 28) from the floor in the first half but lost its shooting touch after the break (10 of 28). West Virginia used a smaller lineup against the Bears and still outrebounded them 42-24.

West Virginia’s Oscar Tshiebwe was held to four points and seven rebounds in 19 minutes after scoring 20 points and grabbing 17 rebounds Friday in a win at Pittsburgh.

West Virginia forward Emmitt Matthews appeared to hyperextend a knee going after a rebound in the first half. He got up gingerly, made a free throw, then went to the bench but returned in the second half. He said on Twitter after the game that he was fine.

Foreign students weigh studying in person vs. losing their visas