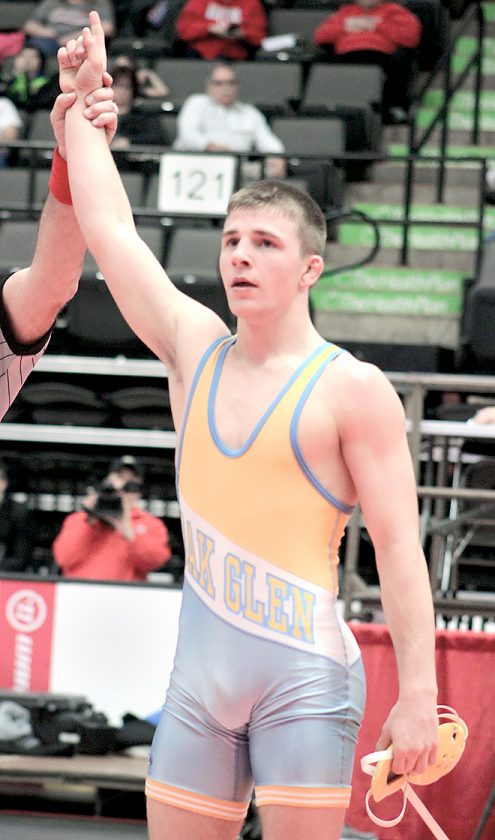 WHEELING — Last year, Steubenville’s Ethan Pappas and David Tuttle both came up short in the OVAC finals. This year, they came up big, both taking home the crown in their respective weight classes at the 67th annual OVAC Ron Mauck Wrestling Championships Saturday at Wheeling’s WesBanco Arena.

“I couldn’t have asked anything more from Ethan this weekend,” Big Red coach Mike Blackburn said. “He came out and had a real exciting final match against a real good wrestler. He went after it and got a big win.”

Tuttle, the top seed at 182, defeated Southern Local’s Hunter Morris, 4-2. Tuttle pinned his way to the finals, including pins of five and seven seconds in the first two rounds and recorded his 150th career win in the semifinals. Tuttle, the No. 4 wrestler at 182 in Ohio Division II, finished his OVAC career as a four-time placer.

“David had a great weekend,” Blackburn said. “The year started out a little shaky, but once he got down to 182 and settled in, he started wrestling well and wrestling like himself. And, it was nice to see him it win it.”

“Obviously, you want to see all your guys in the final win, but sometimes it’s not in the cards,” Blackburn added. “Overall, I thought we wrestled well as team. Now we just want to keep improving and turn our attention to sectional, districts and states.”

Oak Glen’s Peyton Hall — the most decorated wrestler in OVAC history — made his fourth OVAC appearance and won his third title. Hall, the No. 4 wrestler in the nation, defeated the No. 9 in Parkersburg South’s Brayden Roberts. Both WVU commits battled to a 3-2 final. With the match tied 1-1 with a minute and half remaining, Hall proved too quick and took Roberts to the mat for a takedown, 2 points and ultimately the win.

Hall finishes his OVAC career as a four-time finalist and a three-time champion. The two-time WVU state champion is also the only wrestler in OVAC history to win the Bierkortte Award as a freshman.

ON THE RIGHT SIDE OF THE PODIUM

Brooke’s Max Cammiletti and Danny Yost both won their last match of the night. Camilletti, who picked up his 100th win on Friday, placed third at 170. Camilletti is now a two-time OVAC placer and is ranked third in West Virginia at 170. Yost took fifth at 113.

After coming up one point short against No. 1 seeded Logan Ours in the 32-pound OVAC semifinal, Weir’s Wyatt Conley went on to take fourth. Fellow Red Rider and Conley’s cousin, Logan Walters, placed seventh at 182.